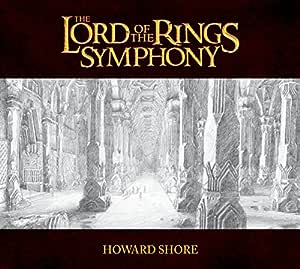 The Lord of the Rings Symphony

4.6 out of 5 stars
4.6 out of 5
142 global ratings
How are ratings calculated?
To calculate the overall star rating and percentage breakdown by star, we don’t use a simple average. Instead, our system considers things like how recent a review is and if the reviewer bought the item on Amazon. It also analyzes reviews to verify trustworthiness.

J. Terrill
5.0 out of 5 stars Well worth the money for any fan of the trilogy instrumentals.
Reviewed in the United States on May 21, 2015
Verified Purchase
I have been looking for a version of the soundtrack that includes "the lighting of the beacons." This cd caught my eye due to the many scores from the movies that are not included on the the instrumentals that are currently on sale. The only way to get some of these "rarer" scores is to purchase the expensive complete recordings for each of the Lord of the Rings movies that are no longer in print. This is a relatively inexpensive alternative. While not everything is included (and some scores are altered from the originals), most scores are covered.

What is most striking about this disc is the fact that each "symphony" is about half of the recognizable tracks from each of the Lord of the Rings movies. For example, symphonies 1 and 2 are from Fellowship and so on for each of the six. I get the feeling like Shore intended for each of these symphonies to be listened to in their entirety and most preferably in one sitting. Each symphony takes on its own life as it takes you back in your mind to many of the scenes and struggles that occurred within Middle-Earth.

I highly suggest this to anyone who is a fan of the movies and is amazed at how cathartic a soundtrack can make one feel while watching a movie. Not only does this collection of symphonies do the movies justice, it helps to take you back to that magical place. Let your mind roam in the Middle-Earth written by JRR Tolkien, brought to life on screen by Peter Jackson, and given a soul by Howard Shore.

mojo1633
4.0 out of 5 stars Phenomenal - it's about time!
Reviewed in the United States on September 19, 2011
Verified Purchase
Firstly, this isn't a review of the music itself, but of the structure of the Symphony and the performance of the musicians. I assume anybody reading this already has knowledge and appreciation for Howard Shore's music, which on its own terms is 5-star, must-own stuff.

Now that's out of the way, what of the Symphony? To call it a symphony is something of a stretch, since it doesn't follow the structure of a traditional classical symphony. Basically, The Lord of the Rings Symphony is a very long, comprehensive suite representing music from the scores of all three films. There are six movements; two movements apiece for each of the films. Consider it a highlight reel of the best moments from the scores. Nothing will ever replace hearing the scores in their gargantuan entirety, but listening to the Symphony is a wonderful experience on its own. Although many may have preferred a true 'symphony' in the classical sense, organized by theme and counterpoint, etc., that seems somewhat illogical given the subject material. Instead, the Symphony follows the narrative structure and order of the films. It's like Cliffs Notes for the original scores. Frankly, the work would be far more appropriately called a suite, similar to a lengthy ballet suite, but oh well, it's the content and not the title that's important. Also, if you or someone else you know has previously managed to avoid hearing Shore's music, the Symphony would be a great introduction.

As far as the performances themselves, I was skeptical considering I haven't previously heard of the 21st Century Symphony Orchestra (the name sounds cheesy), nor of Ludwing Wicki (conductor). I was fortunate enough to attend a concert with Shore himself conducting the Atlanta Symphony Orchestra and Chorus, and the results were unforgettable. Needless to say I had very high expectations for an eventual recording of the Symphony, but much to my dismay, one was never released despite the release of the Complete Recordings and the Rarities Archive. That makes this recording an unexpected surprise, timed to coincide with the 10th anniversary of the first film. Thankfully, my concerns were assuaged. The performance of the 90-piece, German-based orchestra and around 100-strong semi-professional chorus was fabulous. The brass in particular rose spectacularly to the occasion. Even the soloists did their best to imitate the originals with acceptable results. Thanks to maestro Wicki, the pacing is accurate and clean, though at times it can seem a little rushed. Again, probably nothing will best the original performances by the London Philharmonic, but these performances often compare favorably to the interpretations of on-album excerpts by the City of Prague Philharmonic and Cincinnati Pops. The only real knock I give this recording is that, as a result (I assume) of being recorded live, the sound quality suffers a bit. That's not to say it's bad (it's actually decent), but the stereo separation doesn't feel as immersive and it's more difficult to pick out individual instruments. Although audience noise is thankfully limited, there are two moments of applause on the recording - the first is after the second movement, and the second is after the last movement. Keep in mind this is a review of the digital album I purchased on Amazon, but I imagine the standard CD listening experience would be very much the same.

All in all, purchase this recording if you have any appreciation for Shore's magnum opus! I guarantee you'll be glad you did. I hope more recordings of the Symphony by other well-known orchestras will follow.
Read more
76 people found this helpful
Helpful
Comment Report abuse

scm88keys
5.0 out of 5 stars Fantastic Arrangement of a Marvelous Score
Reviewed in the United States on March 4, 2013
Verified Purchase
Although many avid fans of Howard Shore's music to the Lord of the Rings will certainly enjoy this, I believe this is the perfect album for those who love the movies and their music but are not particular about hearing every cue and square inch of the score, which is a dauntingly long listen. As all the great themes keep going in and out, I can "see" the movies progressing from start to finish at a surprisingly pleasant pace, despite plowing through all three in less than two hours. Often I am bored by movie soundtracks, waiting for the great themes and moments here and there while drudging through a lot of filler that isn't terribly amazing without the film accompanying it. It is impossible for me to separate images of the film while listening to this, but I honestly feel that these arrangements are a fine musical telling of the story that stands alone from the film itself. Perhaps only someone who listens to this before watching the movies can confirm or deny that claim, but how many of those people will buy this? Bottom line: A wonderful, captivating and nostalgic listen, capturing all the great moments from the film score without requiring a full day's worth of time.
Read more
4 people found this helpful
Helpful
Comment Report abuse

This symphony does have a role though. The original soundtrack is, of course, a movie soundtrack. Some of the movie tracks fit the movie well but don't make for light listening (particularly the Orcs' themes). I've tried studying with the movie soundtrack on, but sometimes some of the tracks are just too overpowering and distract me. The symphony score by contrast is perfect for relaxed listening. You can have it on in the background when you study or work. As such, for the price, it's a nice way to enjoy the LOTR soundtrack in a different setting.
Read more
5 people found this helpful
Helpful
Comment Report abuse
See all reviews

A. J. Montgomery
5.0 out of 5 stars Symphony version of The Lord of the Rings Film Score.
Reviewed in the United Kingdom on September 15, 2014
Verified Purchase
I enjoyed this very much. Of course it is not the whole film score for all three movies but rather a distillation of the essence of the films condensed into one manageable symphony. Quite a task to do and one that I think has been well done. It is inevitable that for some a meaningful or favourite bit has been missed out- for me it was Enya's closing melodies and songs from the first film. However I think the final product has been well crafted and should bring pleasure if you enjoyed the films.
Read more
9 people found this helpful
Report abuse

G V Rooke
4.0 out of 5 stars I really enjoyed this and I am glad I bought it
Reviewed in the United Kingdom on December 7, 2014
Verified Purchase
I really enjoyed this and I am glad I bought it. It retains most of the best themes and moments from the film but I have to say the songs (closing credits of each film) sit rather oddly in the format of a symphony. Also it has a really odd "finale" that sounds as if it is lifted direct from Wagners Das Rheingold - it doesn't sound like the rest of the piece and just feels as if it was tacked on so that the symphony didn't end with the song Into the West. I think I will have to get the original soundtrack as well as there are moments of the symphony where I feel a bit "short-changed" because the music does not go quite where I expect it to!
Read more
5 people found this helpful
Report abuse

Amazon Customer
5.0 out of 5 stars Even better than expected
Reviewed in the United Kingdom on June 9, 2015
Verified Purchase
Quite expensive but it is worth it. It covers the incredible range of the films and it must have been a difficult task to condense the hours and hours of score into this coherent piece. Well done Mr Shore!
Read more
2 people found this helpful
Report abuse

Gerjo Kok
5.0 out of 5 stars I keep listening
Reviewed in the United Kingdom on May 9, 2019
Verified Purchase
I love the LotR movies and the music, but the sound track is impossible as you need to adapt the volume all te time. This symphony is fantastic. I keep listening to it.
Read more
Report abuse

Adele
5.0 out of 5 stars Well worth the investment!
Reviewed in the United Kingdom on December 28, 2016
Verified Purchase
Fantastic soundtrack divided into movements. It's a comprehensive, live recording of the best Lord of the Rings music and it does not disappoint!
Read more
Report abuse
See all reviews