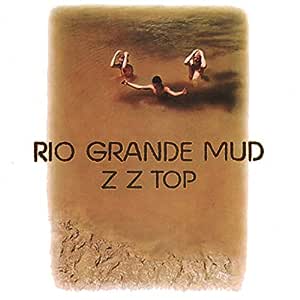 Add to Cart
$13.32
+ Free Shipping
Sold by: uniqueplace-usa
Have one to sell?
Sell on Amazon

4.6 out of 5 stars
4.6 out of 5
158 customer ratings
How does Amazon calculate star ratings?
Amazon calculates a product’s star ratings based on a machine learned model instead of a raw data average. The model takes into account factors including the age of a rating, whether the ratings are from verified purchasers, and factors that establish reviewer trustworthiness.

theodore Knapinsky
5.0 out of 5 stars An excellent album to add to your blues/rock collection.
Reviewed in the United States on March 5, 2015
Verified Purchase
Rio Grande is ZZ-Top’s sophomore effort. A kick-ass effort, from start to finish.
The band starts off with “Francine”. “Just Got Paid,” a track that would become a
prime cut on album oriented rock radio (AOR) in the early seventies.
ZZ-top’s music is rooted in the blues and Billy Gibbons homage tribute to
Muddy Waters on “Mush Mouth Shoutin” is a fine example.
“Ko Ko Blue” is another fine track. “Chevrolet” is the last track plays this live it is a
tours de-force.
Side two is an instrumental “Apologies to Pearly is a good blues number with a dose of southern rock and country thrown in.
“Bar B-Q,” and “Sure Got Cold After The Rain Fell.” “Whiskey ‘n’ Mama” is a good funky number.
“Down Bownie” rounds out the last track on side two. An excellent album to add to your blues/rock collection.

Santeria
5.0 out of 5 stars Grand Music; Play in the Mud !!
Reviewed in the United States on April 2, 2012
Verified Purchase
I do not totally recall when I found ZZ-TOPs music, but I know that once i bought the 90s best of CD, I had it on
high rotation when I got the disc. After a lot of experience with the mythos of the hirsuite ones distinct tones,
after catching a DVD LIVE IN TEXAS, I decided to go back to go forward. At the current time I bought RIO GRANDE MUD , and DE GUELLO pretty close together, so I put the music on one cd, and played it continuously. Since RIO
GRANDE MUD is 1972, and DE GUELLO is 1979, you get a feel for the change they went through. For a better overview
play Triple X after these two, and the cycle is pretty well complete. The three cover about 3 decades. The impressive part is that the playing is still great, and the sound is distinctive. All I found that was somewhat
less on RIO GRANDE was the lower bass guitar level, and a few more instrumentals were tossed in for good measure.
What was interesting was how the instrumental chord progressions were later used to good measure in some great
songs. Whilst DEGUELLO is closer to their distinctive sound overall, I would venture to say that their playing is
still basically the same, and the ability to buy the finest instruments allowed them to hone their place as the
greatest little ol band in Texas. Whatever album you choose, there are some fine pieces of work, and also this CD
has a pic of Billy on the inside cover without a beard, so its a pretty neat CD.
Read more

Joseph C. Kelly
2.0 out of 5 stars DON'T BUY THIS REVERB-FILLED REMIX
Reviewed in the United States on March 26, 2017
Verified Purchase
A solid album, but the remix is a bad idea. The original mixes were tight, and I've gotten used to classics like "Francine" and "Just Got Paid" in their original mixes. Then they went and remixed this and added a lot of reverb. It's a mistake and unnecessary. I wish that I had read the reviews prior to purchasing this.
Read more
2 people found this helpful
Helpful
Comment Report abuse

Joshua Leeger
5.0 out of 5 stars I love ZZ Top, so this review is biased...
Reviewed in the United States on September 5, 2016
Verified Purchase
I love ZZ Top. And though there are arguments about the production-value of this CD, I could find no other way to obtain this album in an electronically-reproducible format (I don't have a turntable anymore). So here it is. Love it or leave it.
Read more
2 people found this helpful
Helpful
Comment Report abuse

g-man
5.0 out of 5 stars The old ZZ Top is the Best!
Reviewed in the United States on February 2, 2013
Verified Purchase
My first ZZ Top album was Tres Hombres, which came after Rio Grande Mud. Then I went back and bought Rio Grande Mud after that in about 1974. It was on 8 track. I got this one on CD, because I haven't had a way to listen to the old 8 track tapes for decades. Rio Grande Mud may have been the best ZZ Top of all. Those old songs like Down Brownie, Ko Ko Blue, and Whiskey and Mama are soooooo good!

This is definitely the old ZZ Top. They took some time off before Dequello, and the band changed a lot on that album. Since then the evolution has been more gradual. I had really forgotten how good and raw the old stuff was.
Read more
3 people found this helpful
Helpful
Comment Report abuse

D. J. H. Thorn
4.0 out of 5 stars The band no one would follow on stage
Reviewed in the United Kingdom on October 24, 2008
Verified Purchase
ZZ Top were already the finished article by the time they made this album. 'Rio Grande Mud' is the work of a confident, highly able unit. Billy Gibbons's distinct hard-fuzzed guitar sound is recognisable throughout and the band's collective high-octane blues is just as consistent. Indeed, the main reason for buying this is to savour the execution. The material is consistently good, rather than great, but made better by the performance. 'Francine', which opens the album, is the most instant track, though it's rather obviously modelled on the Stones' 'Brown Sugar'. 'Bar-B-Q' is the most successful example of their high-powered rock, while the long, slow 'Sure Got Cold After The Rain Fell' and the harp-flavoured 'Mushmouth Shouting' lean more toward blues roots. ZZ Top's early albums are their most rewarding and this is a great example of that.
Read more
4 people found this helpful
Helpful
Sending feedback...
Thank you for your feedback.
Sorry, we failed to record your vote. Please try again
Report abuse

70's rock lover!
5.0 out of 5 stars Fab!
Reviewed in the United Kingdom on May 1, 2017
Verified Purchase
Great. My personal favourite album I have of their's, (the other two being Tres Hombres and Fandango!. Great boogie Texas rock.
Read more
Helpful
Sending feedback...
Thank you for your feedback.
Sorry, we failed to record your vote. Please try again
Report abuse

Mrs. Jayne E. A. Brookes
5.0 out of 5 stars Five Stars
Reviewed in the United Kingdom on July 31, 2016
Verified Purchase
Love this CD,great to add to ZZ tops collection i am obtaining....
Read more
Helpful
Sending feedback...
Thank you for your feedback.
Sorry, we failed to record your vote. Please try again
Report abuse

jacek handzlik
5.0 out of 5 stars Five Stars
Reviewed in the United Kingdom on December 19, 2015
Verified Purchase
The transaction was successful. I would recommend
Read more
Helpful
Sending feedback...
Thank you for your feedback.
Sorry, we failed to record your vote. Please try again
Report abuse

ARIS MOUTAFIS
4.0 out of 5 stars Four Stars
Reviewed in the United Kingdom on April 4, 2016
Verified Purchase
All Ok!
Read more
Helpful
Sending feedback...
Thank you for your feedback.
Sorry, we failed to record your vote. Please try again
Report abuse

Page 1 of 1 Start overPage 1 of 1
This shopping feature will continue to load items when the Enter key is pressed. In order to navigate out of this carousel please use your heading shortcut key to navigate to the next or previous heading.
Back
Next
Pages with related products. See and discover other items: Explore tools for beards