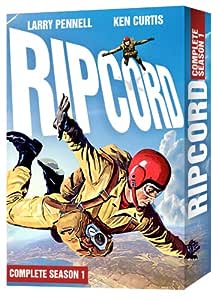 Operating their skydiving service company "Ripcord", Jim Buckley and Ted McKeever are able to get to places that others can't and get there much faster. This leads them on many exciting adventures from chasing bad guys to performing daring rescues.

4.2 out of 5 stars
4.2 out of 5
55 global ratings
How are ratings calculated?
To calculate the overall star rating and percentage breakdown by star, we don’t use a simple average. Instead, our system considers things like how recent a review is and if the reviewer bought the item on Amazon. It also analyzes reviews to verify trustworthiness.
Top reviews

Pvt. W. G. Kirby Amazon Customer
3.0 out of 5 stars FESTUS IN A PARACHUTE?
Reviewed in the United States on November 23, 2014
Verified Purchase
RIPCORD was a syndicated TV series in the early 1960s. It was the first ( and so far only?) program to incorporate sport parachuting into the weekly plot. The ripcord being the cable one pulls to open their parachute. Our heroes (Larry..or was that Ken?..Pennell and Ken Curtiss) were instructors at their own school teaching parachuting and the new sport ( then) of sky diving. Every week they sound up on a jam or equipment problem, aircraft problem, etc. Or they would be hired to do movie work, of just be out parachuting and get into an emergency situation where their skills were needed. It looks now like a lot of the parachute jumps were all shot in a few days and then the seasons stories were built around thus filming! The series was a popular enough entry to be renewed for a second year, now in color, when most TV networks were still shooting black and white. Plots were simplistic...but they had to be presented, enacted, and resolved all in 22 minutes, as it was a half hour commercial program....and those were the days when the stars were also expected to do commercials explaining how Chesterfield cigarettes made a more exciting day or what oil to use in the family car, etc. I got both years just for the nostalgia...expect no historical gems or great award winning acting! Both stars went on in Hollywood to movie and TV appearances. Ken Curtis had long been a feature film western movie actor , sharing the screen with John Wayne on many occasions( "THE SEARCHERS", "THE HORSE SOLDIERS") He was a singer in the "Sons of the Pioneers" in many movies, and later shared the small screen with Jim Arness as " Festus Hagen" on "GUNSMOKE"! You'll see Pennell in the movie "MIDWAY" and scores of other TV programs of the 70s through 90s!
I offer similar comments regarding Volume Two of this series.

ScorpioSeven
5.0 out of 5 stars My Skydiving "Inspiration"
Reviewed in the United States on October 9, 2013
Verified Purchase
I took up the sport of Skydiving (Parachuting) in 1967, based on this non-network TV series.

Larry Pennell and the late Ken "Festus" Curtis played Ted McKeever and Jim Buckley, the owners of a Skydiving School and "Skydivers for Hire" outfit, usually going "where no aircraft or vehicle can go," to perform rescues or make "emergency medical deliveries" to those folks who were isolated.

I have to give the writers of this half-hour series a lot of credit, being able to think up new situations every week, where only the skills of an experienced skydiver could "save the day."

Many kids like me (a 17-year-old) took up this sport, based only on watching this action-packed show, where, as Larry Pennell said at the beginning, "This is the most dangerous show on television, with everything being filmed exactly as it happens." There was NO trick photography of any kind. What you saw was what really happened.

If you let your own kids or grandkids watch this, expect them to want to start taking up Skydiving as a sport, just as I did.

Michael Lonestar
5.0 out of 5 stars Mindless Entertainment
Reviewed in the United States on September 15, 2013
Verified Purchase
I'm sorry. It's strictly an early 60's thing. Very simple plots and the good guys always win. Fights are always clean and the protagonists usually ends the fight in one punch. Fun to watch because nothing at all about his show is complicated.I was 6 or 7 when this originally came out and I became fascinated with skydiving and actually did a couple of jumps when I was in college. Not a lot of big name guest stars although Burt Reynolds is in one episodes. Pennel and Curtis work well together are believable even though some of the episodes are a little outlandish. It does have a Route 66 feel to a lot of the episodes because the majority of the scenes are outdoors. This season is in black and white while season 2 is in color. For the purists that expect complete episodes, you won't find it here. I remember each episode would have Pennell and Curtis talking to the camera and addressing the viewers about the sport of skydiving in thirty seconds. That clip does not appear in any of these episodes.
Read more
3 people found this helpful
Helpful
Comment Report abuse

Jeffrey Sage
4.0 out of 5 stars And you will enjoy it much better
Reviewed in the United States on June 4, 2018
Verified Purchase
It is a dated show. However, you have to go watch the series knowing that. Believe you are living in the time that the series was originally filmed. And you will enjoy it much better. To compare special effects and camera angles to that that of today is not fair. It's fun seeing actors who made their early appearances on shows like this. Season 1 has an early appearance of Burt Reynolds. i think the acting and plots were decent and I would recommend watching the series. The price is right and the quality is very good, for a series of this age.
What I did not like is the seller mailed the discs in a non-padded envelope.Luckily the discs are also protected by a decorative box that houses the plastic DVD holders Thus far have to seen any damage to the discs. I've finished the first three.

J. Williams
5.0 out of 5 stars Great Series
Reviewed in the United States on October 30, 2013
Verified Purchase
I ordered the Ripcord Season 1 and Season 2 as soon as it was available. The picture and sound quality is excellent on all the episodes. The entire episode is shown each time along with the opening and closing credits. It looks like there were no shortcuts with Ripcord. Each episode begins with a skydiver leaping from a plane and Larry Pennell saying "This is the most danger packed show on television..." It really brings back the memories. Ripcord was a one of a kind series and is still enjoyable today, even if you have never heard of it before. I highly recommend this DVD set.
Read more
6 people found this helpful
Helpful
Comment Report abuse

M in Miami
5.0 out of 5 stars Great Series
Reviewed in the United States on September 21, 2013
Verified Purchase
I grew up with this show and seeing it as an adult it was just as much fun.. Not only that but my kids came back from collage and they liked it too...Plus I forgot what Ken Curtis looked like before he grew facial hair and became that American Icon Festus on Gunsmoke...It's so nice to see a show with imagination not to mention the cool 60's stuff and good morals..lt's funny as sometimes one has to go to the past to find progress... Wish they made more shows like this and less politically corect garbage like they try to force feed us these days....Thanks Amazon for giving us a choice.....
Read more
3 people found this helpful
Helpful
Comment Report abuse
See all reviews

De Vliegher Emiel
5.0 out of 5 stars Five Stars
Reviewed in the United Kingdom on April 20, 2015
Verified Purchase
same as for ripcord one
Read more
Report abuse

Prairie Girl
4.0 out of 5 stars Pleasant Suprise
Reviewed in Canada on May 30, 2014
Verified Purchase
I was too young to watch this when it aired on TV, but as a fan of older TV took a chance and ordered it.
I was very pleased with the quality and content. I quickly ordered season 2 as well.

Randal J. Wheeler
4.0 out of 5 stars Great Find !
Reviewed in Canada on November 22, 2013
Verified Purchase
This was a series I remember seeing in re-runs as a child.
Engaging stars , Larry Pennell and Ken (Festus) Curtis and exciting plots. Well done for its time. If you're a fan of early 60's TV, this is a great little series.