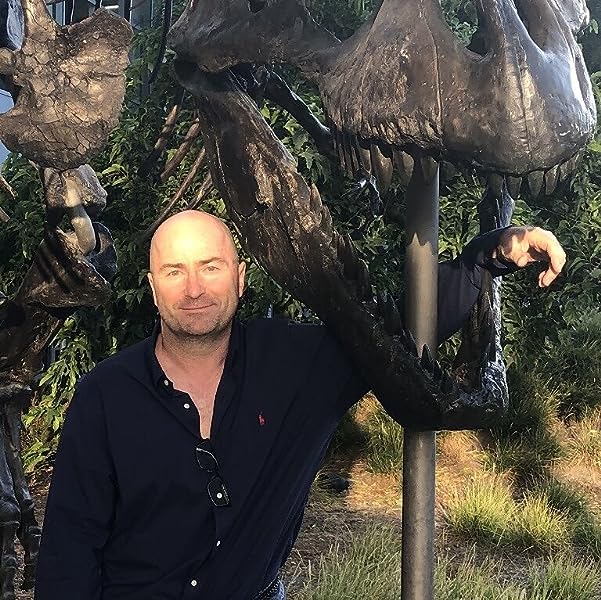 The Rise of Aeon Nous: The Utopian Conspiracy Paperback – January 15, 2021

by Tony Teora (Author), Patrick Turner (Illustrator)
4.0 out of 5 stars 48 ratings
See all formats and editions
Sorry, there was a problem loading this page. Try again.

What if a super advanced Artificial Intelligence (AI) computer discovered an apocalyptic extinction event but computed that humanity wasn’t yet advanced enough to stop the event? How could, or would, it help mankind to evolve before that destruction occurs? Aeon Nous is an extraordinary individual who saves the world from such an event in 2047, but at what cost ?

Move on to 2096:  Shu Franklin is a genius twelve-year-old boy who lives in a small Utopian town of Julian. Shu and his friends discover that their Utopian society is shrouded in dark secrets from the 2047 extinction event. They uncover a deadly secret about Aeon Nous. Will the truth set him free, or kill him and destroy Utopia?

A war of the mind, soul and future of humanity starts in this highly acclaimed science fiction adventure!

I wondered what the world would look like in 2096 if humanity survived to tell that story. It's estimated that 99.9% of all Earth species are extinct, so humanity needs to be careful, and we're really not--are we? Think of the environment and nuclear weapons. Most realize Artificial Intelligence (AI) will dramatically change the world in ways we really don't understand. I wondered how AI could help or destroy humanity? AI is a double edged sword--it can help or destroy mankind, and in this story it does both. The plot revolves around a boy named Shu who lives in a Utopian society where certain things about its history seem strange. Remember, the history of the world is written by its victors. The truth in this story is deadly. I wrote this to entertain those that enjoy old science fiction in a dystopian atmosphere with ending that I believe most fans of mysterious science fiction will love. There's a lot of SF nostalgia in the story. I built the base for my next two upcoming novels in the series (Darkness Descends and War of Ascension). I hope fans enjoy this story besides learning a little SF history.

Tony Teora is the author of six novels and various short stories. He lives in Sapporo, Japan, currently working on the dystopian Utopian Conspiracy series. For more information please go to the author's homepage: www.TonyTeora.com

4.0 out of 5 stars
4 out of 5
48 global ratings
How customer reviews and ratings work

Scarlett Jensen
5.0 out of 5 stars Saving humanity
Reviewed in the United States 🇺🇸 on March 30, 2021
Verified Purchase
An author who provokes thought, spreads fun and adventure.  He has a new SF dystopian series ‘The Utopian Conspiracy’. This book is the first book out of three titled: ‘The Rise of Aeon Nous’.  Book 2, ‘Darkness Descends’  is scheduled for publication soon.

In 2096 the world lives a clean, fresh water, safe and happy Utopian life—or so everyone thinks. Humanity survives because of ‘Aeon Nous’, a special man, who years back in 2047 along with his followers, saved the world from a mixture of natural and unnatural disasters called the Incendium.  Shu Franklin is about to turn thirteen at which age he becomes illuminated to adulthood facing truths that every young Utopian citizen should have.

Secrets of Aeon Nous and the Old Earth that remain—some of those secrets provide a glimpse into the extinction event Aeon Nous stopped in 2047. Much worse is to come. Facing extinction, citizens pass along one dangerous lie in the hope of saving mankind.  This lie incites a war of death and destruction.

Were they ever  living in 2096 ? In his remote viewing, Shu saw Old Earth cities and people, but Austin told him it was just a flashback to a previous time. It wasn’t a previous time. It’s now. Julian and the other Utopian cities are cut off from the outside Old Earth.

“Prison is not a place; it is a state of mind.” beyond Julian’s provincial confines. Illumination and adulthood occur concurrently at the age of thirteen for all Utopian children, and requires a completion of a rigorous curriculum of reading, writing, scientific studies, special projects (ESP, remote viewing, telepathy, and mind flashing), rhetoric, philosophy, athletics, and music programs. “

They tried to build a better world than Old Earth. Clean land for people who are free. People whose mental powers are not hidden or controlled.

Q-Bit predicted that all six Utopian cities would be destroyed if Aeon Nous was not discovered. It predicted that one person with special powers would arise from the cities, and that this person would save all the cities from an army of destroyers, just through his mind and the aid of his friends.

James and Maki, their son Shu somehow saved Julian and their sister Utopian cities from destruction. It was prophesied that  he’d defeat a small army trying to destroy him and his hometown in a desert battle. And two, he’d protect the other five cities by placing an angel in the sky.

What can you expect from this story?

AI intelligence, messy planet,  infiltration into Utopian cities. Military forces, electronic security, illegal bio-weapons, war, scientific advancements, National Security Agency. Disruption of cell phone reception, drone communication, US spy drones. There is a book : The first words in the book were: “A healthy mind sees truth, even if hidden through forces of evil. For peace and prosperity on planet Earth, each person born unto this world should have undeniable and equal rights toward the pursuit of happiness.”

The world lived in a vicious cycle of violence.

AI War of 2030 and the China Cyber War in 2040. Food shortages existed worldwide. Massive human migrations occurred as people desperately tried to escape from damaged eco systems. The following Incendium killed billions. If it wasn’t for the Supreme Sovereign, Aeon Nous, the human race would be extinct.”  Shu has vowed to not enter any living mind for the purposes of deceit, or to alter or extract private thoughts through mind- flashing,  telepathic energies.

Thought-provoking and many lessons learned from Shu.

Brian Aird
4.0 out of 5 stars Those Who Don't Learn From History...
Reviewed in the United States 🇺🇸 on March 20, 2021
Verified Purchase
The Rise of Aeon Nous by Tony Teora is a thought-provoking and very entertaining Sci-Fi futuristic novel.

The imagination and interest of the reader will be immediately captured and immersed into the depth of this novel as it begins with an exciting, intriguing and potentially dangerous discovery in a computer laboratory. It seems that an algorithm has been created and identified that accurately predicts future events at a 99.99% level of accuracy. The predictions of future events involve the social, financial, and aggressive activities as it relates to Earth's future.

Adding to the suspenseful beginning and setting the stage of the narrative is a powerful realization and revelation. The discovery of the mathematical and scientific algorithm to predict the future doesn't appear to predict any future events beyond the year 2047.

The story proceeds to transport the reader into the year 2096 with the introduction of the main character Shu Franklin. A utopian type of society has developed and at the age of 13 Shu, a bright, inquisitive and exceptional young man is on the cusp of moving into his level of illumination. He is about to be told great secrets, but he is sworn to secrecy and his failure to maintain the integrity of his vow is death.

In true characteristic style of any well-written novel, this particular book will not disappoint the reader. The development of the main characters, the story line and a number of surprising twists and turns await the fortunate reader.

Added to the mix are wonderful insightful quotes by various great historical minds. Some of those quotes included are authored by Stephen Hawking, John F. Kennedy, Socrates and George Orwell.

As a final note, although the book is very futuristic along with the reliance on artificial intelligence, the narrative is not too far-fetched and in actuality a number of thoughts and suggestions in the book correlate to what are happening today. Especially passages and quotes regarding truth.

For example, a quote by George Orwell is penned in this book. That quote states, "The further society drifts from the truth, the more it will hate those that speak it."

The Rise of Aeon Nous by Tony Teora is a quality written novel and will most probably stimulate the reader's imagination and their thinking.

Although a futuristic novel it certainly contains a number of thoughts and ideas that are relevant in today's world. The book develops the characters nicely and certainly it engages the reader as the plot unfolds.
Read more
Helpful
Report abuse
See all reviews