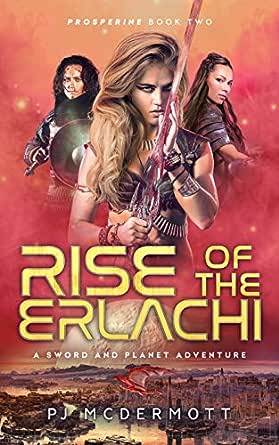 You've subscribed to A Fantastic Space Adventure Series With Strong Female Characters! We will preorder your items within 24 hours of when they become available. When new books are released, we'll charge your default payment method for the lowest price available during the pre-order period.
Update your device or payment method, cancel individual pre-orders or your subscription at
Your Memberships & Subscriptions
There was an error. We were unable to process your subscription due to an error. Please refresh and try again. 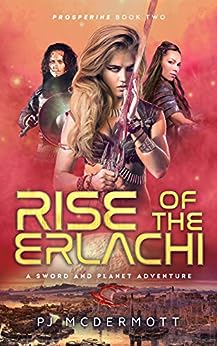 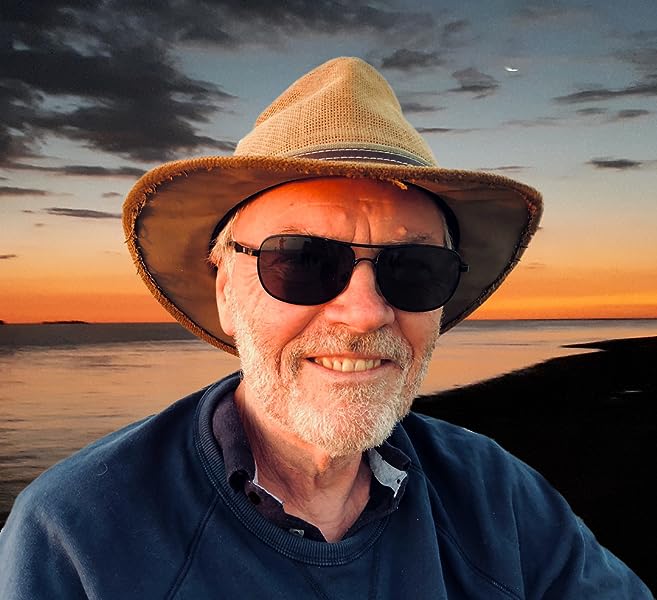 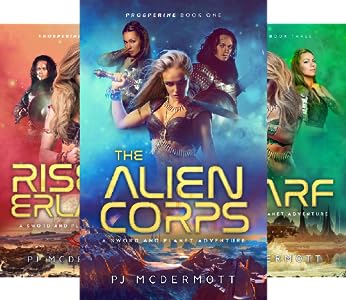 "This is a great Scifi for mysteries, action, Alien interactions, psy abilities and a classic writing style that evokes a wonderful nostalgia for readers that grew up on Simak, Heinlein and Anderson and is the perfect vehicle for introducing YA readers to Scifi in the classic style. A terrific read!" - Amazon Customer.

"Very readable, lots of action, a few twists and surprises....... I would recommend this series to anyone who enjoys well crafted sci-fi adventure tales.

Can't wait to discover what this author will offer next!" - Amazon Customer

PJ McDermott was born in his grandparents house in the town of Barrhead just outside Glasgow, but spent most of his growing up in Ferguslie Park, a notorious suburb of Paisley, where he developed a healthy appreciation for self preservation. In his teens and early twenties, PJ sang and played in a number of bands on the local folk circuit and pub scene. By twenty-one, a girlfriend convinced him to go to Glasgow University where he had a ball, and graduated Bachelor of Science. When he graduated, he met and fell in love with an Aussie girl who convinced him to return to Melbourne with her. Married to Susan, they now have two children (Fiona and Gillian) and two grandchildren (Mia, who is especially cheeky) and Ryder Patrick (who is too young to be cheeky yet - but is very cute). PJ discovered a love for writing and published his first book in 2014 - a coming of age novel titled Small Fish Big Fish, since fully re-visioned, revised and reissued. PJ is currently working on the third book in his science fiction series, the Prosperine Trilogy. The first two, Avanaux: A Hickory Lace scifi-fantasy adventure, and Rise of the Erlachi are available in paperback and eBook. --This text refers to the paperback edition.

Senecachile
5.0 out of 5 stars The second book in this series is as good as the first!
Reviewed in the United States on June 10, 2018
Verified Purchase
Hickory Lace and crew are better integrated and Hickory's abilities are growing. There is a flow new mysteries or Sentiences to add to the overall enigma of Prosperine. The man at the top, supposedly a good guy in the multiple organizations involved in developing /stealing Prosperine 's immensely valuable resource is a weasel, it seems, as well as Hickory's estranged father.

This is a great Scifi for mysteries, action, Alien interactions, psy abilities and a classic writing style that evokes a wonderful nostalgia for readers that grew up on Simak, Heinlein and Anderson and is the perfect vehicle for introducing YA readers to Scifi in the classic style. A terrific read!

Robert Von Mayr
5.0 out of 5 stars Great Adventure!!!!
Reviewed in the United States on November 14, 2019
Verified Purchase
The continuing tale of Hickory Lace and friends. Very readable, lots of action, a few twists and surprises....... I would recommend this series to anyone who enjoys well crafted sci-fi adventure tales.
Can't wait to discover what this author will offer next!

AJoekeen
4.0 out of 5 stars Intriguing series
Reviewed in the United States on August 12, 2017
Verified Purchase
Great read! Starts out a little slow, but we quickly meet more aliens as Hickory heads out on her next adventure. Perfect for sci-fi and fantasy lovers of all ages, this action-packed book keeps you hooked until the end. Looking forward to reading the rest!
Read more
Helpful
Report abuse

Kindle Customer
4.0 out of 5 stars Well Written 2nd book in Series Not a Stand-Alone
Reviewed in the United States on September 6, 2017
Verified Purchase
This is a nice tale with action, good drawn out characters, and a quest to find and return a magical sword. This is more of a continuation and works better if the reader has read the first book.
Read more
Helpful
Report abuse

Christian Abiodun Ibiloye
5.0 out of 5 stars HICKORY LACE ADVENTURE: Mission to retrieve the sword of Connat- sera-Haagar.
Reviewed in the United States on December 16, 2015
¡ïMission to retrieve the sword of Connat- sera-Haagar.
A beautifully written novellete, with a commendable discription of actions, moments and characters in engaging sequence of battles and funny conversations which I found most enjoyable. It is written in simple English; 16 chapters with a prologue and epilogue.
The SIM implanted humanoids, Commander Hickory lace, Jess parker and her son Gareth were sent on a mission to the Avanauri people not only to help the prosperine Erlachi but primarily to prevent Sequana from causing havoc. The Sword of Connat is looked upon by the Avanauri as a sacred relic and a powerful weapon which must not be in the wrong hands, in this case, Sequana- s¨¨r-Kiri, the defeated Pharlaxian rebel leader of which intelligence informed was on his way to Erlach, planning to raise an army.
It¡¯s imperative they retrieve the sword of Connat- s0Ò9ra-Haagar and return it to yonni.
Erlach is saved. Albetius, king once more, a generous and better ruler.
And, a week later, Hickory, Gareth, and Jess said their farewells and left for their own galaxy or planet.
The author seemed to relate the story to that of the World battling with the evil and negative energies, a form of Jesus (the Teacher) and the battle for survival.

Received a copy for unreciprocated and honest review.

There is excitement from the beginning of this quest, with a spaceship that almost crashes going through a meteorite storm to land on the planet where the quest will take place. The descriptions of the harsh alien natural world and the many dangers encountered by our group of heroes follow in quick succession after the landing. The “teacher” character provides a baseline philosophy for the work that turns out to be essential to the action that will end the novella.

I occasionally had difficulty following the political details that were described, mostly because the names of the characters and their races/political factions/worlds are unique to this series. But, I would recommend it for those interested in the action/science fiction genre.
I received a free copy of this book for an honest review.
Read more
Helpful
Report abuse

Page LaRue
4.0 out of 5 stars A Nice, Quick Read for Science Fiction/Fantasy Fans
Reviewed in the United States on December 2, 2015
In this quick read, Commander Hickory Lace and her group arrive on the planet Prosperine in a space ship. Their mission this time is to retrieve the stolen, magical (or not, depending on which of them you ask) Sword of Connat. The stakes grow higher as the story progresses and they are drawn into a war.

This is the second book of a trilogy and I didn’t read the first one. So perhaps that accounts for the trouble I had following what was happening at first. But after a bit, I got into the swing of it and enjoyed the semi-sentient flowers, wild colorful weather, fish that required tornadoes for mating purposes, and other world building oddities. I rooted for Hickory’s team in their hardships and battles.

I was given a digital copy of this book in exchange for an honest review.
Read more
Helpful
Report abuse

It's been six months since Hickory defeated the alien threat to Earth. Now a new menace has arisen. The magical sword of Connat-sèra-Haagar is missing and Hickory is ordered to return to Prosperine and find it. The quest takes Hickory to the rugged country of Erlach where she faces the terrifying Riv-Amok, a malignant creature with telepathic powers, then deep into the mountains where the rebel leader, Sequana, is using the power of the sword to rally the northern clans to war.

Ron Williams
5.0 out of 5 stars Mouthy monster
Reviewed in the United Kingdom on December 4, 2019
Verified Purchase
Not quite as good as book one . Still an unusual story plot with plenty of twists to explore and keep you guessing . It was a shame that the ending was very gripping but obvious.
Read more
Report abuse

Mandy Walkden-Brown
5.0 out of 5 stars An excellent sequel.
Reviewed in Australia on September 21, 2016
Verified Purchase
More exciting and daunting adventures for Hickory Lace and her team members, Jess and Gareth. This time they've sought the assistance of a couple men, space smugglers, always a useful resource when one wishes to sneak onto a planet in search of a missing weapon of legend.

Action, betrayal, discovery and an abundance of suspense kept the pages rapidly turning.

Strong, likeable characters with heart, strong world building and confrontations with both the unique and the aptly named creature, the Riv-amok and their old nemesis Sequana ensure that there's never an uninteresting moment.

Terrific second book of the series you won't want to miss. Now off to immerse myself in the third book of the trilogy, The Scarf.

EMcD
5.0 out of 5 stars Mc Dermott has done it again!
Reviewed in Canada on December 13, 2015
Verified Purchase
PJ McDermott has done it again! The Rise of the Erlachi continues to excite the reader with each page. The story with our now familiar characters and extremely complicated new ones is absolutely intriguing. Mc Dermott's describes and explains everything so well the story becomes real to you. Once again your tea gets cold while you are reading! What a talented author we have in our midst. I'm sure I'm not the only one waiting for the final episode, please don't let us wait too long Mr. Mc Dermott!
Read more
Report abuse

Aussie Reader
4.0 out of 5 stars The search continues
Reviewed in Australia on September 25, 2016
Verified Purchase
An intriguing series of fantasy. While not my normal style I am quite enjoying the tales of Hickory as she struggles to understand her world much like we try to understand our world.
Read more
Report abuse

Dave
5.0 out of 5 stars His best yet
Reviewed in Canada on November 15, 2015
Verified Purchase
Fantastic, cant wait for the third one
Read more
Report abuse
See all reviews