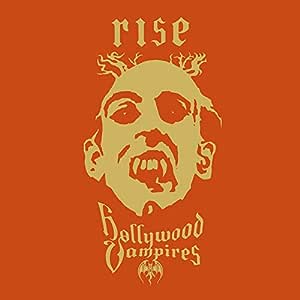 The Hollywood Vampires return with new music from their explosive second album, 'Rise.' Rock and roll royalty Joe Perry, Hollywood superstar Johnny Depp and shock rock icon Alice Cooper join forces once again for the unmissable rock album of 2019. Seconds into the opening track 'I Want My Now,' it's clear this supergroup has created something special - the chemistry between the individuals is unmistakeable when they come together on stage or in the recording studio. Forget the star-studded lineup's individual reputations, 'Rise' is some of the purest, unapologetic and most enjoyable rock and roll of the year, made by masters of the craft and true fans of the form. ''Rise' is not only a totally different animal than the first Vampires album, it is unique to anything I've ever been a part of. I approached it very differently than I usually do when working on an album. Each of us; Joe, Johnny, Tommy and myself have written songs on this album. What is different though is that I didn't try to change any songs to be more 'Alice-like.' Because each of us has different influences, the sound of this album is very cool. I think that with this album, we are establishing what the Vampires' sound really is, whereas with the first album we were more tipping our hats to our fallen rock n roll brothers.' - Alice Cooper

4.6 out of 5 stars
4.6 out of 5
292 customer ratings
How does Amazon calculate star ratings?
Amazon calculates a product’s star ratings based on a machine learned model instead of a raw data average. The model takes into account factors including the age of a rating, whether the ratings are from verified purchasers, and factors that establish reviewer trustworthiness.

AlienHunter47
5.0 out of 5 stars Rise (Above The Lies)
Reviewed in the United States on June 22, 2019
Verified Purchase
I loved the first HV album, but their followup is incredible. Most of the album consists of original songs this time and some of the other members take the lead on vocals, most notably Johnny Depp doing an incredible cover of Bowie's 'Heroes', which is a track I don't think I will ever get tired of listening to. Alice is top-notch as always and Joe Perry has a turn on 'You Can't Put Your Arms Around A Memory'. No auto-tune or synthesizers or whiny pop stars 'throwing shade' at each other. Just real musicians making real music. Hell yeah. ;)
Read more
32 people found this helpful
Helpful
Comment Report abuse

MAX
5.0 out of 5 stars Fun Stuff!!
Reviewed in the United States on June 21, 2019
Verified Purchase
You can tell by the opening track that this CD is going to be fun! That's what it sounds like and it reflects throughout the whole journey. There is nothing earth shattering but it sounds more like a real band now compared to the first disc.
Love it!!!!!

Cathy D.
4.0 out of 5 stars Great followup to their debut!
Reviewed in the United States on June 30, 2019
Verified Purchase
This is such a cool second album from this great supergroup! From the extended opening rocker, I Want My Now, to the ending track, Congratulations, the band continues the spirit of the first album of tributes to rock legends by adding a bunch of great originals. There are still some great new covers, including a punky People Who Died and a stunning Heroes, both sung to great effect by Johnny Depp, and Joe Perry's wonderful take on You Can't Put Your Arms Around A Memory. The Hollywood Vampires are proving that they're not just a novelty act but a genuine rock band. Can't wait until they release album #3!
Read more
8 people found this helpful
Helpful
Comment Report abuse

Scott W.
2.0 out of 5 stars Dud
Reviewed in the United States on June 28, 2019
Verified Purchase
What a dissapoint. I worship their debut CD and still play it. Ordered this without sampling. What made them great was the ability to take classics and interpret them, then spit out a fantastic rendition. They seemed to be having a great time.
This batch of songs is a departure from the formula. Sounds like egotists trying to go a direction they relesh but the songs are a once listen. Except Heroes, this sucks. I really had high hopes but I see I wasted $14. Back to the spectacular debut as it is perfect.

Stephen
5.0 out of 5 stars Amazing performances, fun songs and so much depth
Reviewed in the United States on July 12, 2019
Verified Purchase
I saw HV perform live right before this album dropped. They opened with I Want My Now, which works really well live. The video for Boogieman Surprise (with that awesome riff) was filmed at the show I attended. Johnny Depp kills with Heroes. One of the best covers of that song ever. But the part that gives me chills is hearing Joe Perry growl out You Can't Put Your Arms Around A Memory. There is so much in that performance, it is worth buying the album JUST for that song. And the end. We Gotta Rise. Above The Lies. We Gotta Rise. A true anthem. And so fun to sing along to live. Great songs, masterfully performed.
Read more
6 people found this helpful
Helpful
Comment Report abuse

Laura
1.0 out of 5 stars NOT for Alice Cooper fans!
Reviewed in the United States on June 21, 2019
Verified Purchase
Horrible. Do not go into this expecting an Alice Cooper album just because he does vocals. The instruments are slow, the songs are short and low mellow “rock” and the lyrics are lazy. HUGE downgrade from the first Vampires album!!
Read more
9 people found this helpful
Helpful
Comment Report abuse

Dirk Cunningham
5.0 out of 5 stars Rise proves to be better than debut album
Reviewed in the United States on June 23, 2019
Verified Purchase
Great album with some ear worms that really dig in. I’m glad there is more original material on this album.
Read more
8 people found this helpful
Helpful
Comment Report abuse

David
1.0 out of 5 stars Extremely disappointing
Reviewed in the United States on September 6, 2019
Verified Purchase
I'm a HUGE Alice fan so this hurts me to say, but this is garbage. The first album was mediocre at best, but this is terrible. The production, performances, and songwriting are all horrible. Every song is mid-paced and sludgy, and the interstitial "songs" are the very definition of pretentious wanking. This is a supergroup that is less than the sum of its parts.
Read more
3 people found this helpful
Helpful
Comment Report abuse
See all reviews from the United States

SomeoneElse. Official
5.0 out of 5 stars Brilliant
Reviewed in the United Kingdom on October 23, 2019
Verified Purchase
A change of direction from the first album but still too quality. Most of this album is original works and on the third play through I really got into it. Alice Cooper has forged a truly remarkable crew to crack out quality tunes.
Read more
Helpful
Sending feedback...
Thank you for your feedback.
Sorry, we failed to record your vote. Please try again
Report abuse

Paige liversidge
5.0 out of 5 stars Amazing product and came in amazing condition!
Reviewed in the United Kingdom on April 5, 2020
Verified Purchase
Came sealed and in great condition. I love it!
Read more
Helpful
Sending feedback...
Thank you for your feedback.
Sorry, we failed to record your vote. Please try again
Report abuse

Tyggerlily
5.0 out of 5 stars Rise
Reviewed in Canada on July 13, 2019
Verified Purchase
Best album of
The year! Totally impressive new album from The Hollywood Vampires. Intense and musically diverse. Every song is great, some stand out and you keep wanting to play and play them. I love "Who's Laughing Now". Johnny Depp has a beautiful voice.

Jason Hardy
5.0 out of 5 stars Impressed. Best Cooper effort in quite some time.
Reviewed in Canada on June 23, 2019
Verified Purchase
Great album. My favourite Alice Cooper effort since the Last Temptation in 1994. Stand out track, “ Mr Spider”. Something tells me this was in Alice’s back pocket since Along Came a Spider when he wanted to do a sequel. “Congratulations” is another top notch song worth the price admission to own this CD as well. Worth checking out. Ignore the Depp hype. This is still Alice’s thing.
Read more
One person found this helpful
Helpful
Sending feedback...
Thank you for your feedback.
Sorry, we failed to record your vote. Please try again
Report abuse
Load more international reviews

Francois Limoges
4.0 out of 5 stars Nice and Rocking
Reviewed in Canada on December 1, 2019
Verified Purchase
If you like old school Hard Rock that creeps up on you, this album is for you. Filled with catchy riffs that will slowly but surely creep up on you, the album will make each listening more enjoyable then the previous. Diverse album with well done covers and interesting original songs.
Read more
Helpful
Sending feedback...
Thank you for your feedback.
Sorry, we failed to record your vote. Please try again
Report abuse

Bob
4.0 out of 5 stars Good album..
Reviewed in Canada on August 9, 2019
Verified Purchase
Worth the purchase just for Johnny Depp's version of heroes..best song on the album
Read more
3 people found this helpful
Helpful
Sending feedback...
Thank you for your feedback.
Sorry, we failed to record your vote. Please try again
Report abuse

john p bower
4.0 out of 5 stars In my humble opinion this is not up to the same standard as the first disc
Reviewed in Canada on December 13, 2019
Verified Purchase
I bought this after really enjoying the first Hollywood Vampires disc. This one seems a bit contrived and not a whole as the first one was. Not awful just not as good as the first disc.
Read more
Helpful
Sending feedback...
Thank you for your feedback.
Sorry, we failed to record your vote. Please try again
Report abuse

Stephanie Crouse
4.0 out of 5 stars This one is better
Reviewed in Canada on August 8, 2019
Verified Purchase
This one seems to have better songs than the other one
Read more
One person found this helpful
Helpful
Sending feedback...
Thank you for your feedback.
Sorry, we failed to record your vote. Please try again
Report abuse
Load more international reviews

Jessica
5.0 out of 5 stars Perfect !
Reviewed in Canada on July 15, 2019
Verified Purchase
I'm so happy with my purchase, the vinyl & the album are just perfectly awesome !!
Read more
One person found this helpful
Helpful
Sending feedback...
Thank you for your feedback.
Sorry, we failed to record your vote. Please try again
Report abuse