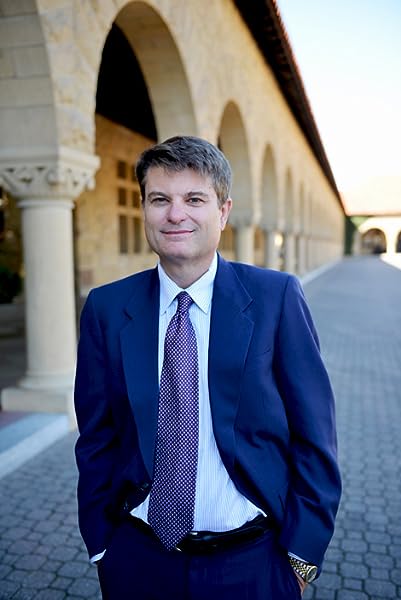 Rise of the Robots: Technology and the Threat of a Jobless Future Hardcover – May 5, 2015

“A careful and courageous examination of automation and its possible impact on society.”
—Kirkus Reviews

“In Rise of the Robots, Ford coolly and clearly considers what work is under threat from automation.”
—New Scientist

“Makes clear the need to come to grips with ever more rapidly advancing technology and its effects on how people make a living and how the economy functions.”
—Pittsburgh Tribune-Review

“Of all the moderns who have written on automation and rising joblessness, Martin Ford is the original. His Rise of the Robots: Technology and the Threat of a Jobless Future is due out this May.... Self-recommending.”
—Marginal Revolution

“Robots, and their like, are on the rise. Their impact will be an important question in the next decade and beyond. Martin Ford has been thinking in this area before most others, so this book deserves very careful consideration.”
—Lawrence Summers, President Emeritus and Charles W. Eliot University Professor, Harvard University

“Compelling and well-written… In his conception, the answer is a combination of short-term policies and longer-term initiatives, one of which is a radical idea that may gain some purchase among gloomier techno-profits: a guaranteed income for all citizens. If that stirs up controversy, that's the point. The book is both lucid and bold, and certainly a starting point for robust debate about the future of all workers in an age of advancing robotics and looming artificial intelligence systems.”
—ZDNet

“A thorough look at how far machines have come”
—Washington Post, Innovations blog

“Ford tells great stories, both about innovation in the last 50 years and about the potential impacts of widespread automation of work in the future…Rise of the Robots is a competent, approachable, and well-written synthesis of information across many area, and provides a valuable, coherent picture of automation's socio-economic interactions.”
—IEEE Technology and Society Magazine

“Ford offers ideas on changes in social policies, including guaranteed income, to keep our economy humming and prepare ourselves for a more automated future.”
—Booklist

Winner of the 2015 FT & McKinsey Business Book of the Year Award
A New York Times Bestseller
Top Business Book of 2015 at Forbes
One of NBCNews.com 12 Notable Science and Technology Books of 2015

“For nonfiction, I tip my hat to Martin Ford's Rise of the Robots, which is vacuuming up accolades and is recommended reading for IIF staff. Ford's analysis, in a somewhat crowded field of similar books, offers a sobering assessment of how technology (robotics, machine learning, AI, etc.) is reshaping labor markets, the composition of growth, and the distribution of income and wealth, and calls for enlightened political and policy leadership to address coming, accelerating disruptions and dislocations.”
—Bloomberg Business, Timothy Adams

““We are in an era of technological optimism but sociological pessimism. Martin Ford's Rise of the Robots captures why these shifts are related and what challenges this might pose to our conventional economic and social infrastructures.”
—Bloomberg Business, Andy Haldane

“[Ford's] a careful and thoughtful writer who relies on ample evidence, clear reasoning, and lucid economic analysis. In other words, it's entirely possible that he's right.”
—Daily Beast

“Rise of the Robots is an excellent book. Fair-minded, balanced, well-researched, and fully thought through.”
—Inside Higher Ed, Learn blog

“Surveying all the fields now being affected by automation, Ford makes a compelling case that this is an historic disruption—a fundamental shift from most tasks being performed by humans to one where most tasks are done by machines.”
—Fast Company

“Well written with interesting stories about both business and technology.”
—Wired/Dot Physics

“Whether you agree or not with the policy prescriptions put forward by [Martin Ford's Rise of the Robots and Anne-Marie Slaughter's Unfinished Business] these two well-written books, and quite a few will likely disagree, they are important reads for those wishing to better understand and influence the future.”
—Bloomberg Business, Mohamed El-Erian

“Few captured the mood as well as Martin Ford in The Rise of the Robots, the winner of the FT and McKinsey Business Book of the Year Award, which painted a bleak picture of the upheavals that would come as ever-greater numbers of even highly skilled workers were displaced by machines.”
—Financial Times

“Lucid, comprehensive and unafraid to grapple fairly with those who dispute Ford's basic thesis, Rise of the Robots is an indispensable contribution to a long-running argument.”
—Los Angeles Times

“Mr. Ford lucidly sets out myriad examples of how focused applications of versatile machines (coupled with human helpers where necessary) could displace or de-skill many jobs… His answer to a sharp decline in employment is a guaranteed basic income, a safety net that he suggests would both cushion the effect on the newly unemployable and encourage entrepreneurship among those creative enough to make a new way for themselves. This is a drastic prescription for the ills of modern industrialization—ills whose severity and very existence are hotly contested. Rise of the Robots provides a compelling case that they are real, even if its more dire predictions are harder to accept.”
—Wall Street Journal

“[Rise of the Robots is]about as scary as the title suggests. It's not science fiction, but rather a vision (almost) of economic Armageddon.”
—Frank Bruni, New York Times

“As Martin Ford documents in Rise of the Robots, the job-eating maw of technology now threatens even the nimblest and most expensively educated...the human consequences of robotization are already upon us, and skillfully chronicled here."
—New York Times Book Review


“Martin Ford has thrust himself into the center of the debate over AI, big data, and the future of the economy with a shrewd look at the forces shaping our lives and work. As an entrepreneur pioneering many of the trends he uncovers, he speaks with special credibility, insight, and verve. Business people, policy makers, and professionals of all sorts should read this book right away—before the 'bots steal their jobs. Ford gives us a roadmap to the future.”
—Kenneth Cukier, Data Editor for the Economist and co-author of Big Data: A Revolution That Will Transform How We Live, Work, and Think

“If the robots are coming for my job (too), then Martin Ford is the person I want on my side, not to fend them off but to construct a better world where we can all—humans and our machines—live more prosperously together. Rise of the Robots goes far beyond the usual fear-mongering punditry to suggest an action plan for a better future.”
—Cathy N. Davidson, Distinguished Professor and Director, The Futures Initiative, The Graduate Center, CUNY and author of Now You See It: How the Brain Science of Attention Will Transform the Way We Live, Work, and Learn

“It's not easy to accept, but it's true. Education and hard work will no longer guarantee success for huge numbers of people as technology advances. The time for denial is over. Now it's time to consider solutions and there are very few proposals on the table. Rise of the Robots presents one idea, the basic income model, with clarity and force. No one who cares about the future of human dignity can afford to skip this book.”
—Jaron Lanier, author of You Are Not a Gadget and Who Owns the Future?

“Ever since the Luddites, pessimists have believed that technology would destroy jobs. So far they have been wrong. Martin Ford shows with great clarity why today's automated technology will be much more destructive of jobs than previous technological innovation. This is a book that everyone concerned with the future of work must read.”
—Lord Robert Skidelsky, Emeritus Professor of Political Economy at the University of Warwick, co-author of How Much Is Enough?: Money and the Good Life and author of the three-volume biography of John Maynard Keynes

Martin Ford, the founder of a Silicon Valley–based software development firm, has over twenty-five years of experience in computer design and software development. The author of The Lights in the Tunnel: Automation, Accelerating Technology, and the Economy of the Future, he lives in Sunnyvale, California.
@MFordFuture

Page 1 of 1 Start overPage 1 of 1
This shopping feature will continue to load items when the Enter key is pressed. In order to navigate out of this carousel please use your heading shortcut key to navigate to the next or previous heading.
Back
Next
Pages with related products. See and discover other items: books on india, business forecasting, savings account, software training, House Robots