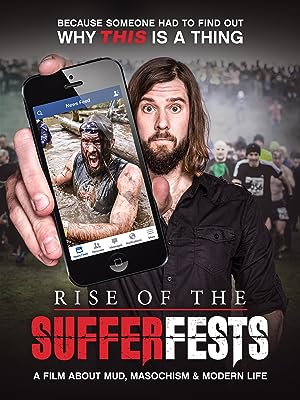 (159)
7.61 h 34 min201616+
Rise of the Sufferfests is the first documentary about Tough Mudder, Spartan Race and the global obstacle course phenomenon. The film asks why millions of people are suddenly paying to suffer through ice, fire, electricity, barbed wire, mud and more… and what it says about the world we’re living in.

The good news is that Scott Keneally made a pretty good meal for me; one that has left me suitably satisfied. Sufferfests, does a good job providing some of the context and backstory into OCR going back to its roots in England with Mr. Mouse and Toughest... a history that I'm sure not many are even aware of; so if you're the type of person who likes to understand how things came to be; this movie in part does a balanced job in giving you some of the history with only a passing mention into the drama that is associated with it and the upstarts that followed Toughest. Something else that Sufferfests did (unexpected to me, at least) was to chronicle self ascribed "beta male" Scott Keneally (I really hate that term, BTW Scott) and his first forays into OCR, and watching his attempts at Toughest, and other races, turn into acts of validation of himself, who he is, and who he thinks that he wants to be. That part of the story, I think spoke to me the most, not because Scott's and my lives are similar, but because I do these same things - I race on the sides of mountains carrying heavy things, climb insurmountable ropes, and put myself through agonizing pain. I do it, to understand who I am; a question that rides throughout the movie.

Is this the best film in the world? No. Was this a way for Scott to get to go to England a couple of times to do Toughest? Quite possibly (and I'm jealous that I didn't come up with the idea first :) ) Is this film niche to the OCR community, and something that only OCR people will "get" ? I don't think so, in that if you're doing an OCR race, or have done one, you'll "get" a lot of what is talked about here, but this is a perfect film to sit down and watch with those people in your life who don't *get it* or crook their head to the side as you tell them all about the things you did this past weekend with the mud and the fire, so that it can possibly help promote a discussion as to why we do the things we do to ourselves.

I would watch this again.

Trent E.Reviewed in the United States on January 4, 2017
3.0 out of 5 stars
Good for newcomers/outsiders who want to understand OCR, not super in depth for those already inside
Verified purchase
I'll admit, I was pretty stoked when I saw there was a documentary on the world of OCR (obstacle course racing) and I was excited to see it. I completed my Spartan Trifecta this year so OCR has come to be near and dear to my heart. Sadly, not much detail was given in the variety of OCR events nor in their various histories. The focus is on Tough Guy (the original obstacle course race), Spartan Race, and Tough Mudder. However, almost no mention is really made of Savage Race, BoneFrog, BattleFrog (now extinct), Warrior Dash, or any other obstacle race for that matter.

Principally, this is a documentary about Scott's journey into OCR and what it took for him to complete Tough Guy and a Spartan Race. I feel that for people who don't really understand OCR and what could drive someone to voluntarily run up and down a mountain while carrying sandbags, logs, jumping over mountains, climbing ropes, etc. this documentary does an excellent job of explaining the why. But, for those who already have this drive, it lacks most of the historical content on all different race types that I, personally was hoping for. It has its merits. Any story about overcoming obstacles to compete in OCR is inspiring. However, for a documentary, I felt its historical information was lacking.

Altogether a good summary/synopsis film for those interested in a more broad view of OCR.

ElliottReviewed in the United States on January 16, 2019
5.0 out of 5 stars
Great movie exploring not only the background of OCR but personal accomplishments
Verified purchase
Having just got into the OCR fever, it was interesting to see the history of OCR racing as well as the different mindsets that the creators/promoters have for each. As more and more races pop up seemingly every day, it's kind of nice to know where this phenom originated.

Whether you're an OCR racer or someone who just wants to know why it seems like so many have gone crazy for these races lately, this is the perfect documentary to get you up to speed on all things OCR!

I liked the personal story overlaid along with the history and mild comparison between the different races.

While I'm personally guilty of these, I'm stealing this from another reviewer: "I'm loving the dive into the complete narcissistic aspect of the whole thing -#humblebrags #doitforthelikes #generationme #wouldyoudoitifnoonewaswatching? AND the amazing human experience of doing things when scared, uncomfortable and totally crazy, but that make you feel incredible. "

El LibanoReviewed in the United States on January 10, 2017
5.0 out of 5 stars
A must watch for Newbies and OCR veterans
Verified purchase
Imagine trying to explain something that you are absolutely passionate about to complete strangers while at the same time attempting to overcome their initial thought that you and you're passion are insane. That's the initial premise of this truly wonderful documentary into the world of Obstacle Course Racing (OCR). As seen and told through the eyes of a self described "just enougher" and recent OCR addict, Keneally does a splendid job of describing how his OCR addiction began and follows him through a handful of challenges, both on the course and off. His back story lays the foundation for the journey this film takes and mirrors the journey of most first time OCR participants. This film does well introducing the uninitiated into the world of Spartan Race, Tough Mudder and Tough Guy the Original while providing enough nuance and detail to keep veteran racers entertained.
The story, cinematography, score and editing are beyond the level of first time documentarist. This film is a must watch.

DCTReviewed in the United States on May 7, 2017
5.0 out of 5 stars
OCR for REAL people
Verified purchase
I read a lot of the reviews and, c'mon people, breathe. If you're looking for a hardcore look at your race and want to send your mom a link to a video to show her how crazy you are, go to YouTube, grab the summary video of a Spartan race and send it to her. I've never done an OCR (first one coming up in Sept) and came across the video in a blog post Keneally wrote. I loved the documentary. It was well produced and gave me an inside look at what the race and the OCR culture is all about. It was a journey about one dude marginally committed to fitness who persevered and learned a lot about himself. I would guess his story is a lot of people's story, REAL people's story. I certainly hope it becomes mine. Watch it, enjoy it, don't over analyze it. It was a worthwhile 90 minutes.

L. LandonReviewed in the United States on January 11, 2017
5.0 out of 5 stars
This film speaks for the OCR tribe brilliantly!
Verified purchase
Whether you are a OCR racer or someone who has a loved one who seems to have gone crazy lately, this is the perfect documentary to get you up to speed on all things OCR! I fell in love with the sport last year and have 4 races planned for this year already. I was finding it hard to explain the passion and camaraderie to outsiders and family. This documentary really helps put into clear terms all of the various reasons that folks might get into this sport. I knew in my heart it was more than just vanity (although that is a component) -- there is a deeper psychological and scientific component and it was like having several ah-ha moments in a row watching this film. I found myself nodding like a GD bobble-head through the whole thing. Thanks to Scott for the years of effort (and pain in the research) to get this to completion!!

Rebecca L. DraperReviewed in the United States on November 6, 2016
4.0 out of 5 stars
Welcome to the Sufferfest!
Verified purchase
This is a great docutmentary about the life of OCR and what we pay to do. I just started running my own OCR races and have completed my trifecta this year.
The way that Scott brings to life the perspectives of both CEOs of the founding obstacle course racing is great. As someone who has done Spartan and not Tough Mudder (yet) this makes me just want to get out there and do more races! Go through the pain and just live life to the fullest. This docutmentary brings everything that we want to know to a forefront. Gives us the nitty gritty of it.
I recommend this to anyone living or thinking of going into the OCR lifestyle!
One person found this helpful

WardReviewed in the United States on September 26, 2016
4.0 out of 5 stars
Great film - worth a look
Verified purchase
Pretty good movie. Wish it would have focused more on obstacle races, obstacles, followed some individual elite competitors through races, more race footage, etc. I felt like it was more about the writer/director with obstacle course racing as a backdrop than actually being about OCR. That said, worth a look. A lot of focus on Tough Man, likely because they provided better access. Despite being the original and likely most grueling, would have been neat to see more modern obstacles.
One person found this helpful
See all reviews
Back to top
Get to Know Us
Make Money with Us
Amazon Payment Products
Let Us Help You
EnglishChoose a language for shopping. United StatesChoose a country/region for shopping.
© 1996-2022, Amazon.com, Inc. or its affiliates