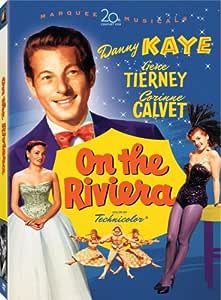 When a famous French aviator is unable to attend a social gathering, his business partners hire an entertainer who closely resembles him to take his place.
Genre: Musicals
Rating: NR
Release Date: 22-MAY-2007
Media Type: DVD

Just as Love Affair inspired An Affair to Remember and Sleepless in Seattle, Folies Bergère inspired That Night in Rio and On the Riviera. In Walter Lang's Technicolor version, Danny Kaye takes on a dual role previously assumed by Maurice Chevalier and Don Ameche. A master of mistaken identity, Kaye makes it his own. His Jack Martin is an American song and dance man based in Monte Carlo. When playboy aviator Henri Duran (Kaye with French accent) returns from his latest adventure, Martin notices a resemblance. He also notices Duran's neglected wife, Lili (Gene Tierney). After Duran is called away on business, Martin is enlisted to impersonate him for an important function. That gives him the chance to cozy up to Lili--and infuriate dance partner Colette (Corinne Calvet). Duran pays him back with an impersonation of his own. It isn't Twelfth Night, but On the Riviera is an enjoyable diversion. It also represents a family affair, since designer Oleg Cassini outfitted wife Tierney and Sylvia Fine penned tunes for husband Kaye (except for the standard "Ballin' the Jack"). Though considered a minor effort in the canons of Lang and Kaye--the musical was more of an audience favorite than a critical darling--Fox has done right by this long-unavailable title with an interactive press book, featurettes, lobby cards, and a pristine print (heavy on the brilliant blues). Look sharp for future Fosse hoofer (and wife) Gwen Verdon as a dancer and Tierney's famous Laura portrait above Duran's fireplace. --Kathleen C. Fennessy

4.3 out of 5 stars
4.3 out of 5
74 customer ratings
How does Amazon calculate star ratings?
Amazon calculates a product’s star ratings based on a machine learned model instead of a raw data average. The model takes into account factors including the age of a rating, whether the ratings are from verified purchasers, and factors that establish reviewer trustworthiness.
Top Reviews

Robert L. Anderson
5.0 out of 5 stars Wonderful Danny Kaye
Reviewed in the United States on September 2, 2019
Verified Purchase
This is one of Danny Kays best movies. I have often wanted to get it on DVD, but procratinated. Now that it has been put on Blu-ray I couldn't resist. The colors are beautiful. Gene Tierney is beautiful. Corrine Calvet is beautiful. The story of Danny Kaye doing a double role is very smart, but you must watch watch closely otherwise you'll get confused on who's who ! This comedy is a gem from The Golden Age of Hollywood that is no more.
Read more
2 people found this helpful
Helpful
Comment Report abuse

Patty
4.0 out of 5 stars Excellent performances!
Reviewed in the United States on December 18, 2019
Verified Purchase
I loved this movie! Gorgeous costumes and the scenery was beautiful. I gave it 4 stars because the storyline was not as interesting as it should have been. Still worth seeing though. Danny Kaye really went all out playing dual roles. Gene Tierney, as always looked fabulous and gave a great performance. But, performers can be only as good as the storyline. The writers should have put more effort into this.
Read more
One person found this helpful
Helpful
Comment Report abuse

OTMA
5.0 out of 5 stars On the Riviera 20th Centry Fox DVD
Reviewed in the United States on October 28, 2013
Verified Purchase
What more can be said about Danny Kaye? So many reviewers have stated that he is one the most underrated actors of all time. I had no idea that he was so underrated until I started looking for his films on DVD. WHAT'S THE DAEL? REALLY? They're either out of print or not available, I don't get it. I grew up watching his old films on TV and have a lot of them still on VHS, and decided it was time to start getting the DVDs. He's one of (if not thee) greatest talents in film history. I read an article this year that stated his daughter was excited about all of his films being released... where are they? "On The Riviera" is top-notch, some have said that it is uneven, I disagree, it's great all the way through. Gene Tierney is excellent and beautiful as she always is (look for her portrait from "Laura" hanging in the house) and the whole cast is strong and funny. Danny is absolutely suave in this double-role and his timing is as always perfect. This DVD has a clear picture and the sound is clean (I'm not a print quality maniac, but it looks very good to me.) The extras are really awesome and worth watching, pick this DVD up before they discontinue it as well!
Read more
6 people found this helpful
Helpful
Comment Report abuse

Chris Derochie
4.0 out of 5 stars Great but not the best Danny Kaye movie ever
Reviewed in the United States on April 7, 2016
Verified Purchase
There's nothing quite like seeing a great old Danny Kaye movie restored on Blu-ray! If this had been the first Danny Kaye movie I had seen, I'd probably be giving it 5 stars but it isn't as entertaining or appealing as some of his stellar hits, like The Court Jester, Merry Andrew, The Inspector General or Hans Christian Andersen. It's a much tamer story, more like the role he played in The Five Pennies but more predictable and formulaic. It's still very appealing but it doesn't reach the stellar heights that many of his other movies reach. I am proud to have it in my collection, though.
Read more
2 people found this helpful
Helpful
Comment Report abuse

Randy E. Halford
4.0 out of 5 stars A subtle comic turn from Danny Kaye
Reviewed in the United States on November 12, 2011
Verified Purchase
1951's "On The Riviera" is a classy affair for the talented Danny Kaye, albeit, a slightly more somber one. Filmed twice before (with Maurice Chevalier and Don Ameche in the lead), Kaye does a fine job as a nightclub entertainer who bares a strong resemblance to a dashing French aviator (also Kaye, of course), and is eventually tapped to impersonate him for an important function. This gives the entertainer the chance to get to know the cavalier aviator's rather neglected wife (Gene Tierney).
As usual, there are some pleasing musical moments from Kaye (his wife Sylvia Fine composed once again). However, being more sophisticated & subtle, Kaye has to play it semi-serious, so this one might not appeal to all viewers, although it's still an extremely pleasant film.
The DVD transfer preserves the movie's splashy scenery, filled with plenty of lush "eye candy" Riviera shots. But seeing how this film's been out of circulation for a long time, it's worth adding to your Kaye collection!

Geri Bethel
5.0 out of 5 stars Great movie. Danny Kaye is fantastic and it shows his versatility.
Reviewed in the United States on November 18, 2019
Verified Purchase
Great movie and came promptly. Danny Kaye is funny playing two different people. That makes for a mix up with the women.
Read more
One person found this helpful
Helpful
Comment Report abuse

RO
5.0 out of 5 stars Great move!
Reviewed in the United States on March 15, 2019
Verified Purchase
I really enjoyed this movie and I especially enjoyed the extra added information that talked about the previous versions of the movie - very interesting.
Read more
One person found this helpful
Helpful
Comment Report abuse

JANA GAYLE
5.0 out of 5 stars A must see great movie from the golden days of Hollywood!
Reviewed in the United States on April 3, 2019
Verified Purchase
What a classy movie! Just great entertainment! Who doesn't love Danny Kaye if old enough to remember him? Good, clean, fun movie!
Read more
One person found this helpful
Helpful
Comment Report abuse
See all reviews from the United States

P. Cook
5.0 out of 5 stars Riviera Blu-ray is region free
Reviewed in the United Kingdom on January 17, 2014
Verified Purchase
Greatly enjoyed Danny Kaye's performance in the film "Riviera" as he wasn't over the top. The picture and audio quality was good although I can't compare it to the dvd version as I have never seen it in that format. The extras were very good. The icing on the cake was that this US import is region free.
Read more
2 people found this helpful
Helpful
Sending feedback...
Thank you for your feedback.
Sorry, we failed to record your vote. Please try again
Report abuse

preciousjewel
5.0 out of 5 stars Riviera
Reviewed in the United Kingdom on June 29, 2011
Verified Purchase
Always a joy to watch Danny Kaye at his finest. A brilliant comic entertainer. Would deal with this supplier again arrived good condition.
Read more
3 people found this helpful
Helpful
Sending feedback...
Thank you for your feedback.
Sorry, we failed to record your vote. Please try again
Report abuse

It is dated, and may not win any awards, but it's a feel good farce from the past.

I really enjoyed it.

And by the way, Danny Kaye was truly a talented actor whose star has been allowed to wane. Watch this and you will see just good an enterainer he was.

michandon
5.0 out of 5 stars ON the riviera
Reviewed in France on November 18, 2015
Verified Purchase
DVD en Good condition. Invoice in total security. Invoice from USA to France. Description of the item very similar to the comments on the web site store. Very satisfied. Olivier
Read more
Helpful
Sending feedback...
Thank you for your feedback.
Sorry, we failed to record your vote. Please try again
Report abuse

Page 1 of 1 Start overPage 1 of 1
This shopping feature will continue to load items when the Enter key is pressed. In order to navigate out of this carousel please use your heading shortcut key to navigate to the next or previous heading.
Back
Next
Pages with related products. See and discover other items: broadway musical movies, broadway musicals on dvd, gene tierney