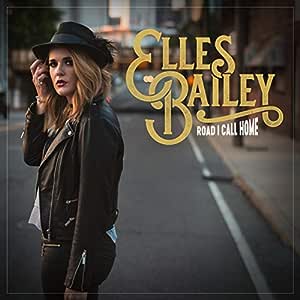 "Wildfire was written over five years," says Elles, "Road I Call Home was written over one. It tells the story of touring Wildfire, and how much my life has changed since. I feel it delves deeper, and deals with loss, love, anger, determination and life on the road, with more than 200 gigs under my belt and many miles travelled." Live performance is Elles' natural habitat and home from home, touring the last album well beyond her native UK into Europe and America, playing dates with Jo Harman, Eric Gales and headlining her own tours. She's also risen up festival listings at events like Black Deer, Swing Westplaar and The Great British R&B Festival. Like its chart-topping predecessor, Elles' new album features co-writing contributions from high-calibre collaborators, including British hit-making legend and Ivor Novello Award winner Roger Cook, storied Memphis and Nashville giant Bobby Wood, as well as Dan Auerbach (of Akron, Ohio powerhouses The Black Keys) on the infectious Little Piece of Heaven. Inevitably, Elles Bailey will be back on the road in 2019, preceded by the powerful new single Medicine Man as an enticing taster of next year's amazing new album.