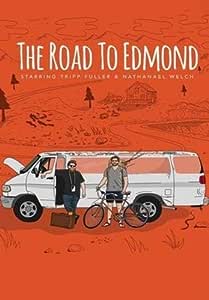 The Road to Edmond

Imagine a youth pastor (aka Cleo) whose love for a teenage girl puts his job at the church in jeopardy. No - not an under-age, pervy sorta love. We're talking about a level of care and acceptance that most churches aren't too fond of. (Now you're wondering what her deal is, aren't you?) The Elder Board puts Cleo in a two-week Jesus timeout, so he packs a bag, hits the road on his bike, and runs into a hairy guy named Larry traveling with his dead Dad. (Actually, Larry runs into Cleo, but we'll leave that for the film.) All kinds of craziness ensues causing Cleo to question faith, sexuality, and Jesus...including how far is too far. It's weird, and you'll love it...we promise.

3.9 out of 5 stars
3.9 out of 5
75 customer ratings
How does Amazon calculate star ratings?
Amazon calculates a product’s star ratings based on a machine learned model instead of a raw data average. The model takes into account factors including the age of a rating, whether the ratings are from verified purchasers, and factors that establish reviewer trustworthiness.
Top Reviews

Jefferis Peterson
1.0 out of 5 stars Compassion without Holiness is Lawlessness
Reviewed in the United States on February 1, 2020
Verified Purchase
The Good: It is a well-done movie with an interesting storyline about legalism and rejection by church people. The acting is mostly good. There a few funny parts. And it shows the destructive character of law without grace and compassion for those in sin.
The Bad: The movie makes the same mistake that mainline churches do in their attempt to love without conditions while ignoring what the Bible actually teaches about holiness. In that sense, they pretend to be "more compassionate" than God. Indeed, the main character proves this point by ripping out a page of the bible he doesn’t like and rolling a joint with it. Of course, this has to do with scriptures towards homosexuality. The main character performs a lesbian wedding in a church and has a good sermon about love, but rejects what the Scriptures says is sin.
Now there is no question that we are to love everyone, but we are not supposed to endorse everything. Sin, according to the scriptures, is to miss God's mark: his intended plan and purpose for your life. It is wrong because it hurts you. Jesus said, "God made them male and female; what God has joined together, let no one break apart."
His intent for man and woman is marriage. In their difference, the man and woman represent the image of God as partners in communion. Anything other than that is a distortion of God's image in humanity and of his intended purpose for creation.
To be a Christian means to be a disciple of Jesus, and to be a disciple of Jesus means you have to follow his teachings, not set up your own rules like Adam did in the Garden of Eden.
My point is this: the movie pretends to be a breaking-of-the-bounds redefinition of God's love as all accepting of all behaviors, but in truth, it endorses lawlessness in the place of the grace that leads to holiness. Contemporary culture aside, the Bible is either the ultimate guide for "matters of faith and practice," or it is no guide at all. Rewriting the scriptures to suit one's own opinion or desires is just another instance of man trying to replace God because he, the man, thinks he knows better than the Creator.

K. Foster
5.0 out of 5 stars Yay! Christian film with the right stuff!
Reviewed in the United States on January 18, 2020
Verified Purchase
This film is different and refreshingly so. On the market today, there are too many sappy, one sided, closed minded Christian videos. This one is NOT like that. The message God is sending humanity is one of love. Jesus came to show us how to love. There are "brands" of Christians that won't like this at all due to their literal, non-science views. I liked this movie. It kept my interest, was funny and warm. Has lots of parts not for kids though, language, sexual content, alcohol and smoke, but all those things considered it was very realistic if unconventional. For a change.
Read more
18 people found this helpful
Helpful
Comment Report abuse

Jill Griffith
5.0 out of 5 stars Go on a road trip and enjoy 2 hours with these guys you’ll wish were your friends
Reviewed in the United States on January 19, 2020
Verified Purchase
A heartfelt funny movie. It’s a fun way to come along with these guys and the characters they meet along the way. You start off with a premise but it turns into a lot more. The movie pushes you to think, definitely will get you laughing and allows you to explore your feelings and thoughts about topics like sexuality. It’s got some typical movie humor but goes deeper.
Read more
12 people found this helpful
Helpful
Comment Report abuse

Jennifer Lynch
5.0 out of 5 stars Worth the watch if you like to think.
Reviewed in the United States on January 19, 2020
Verified Purchase
Tripp Fuller said to leave a five star review and he would pay for me to rent the film. I'm considering buying it now. I can't say I totally agree (or totally disagree) with the opinions this film seems to promote, but I definitely think they are worth seriously considering, especially as a Christian.
The acting was okay, the plot was pretty good for the genre, the dialogue was excellent. I allowed myself to be involved in the narrative enough to care for the characters.
Read more
8 people found this helpful
Helpful
Comment Report abuse

M and L
5.0 out of 5 stars A movie for reflective people of faith, and people in want of an embrace
Reviewed in the United States on February 4, 2020
Verified Purchase
The Road to Edmond uses a journey through the wilderness in a youth pastor to explore Christian culture's current journey through the wilderness of how to deal with matters of difference - principally in relation to sexual orientation, though there are motifs that apply to any minority group who has ever been "otherized" by dominant culture. The pivotal moment, in my mind, was an exposition of three Jesus' parables that all end in the celebration when the lost element had been found and included. Positing that those who have been marginalized by dominant culture are represented by a lost sheep in Jesus' parable, the movie asks - can the other 99 sheep celebrate when the 1 who is different is included? Some reviews indicate that people who experience themselves as included in the dominant culture may not be able to celebrate at the inclusion of the marginalized, while others celebrate this inclusion. This is a low-budget film that packs an out-sized punch. Kudos to all involved in its production.
Read more
7 people found this helpful
Helpful
Comment Report abuse

Parker
1.0 out of 5 stars Sucked Majorly
Reviewed in the United States on January 12, 2020
Verified Purchase
Terrible acting, horrible plot and a waste of the rental fee. I'd like my money back.
Read more
10 people found this helpful
Helpful
Comment Report abuse

Sarah Maria Martin
5.0 out of 5 stars A reflection on how to show Christian love
Reviewed in the United States on January 18, 2020
Verified Purchase
A sweet story of a couple guys just trying to live life well, and live out an honest Christian faith outside the mold of conservative North American evangelical culture.
Read more
9 people found this helpful
Helpful
Comment Report abuse
See all reviews from the United States