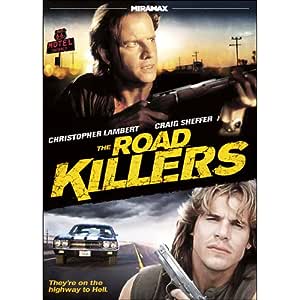 While on a road trip, Jack (Christopher Lambert) and his family are horrified when a young boy (Joseph Gordon-Levitt) is nearly run down by a carload of troublemakers. The group's ringleader, Cliff (Craig Sheffer), challenges the boy's father to a deadly game of chicken with deadly consequences. Intent on eliminating witnesses, Cliff orders his cronies to kill Jack while he kidnaps the family, but the gang's plans begin to crumble as they fight among themselves...revealing volatile tempers and shocking secrets.

D. Bortnik
1.0 out of 5 stars Horrible movie, horrible scripts, or horrible acting? I can't decide...
Reviewed in the United States on July 18, 2005
Verified Purchase
Honestly, I really can't decide if it was one or the other, or simply all of the above. It was bad! I like Craig Sheffer as an actor, which is the reason I wanted to see this film, but it was a disappointment! Pretty weird.....especially the part where the evil brother stopped his brother Cliff from killing the father of the family they've been trying to hunt down that whole time!! The reason for this was..."you're lucky I like you!?!?!?" OK, they've been chasing this dude down like madmen from hell, now one of them stops his brother from killing him because he likes him? Then they ride off with his daughter, while the father tries to chase them down in a car, and they try to shoot at him on the road. If I were Craig Sheffer and Christopher Lambert, I wouldn't use this one on my resume.
Read more
One person found this helpful
Helpful
Comment Report abuse

Diamond Padilla
5.0 out of 5 stars This movie was simply the greatest
Reviewed in the United States on November 20, 2012
Verified Purchase
Loved this movie so much very sad and very disburbing but very good would highly recommend this movie to anyone who likes drama and lots of violence just loved it
Read more
Helpful
Comment Report abuse

peter
5.0 out of 5 stars a great movie..
Reviewed in the United States on February 12, 2014
Verified Purchase
this movie keeps you on your toes and guessing....it has a great cast and lots of action....well worth it..a must see movie
Read more
Helpful
Comment Report abuse

V. tomasiewicz
5.0 out of 5 stars road killers
Reviewed in the United States on January 10, 2013
Verified Purchase
i did like this older echo bridge movie, it was very strange but in a good way, it arrived on time
Read more
Helpful
Comment Report abuse

Sparky Lightbulb
1.0 out of 5 stars Painful to Watch
Reviewed in the United States on December 29, 2009
Verified Purchase
Writer Tedi Sarafian and director/brother Deran were awake in lit class, for their film "The Road Killers" filches from two classic American stories: "Where Are You Going, Where Have You Been?" by Joyce Carol Oates and "A Good Man Is Hard to Find" by Flannery O'Connor. The Sarafians, though, do not have the skill to interweave the horror of those two works into an effective whole.

In the opening scene, we meet 16-year-old Ashley (Alexondra Lee), a sullen, disrespectful teenager. When her family's car overheats on a desolate highway, Ashley stretches her legs--with nothing between the bottom of her bare ass and the cowboy boots on her feet but a few threads dangling from her cutoff shorts. Her style and demeanor indicate that she is learning to own her sexual power, making her a perfect clone of Connie from Oates's story. And like Connie, Ashley attracts her own psychopathic admirer when, at a roadside diner, she escapes to the bathroom and discovers Cliff (Craig Sheffer) peeing at the urinal. After a brief flirtation while Ashley applies lipstick, Cliff says, "If I did what I feel like doing, you'd slap my face and run out of here screaming," reminiscent--though wordier and less effective--of the threat Connie gets from Arnold Friend: "Gonna get you, baby."

Unlike Connie who deals with Arnold Friend alone, Ashley has her family along as they are traveling by car caravan to San Diego. So now the Sarafians fold in elements from "A Good Man Is Hard to Find," which chronicles a family road trip gone horribly wrong. In the O'Connor story, the grandmother inadvertently causes her family to cross paths with the Misfit, a dangerous escaped convict who murders them all. The grandmother's bad choices--like hiding the cat in the car (which causes the accident when the animal escapes its basket) and directing her son Bailey down a desolate dirt road when she's not sure it's the right one--are plausible, for O'Connor has established that the grandmother insists on getting things her own way. The characters in "The Road Killers" also make a number of poor decisions which put the family in danger, but their behavior is never believable.

For example, while the adults deal with the overheating car, Ashley's young cousin Rich (Joseph Gordon-Levitt) finds a flower growing in a crack on the highway. He bends down to study it, asking with Buddhist concern if he should pick it or leave it for a future vehicle to flatten. A few minutes before, Rich was playing a video game, competing to beat his father's winning score. Boys who play video games grind flowers underfoot; they don't suffer absurd angst over a daisy's potential demise. During Rich's communion with the flower, Cliff and his carful of crazies come tearing down the highway. Maybe the crickets were really loud. Maybe the wind masked the sound of an abused 8-cylinder engine. For some reason, no one hears the Cadillac until it nearly runs down Rich while he is pondering the flower's fate (the flower escapes unharmed).

The near-miss understandably angers the adults on the trip, so when they recognize the Cadillac at the diner, they confront Cliff about his irresponsible driving. When Cliff points out that the boy is, despite the scare, fine, father Glen (Christopher McDonald) throws a glass of water in Cliff's face. Do men throw water in each other's faces? Isn't that something wives do when they learn their husbands are cheating? This girly challenge inspires a game of chicken between Cliff and Glen. Granted, the middle-aged father is driving a red, mid-life-crisis Mustang, but would a character of his age and responsibility believably agree to pilot his car head on into another? When Glen does--but then loses his nerve, crashes the Mustang, and dies in the burning wreck--we have little sympathy.

Instead of returning to the diner where they could contact the police, the stunned family continues down the road where Cliff waits in ambush. Glen's brother Jack (Christopher Lambert) leaves the protection of his vehicle, threatens Cliff with jail, and then stupidly turns his back on three young men with a baseball bat. When Cliff swings that bat with home-run intensity at Jack's head, dropping him on the asphalt, we gasp at the inanity of the situation, not in horror. The movie may have gotten interesting if, with the men out of the picture, the Sarafians had step-mother Helen (Michelle Forbes) tap into female rage to save the day, but instead, they let he-man Jack (Tarzan and the Highlander in other Lambert incarnations) make an improbable recovery from the skull cracking--only to get arrested. Now logically, a man would approach a motel desk and say, "My family has been kidnapped. May I use your phone to call the police?" The blood-stained shirt would lend credibility to his emergency. Instead, Jack assaults the clerk and breaks a window, ending up in jail.

At this point, we are ready to abandon the good guys and root for Cliff, for a well-drawn charismatic bad boy is a delight to watch because he shows us an alternative method for engaging the world. Think surfer/bank robber Bodhi from "Point Break" or Robin-Hood Omar from "The Wire." Unfortunately, Cliff just kills (when he's not twirling his glam-rock hair and sucking on the ends like a tweener). He murders strangers, friends, his brother, and police, all with equal lack of motivation or a single reasonable explanation for what has set him off.

The actors manage to depict rage, fear, worry, craziness--a whole spectrum of emotion--with competence, but the ridiculous action makes this movie painful to watch until the end. Better to dig out the college lit anthology and read the short stories by Oates and O'Connor, who handle all these same elements with real expertise.

Gary James Taylor
3.0 out of 5 stars The highway to hell
Reviewed in the United Kingdom on March 30, 2014
Verified Purchase
The Road Killers 1993 (aka Roadflower)
MIRAMAX Region 1, US Import

While on a road trip, Jack Lerrolland (Christopher Lambert) and his family are horrified when a young boy is nearly run down by a car load of troublemakers including the groups ringleader Cliff (Craig Sheffer).

The film itself is not bad but is let down by the dvd, the picture quality could be better but is ok the audio is fine. What is noticeable is the movie should be in widescreen and because it is fullscreen the two actor`s on the screen get the side of there heads out of shot. Apart from that if you are a fan of Lambert or Sheffer it`s not a great film but it is ok

Mr. R. Domar
3.0 out of 5 stars Nutters On The Highway
Reviewed in the United Kingdom on August 11, 2011
Verified Purchase
Plot. A family on a road trip fall foul of a carload of scum bags. A man dies when his car crashes in a game of chicken. Another man is left for dead and his wife, daughter and young son are taken prisoner by the gang.
This is a passable thriller set in the desert. We see lots of in fighting among the gang led by Craig Sheffer. Christopher Lambert is the man looking for his family. There are several twists in the story and some unexpected turn ups along the way. It's ok for what it was but nothing too memorable. Film was made in 1994 and many of the actors here went on to better things.
Extras nil. USA Release Region 1. English subtitles.
Read more
One person found this helpful
Report abuse