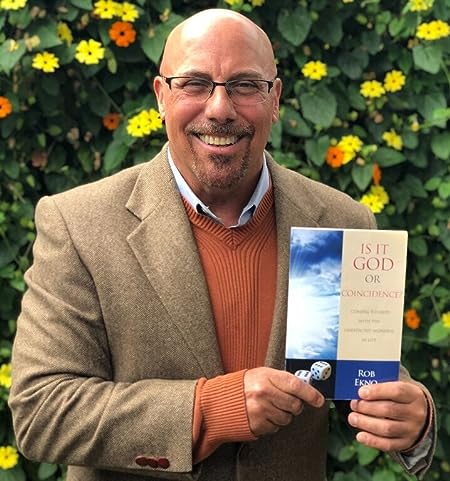 “Every challenge holds a blessing. My job is to find it.” —Rob Ekno

Rob Ekno’s award-winning broadcasting career came to a crashing halt at the affects of drugs and alcohol, and he became homeless and hopeless. Fortunately, Rob was able to fight off his demons long enough to begin his journey of sobriety on November 29, 1992.

Not long after, Rob moved from the East Coast to Los Angeles. There his career was reignited when he became a national TV host—a career that lasted nearly 15 years. He also spent four seasons on the NBC sitcom Newsradio, and had a role on Phil Hartman’s last show.

Rob’s attempt to rekindle his dwindling relationship with God took an abrupt turn backwards after a brief, yet scary, encounter—an incident that led Rob to walk away from God for nearly a decade. However, following a miraculous meeting with his future wife, Rob began to experience a continual stream of “coincidental” circumstances, which ultimately led him to acknowledge that a “Master Architect” surely was at work in all these improbable synchronicities.

Again refocused on God, Rob produced and hosted the spiritually based internet radio show In Your Face, heard weekdays for more than three years in nearly 100 countries. Rob also wrote his first book God, Bless America…Before It’s Too Late. His testimony aired on The 700 Club, Hour of Power, and a host of other media outlets. Rob’s incredible passion when sharing his life’s stories has been enjoyed by audiences at live events for nearly three decades.

After his marriage ended, Rob headed to Alaska to begin the next chapter in his life. He spent much of the next five years there and had incredible experiences while exploring ice caves, mushing with sled dogs, flying in helicopters and float planes, ziplining, and whale watching.

Rob quickly gained vast knowledge of Alaska’s ecosystem. In 2017, he put that wisdom to use as the cruise host on a private ship traveling throughout southeast Alaska, as well as the Columbia and Snake Rivers in Washington and Oregon. Rob created presentations giving guests an insider’s look at the area’s wildlife and places of interest.

In October of 2018, Rob survived a devastating fall into an unsecured open hatch on the cruise ship. His left leg was severely injured. Receiving no medical help, Rob spent two hours lying with a towel and a belt wrapped around his leg. The impact from the fall also induced several other injuries, including Rob’s arms, shoulders, and neck. As of this writing, nearly two years later, after multiple surgeries, visits to specialists, physical therapists and more, Rob continues to receive treatment, and heal from his injuries. 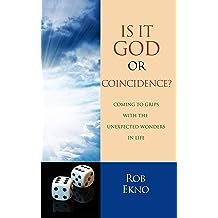 Is It God or Coincidence?: Coming to Grips with the Unexpected Wonders in Life Aug 5, 2020
by Rob Ekno
( 43 )
$4.99
At what point does one consider the seemingly chance occurrences of life mere “coincidences” versus so-called “God shots?” You know, those events in life that—by virtue of their timing, clarity, or incredible odds—bring about improbable or unimaginable outcomes? In the search for meaning, each of us ultimately must find our own answers. In the pages of this book, however, you may find some welcome inspiration, encouragement, and hope for the journey. “WARNING: The contents of this book are powerful, insightful, inspiring, and transformational. Reading it with an open heart and mind will improve your life in all areas.” Lee Papier – The MEGA Coach.Author Rob Ekno turned from a life of battling his demons to becoming remarkably attuned to the Spirit of the Universe. From the abyss of despair to the mountaintop of joy and bliss, a flow of timely and consistent happenings illuminated the pages of Ekno’s life like falling drops of light, and held him spellbound. So, too, is the reaction of people hearing his stories of these events—for in their telling, our eyes are opened a little wider to the ineffable grace all around us.Ekno has a unique gift for seeing a different dimension and the subtle ways in which God’s Spirit presents itself in life. After experiencing such extraordinary and mind-boggling events, Ekno simply and clearly retells these stories and enthusiastically seeks others with which to share them as he’s done in this book. By so doing, many have sensed the sure and certain energy that emerges from Ekno’s tales—over and above the incredible passion he has in telling them.In this book, Ekno relates tales that chronicle and exemplify an amazing amount of collective “evidence” he’s witnessed throughout the past eight years. For many, these experiences have helped to transform unbelief and uncertainty into openness and hope—and even the very notion of “coincidence” into inspired “acts of God.” The author hopes that these stories will, at the very least, spur readers to think more about their own lives and narratives. These accounts might serve as a spark, they may “wow” you, touch your heart, or bring a tear to your eye, as you draw nearer to your own Higher Power.Rob Ekno’s book Is It God or Coincidence? Coming to Grips with the Unexpected Wonders in Life, has already led many family members, friends, and strangers alike to recount the “miraculous” happenings in their own lives—some so intensely that their eyes filled with tears. So, dear reader, perhaps there are supernatural events in your life that need to be resolved as either coincidences or evidence of the hand of God upon you. The stories that Ekno relates in this book may help to move you further along the path to answering that question for yourself. May your journey be blessed….
Read more
Other Formats: Audible Audiobook , Paperback