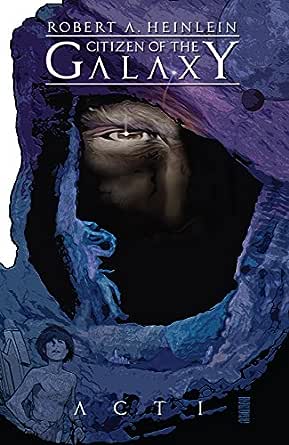 You've subscribed to Robert Heinlein's Citizen of the Galaxy! We will preorder your items within 24 hours of when they become available. When new books are released, we'll charge your default payment method for the lowest price available during the pre-order period.
Update your device or payment method, cancel individual pre-orders or your subscription at
Your Memberships & Subscriptions 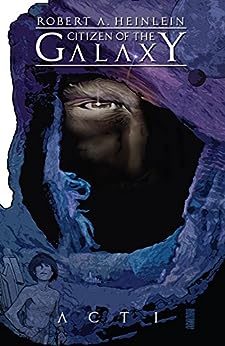 Robert Heinlein's Citizen of the Galaxy #1 (of 3) Kindle & comiXology 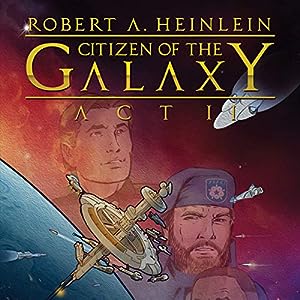 R. Christenson / Lunamation
5.0 out of 5 stars Science Fiction at it's best.
Reviewed in the United States on March 19, 2015
Verified Purchase
This is the first of a three issue mini-series adapting Robert A. Heinlein's classic science fiction novel Citizen of The Galaxy, widely considered one of his best young adult novels.
SPOILERS
This issue covers the childhood of slave boy Thorby, starting with his arrival on a planet far across the galaxy from Earth. Baslim the crippled beggar buys Thorby in a slave auction, provides him food, shelter, and a superior education, and ultimately freedom. But Baslim inadvertently involves the boy in his own interstellar intrigue, in which the beggar is arrested, leaving Thorby in the hands of a space captain . . . to be continued . . . and I can't wait for the next issue, even though I've read the novel before.
If your only exposure to Heinlein is from the film Starship Troopers, don't expect to find as much violence here, though you won't be disappointed in any other respects; the story is very engaging. More than anything in Starship Troopers, Thorby's character reminds me of young Anakin Skywalker as a slave on Tatooine in The Phantom Menace. Likewise if your only exposure to Heinlein is his best-selling Stranger In A Strange Land or later adult novels like Friday, this is not an "adult" graphic novel, but an excellent one.
As far as I can tell, having read the book over a year ago, it's a faithful enough adaptation. The art is good, the writing good, the story clear. The images depict the Sargon space port very much as I had pictured it when reading the book. The "flavor" is just right.

Rickgil55
5.0 out of 5 stars The best!
Reviewed in the United States on December 7, 2017
Verified Purchase
It's Heinlein! If you don't know what that means, you're in for a treat. He's not called the Dean of s.f. For nothing, and this is one of his best.
Read more
One person found this helpful
Helpful
Comment Report abuse

Starchild
5.0 out of 5 stars It's a comic book
Reviewed in the United States on January 28, 2017
Verified Purchase
Amazon/Kindle should in all fairness put this in the description of the book. I've never cared for comics so I have nothing to compare it to.
Read more
Helpful
Comment Report abuse

jpo
5.0 out of 5 stars Faithful adaptation of a Heinlein classic.
Reviewed in the United States on January 7, 2016
Verified Purchase
This graphic novel is a faithful adaption of Heinlein's Classic. Great! A bargain at the price! Cannot wait to read the rest of the series.
Read more
One person found this helpful
Helpful
Comment Report abuse

William
3.0 out of 5 stars Three Stars
Reviewed in the United States on July 21, 2017
Verified Purchase
Didn't realize it was a graphic novel ; hard to read on Kindle
Read more
Helpful
Comment Report abuse

Kindle Customer
1.0 out of 5 stars One Star
Reviewed in the United States on July 12, 2017
Verified Purchase
You should stop doing this he might come back to haunt you.
Read more
Helpful
Comment Report abuse
See all reviews from the United States

Dr B
1.0 out of 5 stars One Star
Reviewed in the United Kingdom on September 19, 2017
Verified Purchase
Ok
Read more
Helpful
Sending feedback...
Thank you for your feedback.
Sorry, we failed to record your vote. Please try again
Report abuse