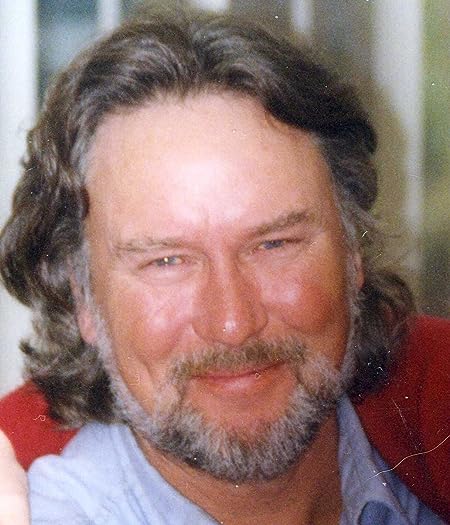 Writing for the last 15 years after adventures as a leading Chiropractor in my field and retiring to travel. Spent time developing the family farm into subdivision along with horse training. Along the journey I found the love of my life Grace. You will get to know her as you read. The saga continues as life unfolds. Join us, the best is yet to come. 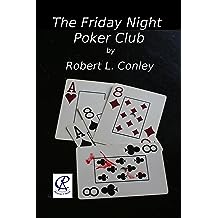 The Friday Night Poker Club (Bob Stewart Series) Jun 15, 2015
by Robert L. Conley
( 1 )
$3.99
Four average guys, doing average things with their lives have their worlds turned upside down because of a video file that they shouldn't have taken. Conley takes these four on the ride of their lives getting shot at and laughing most of the time. One little twist to it all is that Jessica loved Bob just before she dies at the hands of murderers. Jessica decides to stick it out in the world in between and help Bob take care of business.
Read more
Other Formats: Paperback 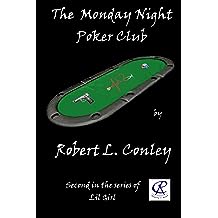 The Monday Night Poker Club (Lil Girl Series Book 2) Aug 16, 2016
by Robert L. Conley
$3.99
Lil Girl hates Oliver. Detective Jane Oliver hates Lil Girl. She thinks Lil Girl killed three men and should be in jail. Lil Girl knows Oliver is a dumb bitch and continually tells her but they end up having to work together. They both have something special to bring to the homicide table.
Conley did it again with another action packed thriller from the start. Downtown Duluth should be in shambles except...
Read more
Other Formats: Paperback 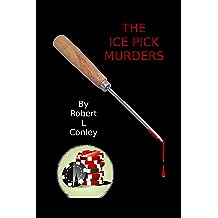 The Ice Pick Murders (Lil Girl Series Book 1) Jun 14, 2015
by Robert L. Conley
( 1 )
$3.99
Left for dead, motivation is what keeps Lil Girl going. First strung out because of a loss of dreams and now a loss of control she fights back the only way she knows how. Her poker face, nerves of steel and the motivation to thrive instead of survive creates an action adventure novel that moves fast. Conley has that knack to get to the meat of a situation and make a reader turn that page to see what's going to happen next. He also throws a twist to this one. He might even want to know who "The Ice Pick Murders" were perpetrated by.
Read more
Other Formats: Paperback 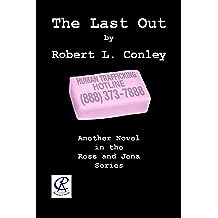 The Last Out (Ross and Jena Series Book 4) Oct 30, 2016
by Robert L. Conley
$3.99
I think the time has come for all of us to take part in the effort against human trafficking and drugs. Two of the most devastating scourges on our society. The number on the front of this book is real and all you have to do when you see this blight occurring is make a phone call to it or 911. As someone said once. "It's when good men do nothing...etc."
Of course this is a novel but nothing is impossible. We have to change things now and make it right again. We can do it and I'm hoping that the pen is mightier than the sword. I'm going to keep writing about the ugliness of it all, hoping and praying I make a difference. 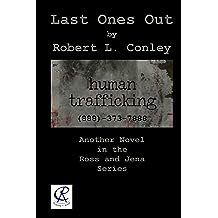 Last Ones Out (Ross and Jena Series Book 3) Oct 29, 2016
by Robert L. Conley
$3.99
This novel is about a topic that is so ugly that I had a tough time wrapping my head around it. It's tough for a person like me or anyone that has a rational mind to even think that one human could do this to another. It's pathetic and sick in a most unnatural way.
We must stop this scourge on our souls, our country, our lives. How to do this is simple. We care. Care enough to build shelters that are for our young. Provide them with a way home or jobs that make a living. A trade, schooling, or whatever it takes to get them off the streets and out of the hands of no account bastards that make their living off our children. 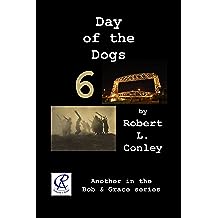 Day of the Dogs 6 (Bob and Grace Series) Oct 16, 2016
by Robert L. Conley
$3.99
Bob and Grace have found their home in Duluth Minnesota. Just on the outskirts with privacy. Grace needs to see her daughter, Lily, again and goes off leaving Bob to his own devises. Of course it's impossible for Bob to stay out of the limelight even in their own witness protection program.
Read more
Other Formats: Paperback 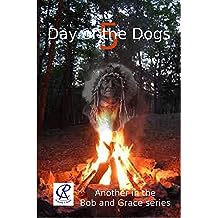 Day of the Dogs 5 (Bob and Grace Series) Oct 14, 2016
by Robert Conley
$3.99
Conley takes us on another Bob and Grace adventure. His children are dead along with his best friends. There's nothing much to hang around for at the old farm especially since someone is trying to kill them. They decide to take off in their own witness protection program but there is a problem. No matter where they go, when someone finds out about Bob, the rumors fly. They have to keep going so their friends don't get hurt. They find that the Northwest and Canada gives them a fighting chance against all odds.
Read more
Other Formats: Paperback 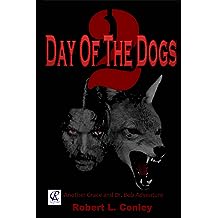 Day of the Dogs 2 (Bob and Grace Series) Oct 13, 2016
by Robert Conley
$3.99
The threats aren’t over. Damion got away and the FBI needs Dr. Bob to track him down. It takes offering a million for him to reluctantly take the job at the disapproval of Mike especially because he’s taking Grace instead of him and for good reasons.
The Old Indian appears again and again with his cryptic tidbits which infuriate Grace. “Just come out and say what the hell you mean” then again she’d just drop an atomic bomb over the area and kill the SOB and have it done and over with instead of getting all shot up.
No matter how hard he tries Dr. Bob can’t get rid of the damn dogs only this time he wishes he had Three Toes on his side. It might even the odds.
Read more
Other Formats: Paperback 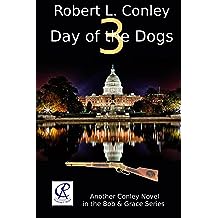 Day of the Dogs 3 (Bob and Grace Series) Oct 10, 2016
by Robert L. Conley
$3.99
I really enjoy writing about my alter ego. It makes me think that given the same set of circumstances I would react in the same manner. I'm not sure that's true but I can hope. I've been told that the amount of pain inside me must be overwhelming to write about a man that can kill without remorse. But I feel as though it's just the opposite.
Evil puts Dr. Bob in a position that gives him no choice. The men that hunt him live by no rules. Their end is to have money and power that they try and achieve at anyone's expense. Few can fight back; Dr. Bob and Grace are two of the few.
With this responsibility Dr. Bob has two redeeming legacies from beyond. The Old Indian and Dr. Bob's ancestors that help when they can; and the gift. The taking of another human life no matter if they are the scum of the earth will turn a man's insides sideways unless he uses the gift. The gift of the song that turns things right side up.
Read more
Other Formats: Paperback 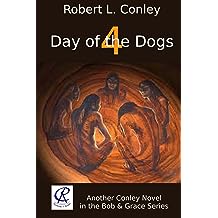 Day of the Dogs 4 (Bob and Grace Series) Oct 10, 2016
by Robert Conley
$3.99
I have fun writing this kind of book. The characters take over inside my head and all I do is transcribe.
The toughest to write, of course, is the Old Indian. No one has ever called me cryptic. To me he is the main man, ever looming over everyone's shoulder waiting to jump out of the page and into your heart with a campfire, a skillet, a fire stick, and a stack of fry bread ready to heat up and eat.
He's that voice in our head that tells us the right things to do. With it we understand right and wrong. Cryptic as he may be, he always leaves enough for you to know.
Read more
Other Formats: Paperback 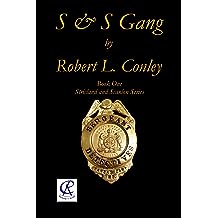 S & S GANG (Stricland and Scanlon Series Book 1) Mar 15, 2016
by Robert L. Conley
$3.99
It’s obvious that Conley’s favorite character in this novel is Stricland. I’m sure it’s because he doesn’t talk much but acts, since his mind isn’t full of jibber-jabber from others. That’s the only way a person can write.
Conley understands Stricland enough to know that he needs that one special person that accepts him and loves him in spite of all his flaws. She can travel the same road and is the partner he and Conley have been looking for all their lives.
I think I can safely say that Conley found his. Look at all of his dedications to Grace.
Read more
Other Formats: Paperback 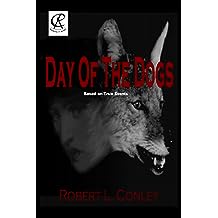 Day of the Dogs (Bob and Grace Series Book 1) Jun 21, 2015
by Robert L. Conley
$3.99
A pack of wild dogs have killed several of the rancher’s animals, but when a child is murdered, Dr. Bob's world changes. The father calls Dr. Bob, who is known for his tracking skills. When he looks at the mangled body of the young boy he understands he must reevaluate his beliefs in order to confront the threat. Alpha dog and friends are more than your average pet and proves it. Only because of a Presence that helps Dr. Bob does the playing field level out. Alpha dog still turns the hunter into the hunted but Dr. Bob's problems don't end there.

Dr. Bob's psychotic wife has been seeing a psychologist as a patient, who invites them over for dinner. Dr. Bob is put off by Gerald but Gerald's wife is a different story. She is literally the girl in his dream. The fire starts for Dr. Bob as soon as he sees her and Grace lights up as well. They both struggle with the relationship and try to keep things righteous as the sexual tensions rise.

Unknown to Dr. Bob, Gerald and Barb are having an affair; Barb wants to be free from her duties as a wife and mother. At Barb's insistence Dr. Bob is pushed into letting Gerald hunt the dogs with him and Gerald actually helps out the first time. The second time they are out, everyone is waiting for Dr. Bob and Gerald at the ranch for dinner. But as Dr. Bob and Gerald are closing in on the dogs Bob suddenly feels the Presence, knows the dogs are close and danger is near; he’s taken by surprise when Gerald pushes him.

Gerald believes the dogs will take care of the body and he returns to the ranch to tell the story of Dr. Bob taking off and he wasn't able to keep up and lost him in the woods. Mike Curtis, Dr. Bob's childhood friend, knows something is wrong and goes to find him and gets there just after the dogs.

This thrilling page turning odyssey based on true events keeps you up at night wanting to know what’s going to happen next. It’s also the first of many more to come since Dr. Bob really likes his alter ego and he gets to take Grace all over the United States and Canada chasing drug lords and human traffickers. He’s a modern day cowboy at heart with some help from the other side.