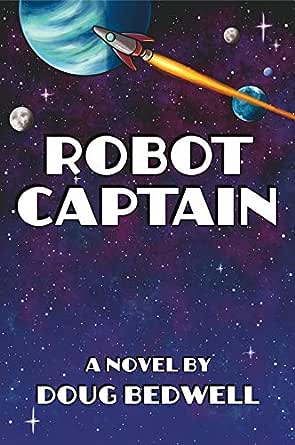 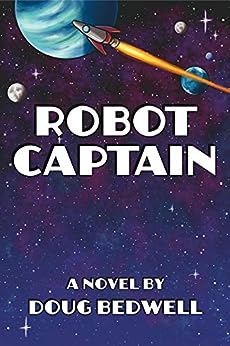 Doug Bedwell has written over fifty plays, which have been presented at professional, academic, and community theatres nationwide. In 2015, Space Bear Press published a two-volume set of his collected works. Robot Captain is his first novel. --This text refers to the hardcover edition.

A. Thomas
5.0 out of 5 stars Witty, insightful and fun
Reviewed in the United States on October 7, 2018
Verified Purchase
A good story, served with irreverent wit and insight, with just a trace of hopeful optimism, atop a bed of a universe gone awry.

Sprinkles from the Book of Vekk are included at no extra charge, including:

By its own logic, then, this is a holy, sacred book. Likely as not, it is destined to become one of the sacred tomes worshipped in a fraction, a very small fraction, of the countless planets colonized during the future human diaspora known as the Age of Exploration. Like minds tend to stick together, and in the future, stick together on whole planets. A few of those will be populated by the sort of people who enjoy the holy guide of hitchhikers, the holy hand grenade of Antioch, and the holy Book of Vekk. You know who you are.
Read more
2 people found this helpful
Helpful
Comment Report abuse

Terry Mulcahy
5.0 out of 5 stars Fun
Reviewed in the United States on March 29, 2019
Verified Purchase
Really enjoyed reading this. This mind candy was a bit like eating a fantastic desert with a philosopher.
Read more
2 people found this helpful
Helpful
Comment Report abuse

David Collins
5.0 out of 5 stars Fantastic and funny
Reviewed in the United States on September 18, 2017
Verified Purchase
A great read. Just the right touch of humor, absurdity, and suspense. It is reminiscent of The Hitchhiker's Guide to the Galaxy.
Read more
2 people found this helpful
Helpful
Comment Report abuse

Jeannette Jaquish
5.0 out of 5 stars Hungry carpets and lawn gnome spawn. So good I read it in one weekend!
Reviewed in the United States on July 20, 2017
This is a nearly brilliant piece of writing. Very similar in style to Douglas Adams' "Hitchhikers Guide to the Galaxy" in its humor, plot and bizarro logical developments, it is more exciting and suspenseful than "Hitchhikers" because, though the situations seem extreme today, future technology, and expanding space travel, markets and corporate power will make every one of these ridiculous predicaments possible. Doug Bedwell writes very well. Many of his paragraphs are delightful essays as they tell the story, in the style of Tom Robbins or Harper Lee. I read and re-read the one and a half page chapter 26 on lawn care, just for its delightful commentary on the human obsession with control. Of course, that lawn covered the interior of a hollow planet that encircled its sun and is plagued with mysterious appearances of defective lawn gnomes that don't exist in the inventory, one of the many curious scenarios in this imaginative book. This book is appropriate and entertaining for age 8 and older.
Read more
3 people found this helpful
Helpful
Comment Report abuse

Jason Hayes
5.0 out of 5 stars Robot Captain is just really f-ing fun to read!
Reviewed in the United States on July 24, 2017
Think Douglas Adams meets Philip K. Dick with less pretension . . . Doug Bedwell's Robot Captain is a timeless, extraordinarily relevant, expedition into, what could be, our future. I've used Bedwell's theatrical work in my Secondary classroom for several years and Robot Captain offers his voice in a new format, as a classically constructed novel. My students responded as favorably to RC as any of Bedwell's previous work. They found the content personally relevant, timely, interesting, fun and the narrative is "easy to get lost into" said one 17 year old. This year, we used Robot Captain in our AP English and Theatre classes along side the likes of Shakespeare, Luis J. Rodriguez, Henry David Thoreau, John Keats, Josefina Lopez and others. Capturing the interest of and inspiring teens is no easy feat. Bedwell writes in an easy, colloquial fashion conjuring the "everyman" and this allows adult and student readers time for reflection as we read and discuss his larger thematic elements. Beyond its educational applications . . . Robot Captain is just really f-ing fun to read!
Read more
3 people found this helpful
Helpful
Comment Report abuse

I was a little off-put by the formatting of the text at first, as it seemed jarring, but that quickly grew on me and I found a certain cadence to reading it. There were no less than a few chuckles had during my journey through the book and I'm really sad the story is over already.

Satisfied customer
4.0 out of 5 stars Enjoyable, fun and funny
Reviewed in the United States on June 6, 2017
A very engaging read. The author's dark humor is reminiscent of Douglas Adams'. A mark of a fun book, for me, is that I don't want to put it down; I found myself engrossed in"Robot Captain" that way. I look forward to more from the author. Recommended!
Read more
4 people found this helpful
Helpful
Comment Report abuse
See all reviews