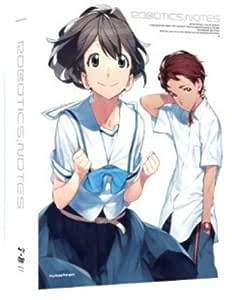 Kai and Aki dream of building a giant fighting robot based on a super-popular anime, but that’s going to be impossible if they don’t get more members into their school’s Robot Research Club. They’ll take anyone they can talk—or force—into joining them, including an eccentric robotics champion with a secret identity and a l33t video-game designer who’s spent one too many late nights online. Finally, their goal looks like it’s within reach.

4.6 out of 5 stars
4.6 out of 5
48 global ratings
How are ratings calculated?
To calculate the overall star rating and percentage breakdown by star, we don’t use a simple average. Instead, our system considers things like how recent a review is and if the reviewer bought the item on Amazon. It also analyzes reviews to verify trustworthiness.

B Kim
5.0 out of 5 stars a GIRL who loves STEM!!! (Science)
Reviewed in the United States on December 23, 2014
Verified Purchase
I bought this for my 12 yr old. My 8 yr old watched the whole series obsessively. So, clearly, it's OK for the younger set to watch, which not all anime (or any other kind of movie) is.

Also, VERY cool to see a girl excited about STEM and actively involved in it. She's the main driving force behind getting this robot built, running, and entered into a competition. Could be a great gift for the budding female scientist or engineer in your family or friends.

The series held the attention of everyone in the family. Good quality. Well written. Lots of fun to watch. We will get part 2.

Shiroe
5.0 out of 5 stars One of the most suprising Animes I seen
Reviewed in the United States on December 22, 2014
Verified Purchase
If you loved Choas;Head and Steins;Gate get ready for another trip into that world just only this time it's the near future this will be one of the most suprising animes you probably watch that involves mecha and mysterys. It's a must watch for all mystery fans. Plus the shipping was amazing I recieved my package 2 days earlier than expected.
Read more
One person found this helpful
Helpful
Comment Report abuse

8888
5.0 out of 5 stars Robotics Notes
Reviewed in the United States on November 9, 2014
Verified Purchase
I like this anime. I enjoy the story and the artwork is good. It not like IS anime or Line barrel of iron anime but it is good. I can not wait to see the 2nd season. I like to know what happen!
Read more
Helpful
Comment Report abuse

R. A. Caton
4.0 out of 5 stars Not bad, but not a work of genius. If you,ve seen Chaos;Head and Steins;Gate, then complete the trilogy
Reviewed in the United Kingdom on March 25, 2018
Verified Purchase
I'm writing this having just binge watched all 4 discs (2 discs part 1, 2 discs part 2)
Much is made of the fact that this is the third anime set in the universe shared by Chaos;Head and Steins;Gate (the semicolon is important) Frankly I'm disappointed. Without chucking spoilers about, there is a fair bit of "urgent thing needs doing - main protagonist stops doing anything at all in order to shout/show angst". So much could be achieved by just getting the a**e in gear. Likewise I think there's way too many "with one bound he was free" moments, deus ex machine if you like -
Frankly I thought we didn't get to the meat & potatoes of the plot until the last disc, the last three episodes... and even then we have what I would call a Titfield Thunderbolt moment which you may shudder at when it turns up.
Well, I paid for it, and I don't actually regret watching it, but..... its a passable if not great anime made in 2012 and set in 2018/20. Its a society much more wired and capable in the robotics field than we are, but the folks are just as prone to self blame and introspection.
Fight scenes not bad, not sensational. Characters not bad, not exceptional. Character specialities not bad, interesting....and I'm not going to spoil them for you when they are important to the plot.
I'm going to post this on both part 1 and part 2, you need to see part 1 to get part 2, and see part 2 for the significant parts of the plot. Sometimes a plot is convoluted and confusing because the authors are super cunning. I don't get that impression here, but I'll give it 4 stars.
Read more
Report abuse

jon
5.0 out of 5 stars Excellent Anime Series.
Reviewed in Canada on September 18, 2014
Verified Purchase
It doesn't quite live up to Steins;Gate in terms of narrative or characters, but it is still charming and the conspiracy driven plot are very fun. High quality packaging, nice bonuses. What I have come to expect of funimation.
Read more
One person found this helpful
Report abuse

MERC
4.0 out of 5 stars i liked it
Reviewed in the United Kingdom on September 15, 2014
Verified Purchase
I really liked this dvd is was far better than I was expecting it is well worth buying and I can not wait for the next part
Read more
2 people found this helpful
Report abuse