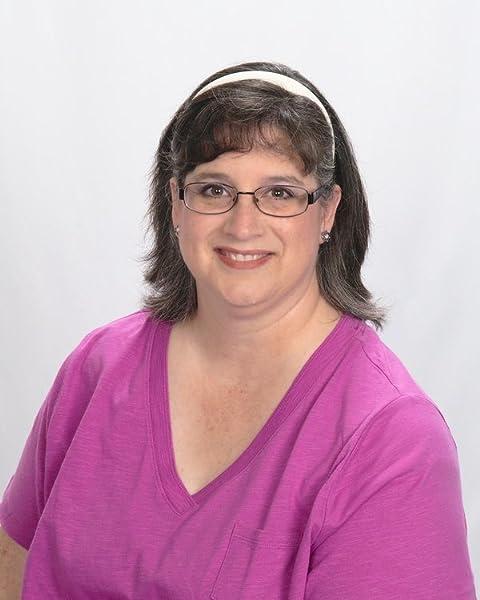 "This is a swift and compelling epic that readers of high fantasy will love!"
— Tony Abbott, author of The Secrets of Droon

Laurisa White Reyes spent many years writing for newspapers and magazines before mustering enough courage to pursue her dream of writing novels. Aside from her obsession with books, she also loves musical theater and fantasizes about singing on Broadway (one dream she does not intend to pursue). She lives in Southern California with her husband, five children, four birds, three lizards, two fish and one dog. Please visit her website www.laurisawhitereyes.com and her blog www.1000wrongs.blogspot.com. The Rock of Ivanore is her first published novel.

LM
5.0 out of 5 stars Couldn't put the book down......
Reviewed in the United States on May 11, 2012
Verified Purchase
Just finished reading the Rock of Ivanore. I couldn't put the book down. The author brought the story and characters to life. I could envision the characters - the boys, Master Zyll, the walking staff (Xerxes), fire breathing dragons, the cyclops, the Forrest, the villages, castles, etc. The story played out in my mind as I was reading it. This book can certainly be made into a movie. Also nice was that the author explained how the story came about. I was curious about that as I was reading the book. Can't wait to read more books from this author. Also was very impressed with the speed of delivery of this book. It was delivered in one day. Wow!
Read more
3 people found this helpful
Helpful
Report abuse

Marsha M.
5.0 out of 5 stars Great Fun
Reviewed in the United States on January 5, 2018
Verified Purchase
Even though this book is geared toward young adults or teens, I found it held my interest. I kept looking forward to the next chapter. Very well written.
Read more
One person found this helpful
Helpful
Report abuse

M. Harris
5.0 out of 5 stars Great book
Reviewed in the United States on December 29, 2013
Verified Purchase
I read this to my 8 and 11 year old boys. They loved it. It is such a great book with twists I did not see coming. It had nothing inappropriate for kids and was a very enjoyable read.
Read more
One person found this helpful
Helpful
Report abuse

Heather L.
5.0 out of 5 stars Fun Book!!
Reviewed in the United States on October 2, 2013
Verified Purchase
Great fantasy genre book for kids and adults! I can't wait until she makes another volume. I was completely entertained!
Read more
Helpful
Report abuse

Carla the Reader
5.0 out of 5 stars A Fantasy series that appeals to young and old.
Reviewed in the United States on September 18, 2016
The Rock of Ivanore by Laurisa White Reyes is the first book in the Celestine Chronicles. I began reading this fantasy book thinking it was for middle grade students, but soon realized that anyone including adults would enjoy this story. Marcus is an orphan in Quendel, a small town on an island. He is raised by the elderly enchanter Zyll as his apprentice. When the boys in Qendel are in their 15th year, they must go on a quest. This year's quest is announced and Marcus is going to accompany the boys. Their assignment is to find and return with "The Rock of Ivanore". The boys set off not knowing what the Rock is or where it can be found. Marcus and the other boys must forge a friendship and trust of one another if they want to be successful in their quest. Marcus must reach deep within himself to develop his powers of magic and find the strength to survive the wild lands and fierce enemies he encounters as he searches for the Rock. If he succeeds, he will live a life of honor; if he fails, he will live a life of shame performing manual labour. The plot of this book has many twists and turns. There are highs and lows, deception, cruelties and friendships forged. I though I had it all figured out and was confused several times.

This story is a fantasy quest with dragons, magic, monsters, heroes, villians, slaves, gems, friendships and battles. The characters are as varied as they are familiar. There is the hero (Jayson), the orphan (Marcus), the friend (Kelvin), the monsters (cyclops, Bryn: a Groc), the wizard (Zyll), the slaves (the agorans), the exiled angry offspring (Arik) and more. They all bring different characteristics, emotions and strengths to the story.

I am looking forward to reading the second in this series to see what is up next for Marcus and his friends. I recommend this book to public, school, class and family libraries. The publisher generously provided me a copy of this book through Netgalley.

Dessins Annees 80
4.0 out of 5 stars A page turner and character driven story
Reviewed in the United States on October 18, 2013
This book was a breath of fresh air to the fantasy fan in me. Not because it gave me something totally unexpected but because it gave me exactly what I needed. It was epic fantasy in its pure and simple form.

The world is appealing with treacherous and dangerous forests, beasts, magic and a variety of races like Cyclops for example.

There was a lot of characters that came into play but I enjoyed how Marcus, Kelvin and Jayson came together. Xerxes the staff could manage to be funny and annoying at the same time. The story was told from various POVs but it was done well because it was necessary for the story ARC and it was seamless.

I didn't quite expect it but most of the boys who set out on the quest to find The Rock of Ivanore did come back changed. I don't know if all the trials they went through (there was quite a bit) made them men but they grew wiser and possibly stronger physically and emotionally. In short this was a character driven story and a page turner.

Watch out for some interesting revelations. Some I suspected and others I didn't and they blew me away.

R Cotterill
3.0 out of 5 stars A coming-of-age quest
Reviewed in the United States on June 4, 2012
This is a fantasy adventure for younger readers - particularly aimed at boys, I would guess, given the scarcity of female characters. The story centres on a group of young boys sent out on a quest to prove their maturity. I found it a bit difficult to get into at the beginning, but the pace picks up after a while, and I did end up rooting for the boys by the end.
Read more
One person found this helpful
Helpful
Report abuse

Bill Tillman
5.0 out of 5 stars The Rock of Ivanore (The Celestine Chronicles)
Reviewed in the United States on October 3, 2013
Six fourteen year old set out on the annual quest of Quendal. To find the Rock of Ivanore without a clue as to where or what it is. Marcus Frye is the apprentice of the Enchanter Zyll and he must discover his magic as well fulfill the quest. A true epic fantasy enjoy the read.