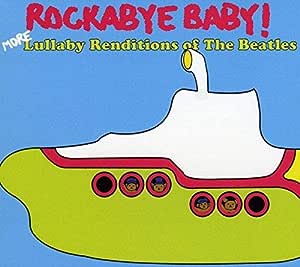 Save with Used - Very Good
$11.99
FREE Shipping on orders over $25.00 shipped by Amazon.
Arrives: Sunday, Jan 31
Ships from: Amazon
Sold by: BlueBirdNerd

Rockabye Baby! Format: Audio CD
4.8 out of 5 stars 105 ratings
Amazon's Choice recommends highly rated and well-priced products.
Amazon's Choice for "beatles for babies"
See all 6 formats and editions Hide other formats and editions
Includes FREE MP3 version of this album.&nbspProvided by Amazon Digital Services LLC. Terms and Conditions. Does not apply to gift orders.&nbspComplete your purchase to save the MP3 version to your music library.
Available at a lower price from other sellers that may not offer free Prime shipping.

When it's sleepy time but your little Punkin' or Peanut won't fall asleep, try counting sheep with Rockabye Baby. We've re-imagined even more of the Beatles' best-loved songs as blanket-soft instrumental lullabies. The familiar melodies of the fab four's chart-topping hits are perfect to ease your child down that often long and winding road to sleepville. Mom and Dad will also love these dreamy versions of their favorite songs, not to mention the blissfully quiet moments they inspire.

J. Kowalski
5.0 out of 5 stars The Best of the Two Rockabye Baby Beatles albums
Reviewed in the United States on December 21, 2009
Verified Purchase
We started playing music in our infant's nursery after our first visit to his daycare, where we noticed them playing music in the crib room to provide white noise for the sleeping babies. The idea of a lullaby-ized version of music we already enjoy listening to appealed to us, so we started out with a couple of the titles in the Rockabye baby series. We've enjoyed them so much that we're now up to ~15 of these, if for no other reason than to provide US with some variety as we rock our child before putting him down for the night. By removing the words and playing the songs at a more or less constant volume, they provide a soothing bedtime experience without the sudden changes in volume and tempo that might otherwise startle or excite a child that you're trying to get (and then keep) asleep.

As a huge Beatles fan, I was somewhat disappointed with the first Rockabye Baby Beatles album, as it really wasn't as good as some of the other CDs in this series. When I saw that a second CD had been released, I bought it hoping that it would give me a better quality Beatles experience for my son to listen to. Fortunately this one succeeds where the other one fails, and is definitely worth buying if you are looking for Beatles lullaby music.

For parents looking for the top CDs we have tried in this series, I would highly recommend the Coldplay (our favorite of the 15 we have), Led Zeppelin, Queen, Rolling Stones, Guns N' Roses, and Beach Boys albums.

S. Vaughan
5.0 out of 5 stars Impossible not to love this
Reviewed in the United States on May 24, 2019
Verified Purchase
As a second generation Beatles/Paul McCartney fan, I am SOOOO happy to have this for my baby (soon to arrive this summer). It is so precious and perfect to play in my baby's room! You cannot go wrong with this item! Great to gift a Beatles fan for their newborn!
Read more
Helpful
Report abuse

Katie B.
5.0 out of 5 stars Perfect for even the tiniest Beatles fan (who needs a nap!)
Reviewed in the United States on August 31, 2015
Verified Purchase
Great CD! We love the Beatles, and this makes rocking my daughter to sleep easier. She likes the instrumental, calming music, and I like that if a song gets stuck in my head, it's a Beatles song at least. My older daughter liked this CD so much when she heard it playing that we ended up buying the other Beatles Rockabye Baby CD for her to listen to at night!
Read more
Helpful
Report abuse

Seattle Girl
4.0 out of 5 stars Love the melodies!
Reviewed in the United States on October 25, 2011
Verified Purchase
I bought this item after listening to it in a friend's baby's nursery room. It was so peaceful and I rocked the baby to this all the while humming along with the Beatles songs that were so familiar to me and my generation. By the way, this and a few other Rock a Bye Baby lullabies are what they have playing all the time on the twins iPod player in their room. I bought it so my twins grandsons could listen to it as well.
Read more
One person found this helpful
Helpful
Report abuse

QuiltLover
5.0 out of 5 stars Perfect Baby Gift
Reviewed in the United States on April 11, 2018
Verified Purchase
I have given Rockabye Baby cds to many couples having little ones, and they are ALWAYS a favorite. You can't go wrong on this choice.❤
Read more
Helpful
Report abuse

anita
5.0 out of 5 stars Rockabye Baby! More Lullaby Rendentions of the Beatles
Reviewed in the United States on March 10, 2013
Verified Purchase
This CD is wonderful! This is my second purchase as my 4 y/o granddaughter loves it so much she wanted her own. Its a very peaceful, quietly melodic soothing CD great for going to sleep or just a relaxing quiet time for babies and adults to enjoy. It will be on my list now for gifting a new baby and the parents!!
Read more
Helpful
Report abuse

B&B
5.0 out of 5 stars Wonderful CD!
Reviewed in the United States on April 9, 2014
Verified Purchase
Both Beatles Rockabye Baby CDs are Terrific! My child LOVES the Beatles music as a result of listening to this since infancy! He recognizes music on TV, in elevators, stores, on radio....it's been a wonderful learning CD and it's great for going to sleep at night and to calm them down from an active day!
Read more
Helpful
Report abuse