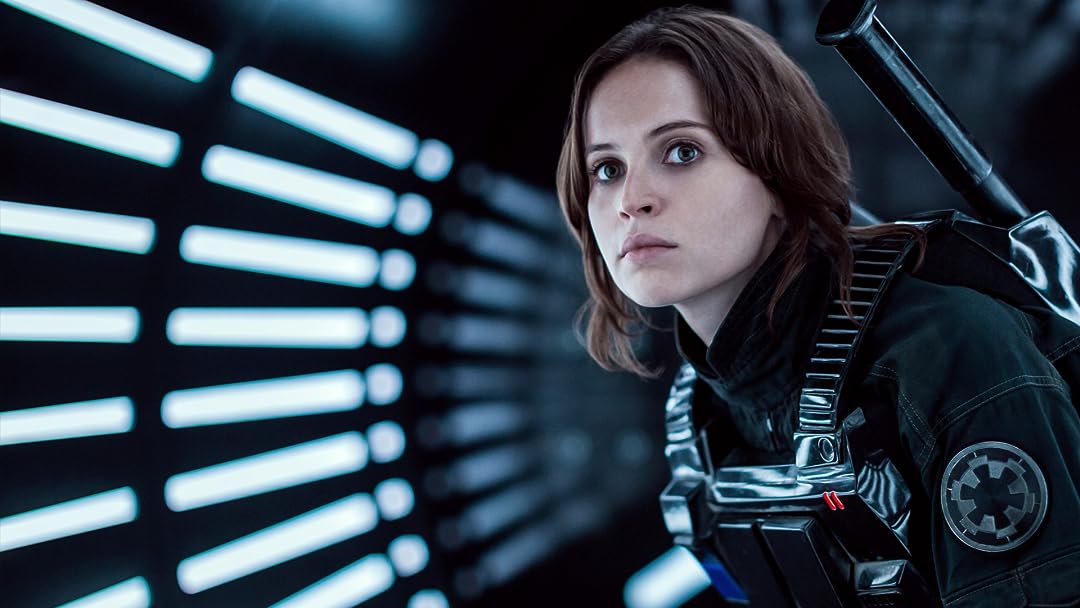 Rogue One: A Star Wars Story

(23,309)
7.82 h 13 min2016X-RayHDRUHDPG-13
From Lucasfilm comes an epic adventure – Rogue One: A Star Wars Story. In a time of conflict, a group of unlikely heroes band together on a mission to steal the plans to the Death Star, the Empire’s ultimate weapon of destruction.

Nomad SnakeReviewed in the United States on February 9, 2018
5.0 out of 5 stars
A differet kind of Star Wars movie
Verified purchase
Better than The Last Jedi in my opinion. I like that they went back to the old Empire/Rebellion era. It was the Disney/Star Wars attempt at a gritty movie and they mostly pulled it off. It can always be more gritty, but it still had to appeal to the masses. The characters were good and fleshed out for the most part. The sad thing is that since this is a one off story, the characters that seemed interesting will never been seen again. It is not the happy go luck romp that was The Force Awakens and it was not the mess that The Last Jedi was. It is definitely worth a rent if not a purchase.
109 people found this helpful

Kid at Heart and Renaissance ManReviewed in the United States on December 2, 2017
5.0 out of 5 stars
My new favorite Star Wars Film
Verified purchase
I enjoyed Rogue One better than any previous Star Wars film. The acting, storyline, and cinematography is first-rate. This film answers so many questions about what happened between the destruction on the Jedi Temple in Episode III and the destruction of Alderaan in Episode IV. I don’t get tired of watching it over and over.

The most amazing thing in this film is the incredibly realistic CGI (Computer-Generated Imagery). It is so realistic that at some points it is unsettling.

JrcjcReviewed in the United States on May 21, 2018
5.0 out of 5 stars
The best post prequels Star Wars Film to date.
Verified purchase
Very good movie. A little darker than your regular Star Wars film.

I want to say this: Rogue One is far and away a considerably superior film in writing, production, acting, and direction than the abomination that is The Last Jedi.

HMS WarspiteReviewed in the United States on January 13, 2018
5.0 out of 5 stars
Long, long ago, in a galaxy far, far away, yet familiar...
Verified purchase
In the first Star Wars movie (A New Hope, released in 1977), one very important detail was never explained. The rebels had somehow obtained a copy of the plans for the Death Star. Now finally in 2017 comes the backstory, in "Rogue One", a thrilling little movie featuring rebels, the Empire, the Force, a few familiar faces, and a few new ones.

"Rogue One" centers around Jyn Erso, a victim of the Empire at a young age, who finds an unexpected opportunity to strike back when she gets caught up in a rebel raid. Together with the rebel agent Cassian Andor and a ragtag band of rebel fighters, they will undertake a desperate mission to the Imperial Base on the planet of Scarif. Once on the ground, the rebels will be in a race against time to find the plans and somehow get them off Scarif. Guile, fortitude, and the Force will somehow have to make up for the overwhelming odds they face.

The movie is nicely done, while staying strictly consistent with the Star Wars universe. Felicity Jones and Diego Luna are surprisingly engaging as Jyn Erso and Cassian Andor. Alan Tudyk provides both attitude and comic relief as the droid K2SO, reprogrammed, more or less, to work for the rebels. Highly recommended to Star Wars fans as an afternoon's entertainment. This DVD version does not have any extra features.

VeridicusReviewed in the United States on January 20, 2018
5.0 out of 5 stars
Best Star Wars Based Movie to Date
Verified purchase
This is easily, yes easily, the best Star Wars based film in the entire franchise to date. It has a "grown up" feel to it that the others lacked (other than Empire), and the characters are all fantastic. No dumb Jar-Jar type characters. No annoying little boy actor, no Hayden Christiansen and Natalie Portman. No campy nonsense. There is just deep, complex characters that you care about. The acting across the board is superb. The drama is played out exceptionally well, and they are supported in a proper way with special effects that immerse you in the human drama and the desperation of the Rebel cause. Well cast. Well directed. I hope more productions from Disney in the Star Wars universe will expand. Great job!!
84 people found this helpful

KeoghReviewed in the United States on November 30, 2017
5.0 out of 5 stars
Hope is Alive
Verified purchase
Wow! This is easily one of my favorite Star Wars movies ever. It was edgy, fast paced, focused, brutally honest and really well conceived to fit seamlessly into the timeline. The co-pilot / robot is brilliant. The cinematography is top notch - loved the locations. The fledgling rebellion felt desperate and overwhelmed. Liked all of the nods to the other movies. It also answered some pretty big questions regarding the Deathstar. This may not be the best one for the kids; but, I loved it!
47 people found this helpful

joel wingReviewed in the United States on March 28, 2020
5.0 out of 5 stars
1 of the only Star Wars movies worth the price of admission
Verified purchase
Of the 11 movies in the Star Wars franchise only three are worth the price of admission. Rogue One is one of those. The original Star Wars trilogy was not only about a battle between good (the rebels) and evil (the Empire), but about a revolution. The oppressed were fighting against the oppressors. Rogue One was a prequel to the very first release Star Wars: A New Hope. It not only kept up the theme of rebellion, but had one of the best stories which is why it stands out amidst a lot of really bad attempts to cash in on the original trilogy.

The theme of Rogue One is set right at the beginning. An imperial officer Orson Krennic (Ben Mendelsohn) arrives on a planet to collect Galen Erso (Mads Mikkelsen) and his family to force him to go back to developing the original Death Star. Krennic said when they worked together they were so close to providing peace and security to the galaxy. Erso replies that he was confusing peace with terror. Imperial powers like to talk about how they are bringing stability to the world, but that’s achieved through force, killings, and oppression. Imperialism brings freedom for the strong to exploit the weak. Oppression always leads to resistance, and sometimes revolution.

This theme of the revolution would be explored more at the start of the film. For instance, the rebels are divided. Some are scared of standing up to the empire and run and hide. Others have become radicals like Saw Gerrera (Forest Whitaker) who is carrying out a guerrilla war on the planet Jedha. Cassian (Diego Luna) is a rebel spy who has betrayed and killed people so many times he’s lost sight of why he joined the struggle. There are still some who believe in hope and want to fight. That’s what the story centers around. Erso’s daughter Jyn (Felicity Jones) attempts to find the plans to the Death Star which will reveal a fatal flaw in the weapon her father created. If people remember Star Wars: A New Hope the whole movie was about Darth Vader trying to find those plans, while Luke, Princess Leia, Han Solo and Chewbacca and the droids were trying to get them to the rebels.

Like the original Star Wars trilogy the movie isn’t all action and rebellion. An android K-2SO provides some witty one liners making fun of the humans throughout the movie.

Finally, Rogue One should really be congratulated because the writers finally realized that in a galactic system there were just not white people. The movie had a multi-cultural cast that reflects the world. Cassian was a Latino. An imperial pilot who joined the rebellion Bodhi was played by Riz Ahmed an Arab. Saw Gerrera was played by Forest Whitaker who is African American. Two from Jedha who join Jyn are Chirrut played by Donnie Yen and Baza Malbus played by Jiang Wen who are Asians. It was nice to see a science fiction movie reflecting the world.
14 people found this helpful

R. HarlandReviewed in the United States on August 10, 2018
5.0 out of 5 stars
My Favorite Star Wars Movie.
Verified purchase
A lot grittier than the usual Star Wars fare. It starts off with an Indiana Jones vibe but quickly turns into an honest to goodness war war movie. A lot like Hell Is For Heroes, The Dirty Dozen, and many other WW2 films. The combat scenes are urgent and intense. Most importantly the Darth Vader character, who felt so watered down after the prequels, is completely redeemed. When he shows up it reminds you of Saving Private Ryan when the Tiger tank shows up. The good guys knew their crappy was about to get a whole lot worse. I recommended it to many of my friends who don't care for sci-fi films and they enjoyed it as well.
27 people found this helpful
See all reviews
Back to top
Get to Know Us
Make Money with Us
Amazon Payment Products
Let Us Help You
EnglishChoose a language for shopping. United StatesChoose a country/region for shopping.
© 1996-2022, Amazon.com, Inc. or its affiliates