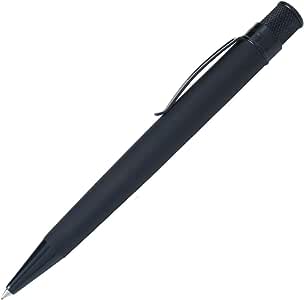 For those looking for the latest design styles, the solid black Stealth Tornado Deluxe pen features a smooth flowing rollerball ink. Can also be converted to a ballpoint with the Easy Flow 9000 refill.

4.6 out of 5 stars
4.6 out of 5
173 global ratings
How are ratings calculated?
To calculate the overall star rating and percentage breakdown by star, we don’t use a simple average. Instead, our system considers things like how recent a review is and if the reviewer bought the item on Amazon. It also analyzes reviews to verify trustworthiness.

Vlad T.
1.0 out of 5 stars Solid Pen, cheap clip, that makes pen unusable over the time.
Reviewed in the United States on February 20, 2017
Size: 5.000Verified Purchase
this is review about RETRO 1951 black deluxe pen. the pen itself looks great and seems to be solid, but the clip on the pan is very thing and flimsy. While the pen was a brand new I was able to carry it securely in a front pocket of dress shirt. but after carrying pen few times in front pocket of my blazer the clip doesn't spring back to it's original position and I cannot carry this pen anymore in my dress shirt pocket - it's just not secure anymore there and just falls out of the pocket when I bend. I'm not sure if this is my luck or just a design flaw in general.
Read more

Nick S.
2.0 out of 5 stars Not Especially Durable
Reviewed in the United States on November 24, 2019
Size: 5.000Verified Purchase
This is my second Retro51 pen. I purchased the stainless Tornado a while back and have been very happy with it. I recently purchased the black "stealth" model and sadly, it's not especially durable - the coating began flaking off within weeks. Now, less than a month later, the knob used to deploy the point is an ugly mess of mottled black and brass.

EDIT: I reached out to Retro51 and they sent out a replacement knob/cap.

Jake R.
2.0 out of 5 stars Nice pen for the money, great ink refill
Reviewed in the United States on June 15, 2015
Size: 5.000Verified Purchase
Update - July 12, 2015: I decided to return the Stealth Tornado about two weeks after receiving it because the twist deployment mechanism failed. The pen did not take a spill or fall, it rode in my shirt when it was not in use. The twist mechanism simply failed to deploy the refill completely, leaving it about halfway between retracted and deployed. No amount of coaxing allowed me to deploy the refill fully, and I wasn't able to find a way to disassemble the twist mechanism. Since Retro charges $7.50 for repair work, if you factor in the $6.00 USPS charges you for a flat rate small box, we're talking about spending almost $14.00 to send it back for repair; the pen cost $24.00 new. It is a nice pen, but the deployment mechanism failure left me with doubts on Retro's quality control. At least the Ice Blue Tornado I bought together with the Stealth is still working without issues.

Original review: Decided to go for the Stealth Tornado after reading many pen blogs online and the general praise the Tornado line receives is well placed. The pen arrived securely wrapped in Retro's trademark tube with foam lining. Upon taking it out of the tube, the weight distribution is pretty much spot-on, pretty much in line with the tip of the pocket clip. I'm a sports journalist, so I'm basically writing or taking notes eight hours a day.

Upon barrel disassembly, its construction appears to be brass with a nice black lacquer finish on the barrel's surface (almost feels like anodized aluminum to the touch); the tip cone has a nice, high-gloss finish, same as the pocket clip and Retro's knurled twist mechanism. Not a heavy pen, but it does have a nice heft to it.

Twist mechanism offers the right amount of resistance, but can still be operated with one hand. Pen tip deployment is smooth and consistent and, more importantly, there is zero wiggle when writting. Upon inspecting the pen tip deployment, there's basically no dead space between the pen tip and the cone tip hole, which means you won't hear any rattling or knocking when writing.

The pen came with a Retro 1951-branded Schmidt P8126 capless black rollerball refill. It's my first experience with a Schmidt refill (I've always been fond of the Pilot G-2 rollerballs), but I have to admit it offers a great writing experience. People always say the G-2 refills feel "scratchy" when writing, and after using the Schmidt refill, now I understand whey they say that. There's very little friction, ink transfers to paper flawlessly and it throws down a pretty thick line (even though it has the same tip size, 0.7, as the G-2 refill - at least according to the specs available on Schmidt's website) that I'm still getting used to (G-2 writes thinner). This also means that, at least in my case, I'll need to change my notepads to compensate for the amount of ink it releases (it shows through a regular OfficeMax steno notebook).

As stated earlier, pen has good balance and excellent weight distribution, so I feel no hand fatigue during extended writing sessions. A notebook change will be required to keep the ink from (almost) bleeding to the side of the paper that's already been written to.

The cost for the pen and the nice refill it comes with is more than reasonable. Time will tell if the pen's construction holds up, but based on my time with it, with proper care, it should last many years. If you prefer ballpoints, the Tornado will also take Schmidt's EasyFlow 9000 refill. The Stealth is not pretentious (they offer many other models if that's what you are looking for) and has classic looks, but it is a very nice pen for the money.

This is the most frustrating ink cartridge. It skips big time. Gets scratchy. It is a Retro 51 cartridge. I really like the design of this pen, so I tried another Retro 51, an emerald green. Beautiful pen. Same garbage ink cartridge. What is going on??? Are there better refills available from other brands that will fit this pen? Please let me know so I can enjoy these $20 pens and I might be more of these.
Read more
One person found this helpful
Helpful
Comment Report abuse

Zara Thomas
5.0 out of 5 stars Effortless Writing
Reviewed in the United States on April 10, 2018
Size: 5.000Verified Purchase
I recently bought this pen for my husband and he says: “I saw a review that said the pen is back end heavy, but I have a big hand (XL glove size) and it balances perfectly. The rollerball cartridge writes flawlessly and smoothly, and the body of the pen is textured and is easy to grip. It also has a nice sleek design, with all these reasons making this one of my favorite writing instruments in my collection.” I tried wrote with it too and even with my small hand I felt like it was well balanced when writing.
Read more

Edgar A. Poe
2.0 out of 5 stars Black gets scratched looking terrible.
Reviewed in the United States on November 19, 2016
Size: 5.000Verified Purchase
I bought a Retro 51 Tornado pen years ago that has a textured stainless barrel which I still use and it looks like new. I bought the stealth black version in both pen and pencil. They function well but in a short time the black finish on both is scratched and looks terrible. I do carry them in my pants' pockets so there are car keys etc sharing the space. If it was in a shirt pocket I imagine it would be fine. I would not purchase the black versions again.
Read more
3 people found this helpful
Helpful
Comment Report abuse

Jose F. Ferrell Jr.
5.0 out of 5 stars So good I bought it twice
Reviewed in the United States on June 20, 2018
Size: 5.000Verified Purchase
So good I bought it twice. Well... Because my dad took the first one... So it became a Christmas gift. But seriously, this pen looks good, writes amazing and is smooth. HEED the warnings though, I had it in my pocket once and it must've opened and that pair of pants now has an ink stain. So now I just transport it in the pen case they ship it in because it's cool anyways. So if you have a habit of carrying your pen in your pants, get the other ink insert they have... Otherwise enjoy.
Read more
One person found this helpful
Helpful
Comment Report abuse

AlbinoRhino
4.0 out of 5 stars Great Roller Gel Pen!
Reviewed in the United States on October 7, 2015
Size: 5.000Verified Purchase
PROs:
-Great packaging
-Feels great in the hand, though I can't comment about how well it will hold up over time as of right now
-The ink is AMAZING. I came from using a G2 though, so that might not be saying much
-The compared to my friend's Tornado, I can definitely say that the extra $ for the Stealth edition is worth it

CONs:
-Mechanism for twist deployment seems to require quite a bit of effort to twist, or at least more than I believe it should require
Read more
3 people found this helpful
Helpful
Comment Report abuse
See all reviews

KJL
1.0 out of 5 stars Don't bother.
Reviewed in the United Kingdom on February 19, 2018
Size: 5.000Verified Purchase
Received today my "stealth" Tornado. Goddammit 30 Pound pen, and there is nick in the coating of barrel that shines like star. Very poor quality control.
Read more
Report abuse

Thiago M
5.0 out of 5 stars Amazing product
Reviewed in the United Kingdom on May 14, 2020
Size: 5.000Verified Purchase
I am not a pen expert
I write a lot at work and wanted something better than a simple pen for daily use
After a quick search found this pen
Very happy with the choice, in fact I lost my first one and bought a second one right away
Not that pricy
Read more
Report abuse

myles
5.0 out of 5 stars Retro 51 *****
Reviewed in the United Kingdom on July 17, 2019
Size: 5.000Verified Purchase
Bought this pen as an everday carry to supplement my fountain pens, found it excellent, well balanced and practical.
Read more
Report abuse

Page 1 of 1 Start overPage 1 of 1
This shopping feature will continue to load items when the Enter key is pressed. In order to navigate out of this carousel please use your heading shortcut key to navigate to the next or previous heading.
Back
Next
Pages with related products. See and discover other items: fun ink pens