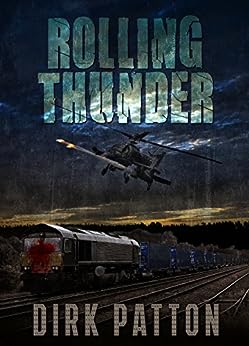 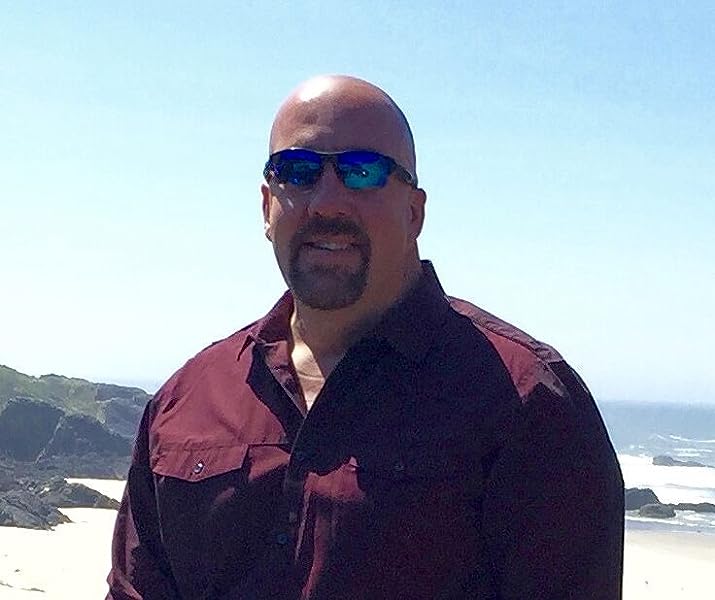 by Dirk Patton (Author) Format: Kindle Edition
Book 3 of 19: V Plague
See all formats and editions
Sorry, there was a problem loading this page. Try again.
In the eagerly anticipated third installment of the high octane Voodoo Plague series the stakes are raised as millions of infected threaten John’s escape plan. As the group fights to survive they begin encountering more of the smarter infected and other survivors that are taking full advantage of the chaos to prey on their fellow humans. The only safety is to the west but at every turn the small group is thwarted in their efforts to escape.
Read more
Previous page
Next page

Dirk Patton is the bestselling author of the V Plague and 36 series. He is an avid reader, gym rat, and a rabid Seattle Seahawks fan (yes, he was a fan even when they werent any good). Dirk credits the Matt Helm series by Donald Hamilton and the Jane Whitefield series by Thomas Perry as the biggest influences on his writing style. --This text refers to the audioCD edition.

Dirk Patton is an American author and screenwriter. He has written and published over 23 novels, and counting, and two TV series pilots that have been optioned by a major production company. You can find him on the internet at www.DirkPatton.com or Twitter @DirkPatton or on Facebook at www.facebook.com/RealDirkPatton

Jules
5.0 out of 5 stars WHOO! HOO! Again Thanks, Dirk!!!
Reviewed in the United States 🇺🇸 on November 3, 2014
Verified Purchase
Love this story. Was reading at the Dentist's office and was really irritated when they came to get me. Just one more chapter please. You must read the books in order to get a true feel for the characters. One suggestion, CUT THE HAIR RACHEL!!! You are going to get everyone killed. Okay, just read the books. Downloading the next one now.

Great writer. Great story. I care about the characters, they are believable and I can see the action as it happens. I highly recommend this series and the author.

So, that was my review after reading this book. I have now read all of the books on my kindle, pre-ordered #8, purchased all of them in soft cover and even purchased the audio book from Audible. I am waiting for all of them to come to Audible because I love being read to. They do need a different narrator though. Am I obsessive? Just a wee bit. I have read the series 3 times so far and each time it gets better. The characters are believable and I truly care about them. John is a great person and only wants to find his wife. Rachel just wants to survive and realizes that her best chance lies with John. Dog? Well, Dog is just really cool. I cannot recommend this series enough. Yes, there is violence, some pretty graphic. But they are fighting infected people trying to eat them for God’s sake! If you cannot deal with very well described violence, or a lot of military scenes, then go elsewhere for your entertainment. I can't wait to read each book but then I’m distressed when I finish one.

You must read them in order. That is the only way you will understand the story line and the world that the characters are trying to live in. Most books end and the next picks up at that spot. Some scenes in the later books have brought tears to my eyes because I have grown to truly care about the people who inhabit this world.

I would recommend reading the John Chase story after reading at least one of the Voodoo books. This will allow you to get to know him a little in this current world and understand some of what has made him into the man that he has become. Other things will fall into place.

If you do not like “Zombies”. If you do not really care about “military” scenes, descriptions, etc. If you are not particularly fond of “apocalypse” stories please move on instead of leaving a bad review. I know that not everyone likes everything but just move on. Please, this author does not deserve it. Nor do these stories.
Read more
Helpful
Report abuse

C. M. Wilson
5.0 out of 5 stars Post-apocalyptic roller coaster ride.
Reviewed in the United States 🇺🇸 on August 23, 2014
Verified Purchase
The Voodoo Plague series by Dirk Patton is an original, character-filled, action-packed, compelling post-apocalyptic tale. The first book in series, Voodoo Plague, starts with a businessman, John Chase, experiencing some disturbing events while in a hotel in Atlanta. He rescues a woman, Rachel, from an attack and they quickly go on the run as they realize that people have become rage-infected due to a bioterrorist attack. They decide to head to Arizona to find John’s wife, Katie, and quickly get immersed in not only survival, but also helping others survive. In Book 3, John, Rachel and Dog continue to fight their way to the West.
There are several unique elements that make the series stand out from the ordinary.
1. The “zombies” are not undead; they are regular people who have been infected with a bioterrorism virus. Females are fast, 28 days later rage-filled creatures, and some exhibit intelligence, while males form slow shambling Romero-type herds.
2. This is not a story about an average Joe rising to the occasion -- the central character in the series, John Chase, is a highly trained ex-military superhero. He keeps going and going, like the Energizer bunny, and is skilled to the extent that the reader has to suspend disbelief at some points. But being a superhero has its benefits, and it allows John to charge from action-packed situation to situation, which makes for a tense roller-coaster ride -- bringing us to point 3.
3. Action is non-stop. Infected! Nukes! White Supremists! Tornados! Slavers! Floods! Train Wrecks! Plane Crashes! Redneck Shit-kickers! Rescues! Bioterrorism! Serial Killers! Invading Forces! Helicopter Crashes! There is seriously no breathing space ever in this series, which means there is never a logical breaking point when you can go to sleep or leave the book for a while.
4. The characters, including those in supporting roles, are all interesting. I didn’t much like John at first, as he is bit macho in the first book, but the other characters caught my attention, especially Dog. Rachel, the rather clichéd “stripper with heart of gold” (and smarts too) is tough and resilient and likeable. Crawford, Jackson, Roach, and other characters add depth to the story. Though you don’t want to get attached to them….these are normal mortals unlike John!
The Voodoo Plague series is good fun, and I recommend that you get the entire set, call in sick to work, and tell your family that you need some personal space. Then, curl up in a dark room and enjoy the roller-coaster ride as John, Rachel, and Dog try to survive the action-packed events in Dirk Patton’s extraordinary, post-apocalyptic world.
Read more
One person found this helpful
Helpful
Report abuse
See all reviews

Dragonlady
5.0 out of 5 stars Rollicking good story
Reviewed in the United Kingdom 🇬🇧 on November 2, 2014
Verified Purchase
I have read the previous books in this series and have no hesitation in recommending them if thrills and heart stopping excitement with well written characters are your thing. I am no spring chicken and have read literally hundreds of books in my time. The story line takes you on a wild journey to find peace and safety in a world gone mad. All the more frightening because it may just happen!!! I don't crib about things like `that sort of aircraft wasn't around" or that's not medically correct" I read books to be entertained, frightened, cry or just escape. Please give this series of books a chance as I said I highly recommend them. Have just had book 4 delivered to my kindle so won't get much sleep tonight.
Read more
Report abuse

kim green
5.0 out of 5 stars Really good
Reviewed in the United Kingdom 🇬🇧 on November 2, 2014
Verified Purchase
I'm half way through book 4 and just bought book 5 and had to go back on myself to leave a comment because this series is fabulous . Read loads of zombie books since owning my kindle and have got right in to it but this series has got to be up there in my top three authors , yeah it's well over the top cos it has it all , infected , human scumbags , serial killer , Chinese , Russians , everything but I love it , an easy read,plenty of action and the characters are likable , a thoroughly good read and I'm a middle aged woman ! Dog rocks !
Read more
One person found this helpful
Report abuse

Georgette.H.Denholm
5.0 out of 5 stars OMG
Reviewed in the United Kingdom 🇬🇧 on December 17, 2019
Verified Purchase
How anyone can manage to maintain this level of action packed story line,and make it sound believe,is a bit of a mystery.
But Mr Patton does just that ,and then some.
I don't think anyone who likes, Apocalyptic books will be disappointed.
On to the next one .YAY.
Read more
Report abuse

Mrs. J. Sandland
5.0 out of 5 stars A BRILLIANT SERIES
Reviewed in the United Kingdom 🇬🇧 on June 20, 2015
Verified Purchase
This is an amazing series of books - the story just goes from strength to strength with a never ending battle to survive the apocalypse. I love the way this author picks up the next book exactly where he left the previous one - there is no leaps in time - the story just flows.
A BRILLIANT SERIES WRITTEN BY A BRILLIANT AUTHOR - HIGHLY RECOMMENDED.
Read more
Report abuse

CHRIS
5.0 out of 5 stars Action packed from start to finish
Reviewed in the United Kingdom 🇬🇧 on June 22, 2016
Verified Purchase
Love this book and the first two . Incredibly exciting, the characters are believable and Dog is terrific, although I do worry about him. So please Dirk, NEVER write him out.
Have downloaded the next two books and can't wait to get started, but I don't dare read them last thing at night, the adrenalin would keep me awake as I'm right there with John, Rachel and Dog.
Read more
Report abuse
See all reviews
Report an issue
Does this item contain inappropriate content?
Report
Do you believe that this item violates a copyright?
Report
Does this item contain quality or formatting issues?
Report