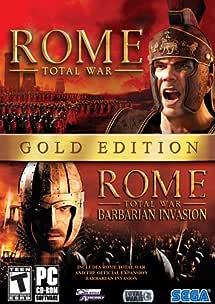 Rome: Total War Gold Edition brings together Rome: Total War and it's expansion, Barbarian Invasion. Available in one offering, this is the opportunity for armchair Generals to conquer and control the greatest empire ever known by man. In Rome: Total War you must guide one of three noble Roman families on a century spanning quest to seize control of the Roman Empire. In Barbarian Invasion witness the decline of Rome as it come under attack from Barbarian Hordes and a bitter internal struggle between rival factions.

4.4 out of 5 stars
4.4 out of 5
460 global ratings
How are ratings calculated?
To calculate the overall star rating and percentage breakdown by star, we don’t use a simple average. Instead, our system considers things like how recent a review is and if the reviewer bought the item on Amazon. It also analyzes reviews to verify trustworthiness.
Top reviews

Baconologist
5.0 out of 5 stars Get the "Total Realism Add on" and this game is perhaps the best historical sim in the past 20 years.
Reviewed in the United States on June 7, 2016
Platform: PC DownloadVerified Purchase
This may well be the single best game I've ever played. I bought the hard copy version back in the mid 2000s, and when the Gold Edition went on sale for $2, how could I say no? Yeah the graphics are dated, and the installation on Windows 10 is nothing short of frustrating, but it has some serious staying power. In terms of dollars per hour of game play, this ranks well up with the top, but with one caveat:

If you buy this, forget playing the stock game. Find yourself the "Rome Total Realism" add on -- it is perhaps the most amazing fan-created add-on for any game in human history. The depth of realism, the attention to detail, and the historical research the creators put into that add on takes this game from maybe a 6 out of 10 to a 10/10.

By the way, for installation on Windows 10, you'll need to run the game in XP SP 2 compatibility mode, and edit the default preferences setting for your monitor. There's a guide online for this. I can't link to it in the review, but a Google search will pull that up.

Survivalist camping guy
5.0 out of 5 stars Total War
Reviewed in the United States on January 29, 2013
Platform: PC DownloadVerified Purchase
I used to love AOE, and then on a whim I tried this after playing AOE III for a long while. This series requires a lot more strategy, and I personally find a role playing aspect with the generals, and the family tree. The graphics are no longer great as they used to be, but the level of detail is still impressive. I remember when i first played this game, and zoomed in on the action. I couldn't believe that I could watch every single death in the battle. This is, in my opinion, the best of the Total War series, and if you enjoy RTS games, this is a must have. Unlike most of the other RTS games that are wildly popular, StarCraft, AOE, WarCraft etc., this game doesn't rely on someone building an army up in 2 minutes, and attacking someone who is a little behind. Those games do not require the same level of strategy as this one does when it comes to the battles. The most memorable battle for me, and because of this i still play, was when i forgot about a tiny little army of 100 or so men on a tiny little island became under siege and since i was concentrating on taking over the european continent, i didn't have time to send any reinforcements and was forced to fight. At the time i had yet to lose a battle, but against a much larger force 800 or more men, i was able to win. I lured them to a bottle neck with my general, and closed them off. The only reason i won was because it was their general chasing mine, and when i closed the bottle neck i managed to kill their general, and after half their force was gone, they fled. It was the most heroic victory i have ever managed to win. This game is great, and will continue to be for many years.
Read more
2 people found this helpful
Helpful
Comment Report abuse

Hrothgar
3.0 out of 5 stars Total War's Finest Offering
Reviewed in the United States on April 28, 2013
Platform: PCVerified Purchase
2 Total War games were released prior to Rome: Total War, which set the stage for one of the best PC strategy games. Shogun, it's debut, introduced the "chess piece" movement system, cut scenes for actions, historical updates, and real-time combat; while Medieval placed those elements in a more familiar, Western location.

Rome: Total War introduced a new movement system, which determined battle locations by armies' locations on the campaign map; no more were the battle maps randomly generated according to elements in a province, such as mountains, forests, or plains. It also introduced much better graphics in both the campaign and battle maps, as well as a better interface. It also introduced religious bonuses, such as experience, population, law, and happiness received for building shrines to certain deities..

I have played Rome: Total War since 2004, and I have conquered the Romans, and Europe with most available, and some unlockable, factions. I took elephants over the Alps with Carthaginian generals; I conquered the British Isles with the Germans; and I took all the lands historically held by the Greeks. I've mastered Diplomacy in the game, though it took some adapting to v1.5's more difficult Diplomacy. And I learned how to spread the plague to enemy cities.

The Gold Edition I own is a 4 CD set, with a lengthy manual for the vanilla game, a smaller manual introducing the elements of Barabarian Invasion, and a map of the known world, showing the location of each settlement in the game. The new Gold Edition I recently purchased came with 1 DVD. Needless to say, I was disappointed with the lack of manuals and the map I use every time I play. After searching through the contents of the DVD, I found a .pdf of the manual, but no map. Though I bought my friend a brilliant game, I feel that he was cheated out of the best resources the Gold Edition had to offer.

The lack of enclosed manuals with games is a cheap stab at gamers by producers who already treat us as if we're theives, install secret software we can't uninstall (SecuROM) to ensure we're not thieves, and make shorter and less interesting games with better graphics. What good does a .pdf manual do if we can't read it while gaming? The same question applies to Online manuals and maps. We continue to pay full price for games, yet the content enclosed becomes little more than a DVD and a URL to the game manual. Because Activision is too cheap to enclose the necessary accessories to this game, which were enlosed in earlier releases, I am giving this product an average score. The game itself is a 5/5 and has yet to be bested, and I'm looking forward to Rome II: Total War.
Read more
2 people found this helpful
Helpful
Comment Report abuse

JEB
5.0 out of 5 stars Great battle simulation game!
Reviewed in the United States on March 28, 2011
Platform: PC DownloadVerified Purchase
My son, age 10, loves to play medieval battle simulation games. He enjoys all of the Stronghold series, Settlers series, Age of Empires and so forth. So when he came home from school one day commenting about Rome: Total War and how he could command thousands of troops - very different from the other games that only allow hundreds :) - I told him that he had to wait for his birthday or do chores around the house to earn the money to buy it. Well, he searched for it on Amazon and found it for download at $3.99! WOW, what a bargain. So, we bought it and he cleaned up his room and the livingroom.

I was a bit concerned about the PC configuration since he doesn't have a dedicated video card, but the game worked just fine. Also, we had no problems at all with the installation, unlike some reviews that I read on the internet. Within 10 minutes he was up and playing. Here's his computer's configuration:

Allen Patterson
5.0 out of 5 stars Rome Total War
Reviewed in Canada on April 9, 2013
Platform: PCVerified Purchase
It is a fantastic game the graphics are amazing and you can zoom right into the action. My son loves playing this game and thought that since Dad had never played it before he would be able to kick some butt. However in the first game I ever played I wiped the battle field with him. You have to pay attention to the units and factions but it is alot of fun. Runs no problem on a laptop and windows 8
Read more
3 people found this helpful
Report abuse