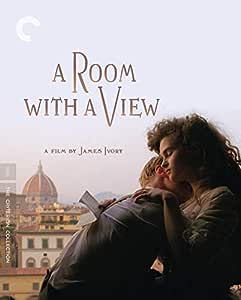 A Room with a View [Blu-ray]

4.8 out of 5 stars
4.8 out of 5
163 global ratings
How are ratings calculated?
To calculate the overall star rating and percentage breakdown by star, we don’t use a simple average. Instead, our system considers things like how recent a review is and if the reviewer bought the item on Amazon. It also analyzes reviews to verify trustworthiness.
Top reviews

Evigan
5.0 out of 5 stars Just as charming as ever!
Reviewed in the United States on March 21, 2019
Verified Purchase
This was a go-to moving for me and my friends in college, I couldn't count how many times I've seen it. Decided I should have it for nostalgia and am happy to say it's kept its rewatchable nature intact, even through all the years. Highly recommend for anyone who likes period pieces, this should be considered a classic of our time.
Read more
9 people found this helpful
Helpful
Comment Report abuse

Sprari
3.0 out of 5 stars Disappointing
Reviewed in the United States on April 26, 2020
Verified Purchase
Despite beautiful scenery, sets, costumes and the pleasant English accent, the film seemed much ado about very little. The plot lacked something engaging, such as tension, suspense or surprise. From early on in the story it was too easy to predict the final outcome.
Read more
2 people found this helpful
Helpful
Comment Report abuse

Amazon Customer
3.0 out of 5 stars Service great; product quality poor!
Reviewed in the United States on September 6, 2020
Verified Purchase
The shipment shipped really quickly. It arrived two days later than promised due to postal service being slow. The quality of the dvd was not what I have come to expect from Criterion Collection. The image transfer was grainy and, at times, washed out, to the point that I stopped watching. The earlier release which I replaced (it started freezing up at the same spot each time I played) was much better. I must learn to pay attention to previous reviews which warn of problems!
Read more
2 people found this helpful
Helpful
Comment Report abuse

Masaka
5.0 out of 5 stars Can't lose with this one
Reviewed in the United States on September 21, 2017
Verified Purchase
this is just plain period entertainment at its best. I've watched this movie a dozen times and never get tired of it. GREAT casting, GREAT scenery, GREAT story. Timeless and classic.
Read more
6 people found this helpful
Helpful
Comment Report abuse

APC Reviews
5.0 out of 5 stars A beautiful 4K restoration of RWAV. This is the version to have.
Reviewed in the United States on October 29, 2015
Verified Purchase
I have watched "Room With A View" countless times over the years, on tape, DVD, cable, streaming, Blu-Ray. This new 4K restoration of the film gives amazing new life to the image quality. Like many recent 4K restorations it is not just a matter of added pixels and resolution but also of the added luminance and nuance that the expanded color space of the 4K standard adds, even if the image is being displayed in an 8-bit medium. Some sections of the film have a very slight flicker. This is caused by unequal fading of color in the original negative for the film due to an error at the lab with fixing the image at the time the negative was originally processed. The effect has been minimized as much as possible but was impossible to eliminate completely. Still, the benefits of the new higher resolution scan far outweigh a minor flaw that only appears in a few scenes. There's no need to go over details of the film itself. Almost anyone who wants it probably already knows it well. The added new supplemental interview feature with some of the cast members recalling the production is delightful. No matter how many times you have seen the film, or whatever other copies you may own, this is the one to have. RECOMMENDED.
Read more
11 people found this helpful
Helpful
Comment Report abuse

Amazon Customer
5.0 out of 5 stars A superlative presentation of a romantic story.
Reviewed in the United States on February 18, 2018
Verified Purchase
There are several versions of this story available but this one has Maggie Smith. The music and scenic photography are also wonderful.The acting holds your attention as the romance unfolds. You will watch it more than once and share it with those you love.
Read more
4 people found this helpful
Helpful
Comment Report abuse
See all reviews

William Griffiths
5.0 out of 5 stars Love this movie/
Reviewed in Canada on April 18, 2016
Verified Purchase
Love this movie/. Excellent characters and actors playing out beautifully the substance of this novel. The older English actors are charmingly portrayed. Scenery and travels are fabulous. No lull in the pace of developments, places visited, interrelationships - so wonderful to see this great film WITHOUT interruptiveTV COMMERCIALS! Great entertainment
Read more
One person found this helpful
Report abuse

Stephanie Kostiuk
5.0 out of 5 stars What can be better then the splendor of 'A Room With a View' on Blu Ray?
Reviewed in Canada on October 20, 2015
Verified Purchase
One of my all time favorite movies!! the cast is outstanding with some of the best British actors ever and the chance to see greats like Daniel Day Lewis and Helena Bonham Carter at the beginning of their careers. Also you get Judi Dench and Maggie Smith together which is always superb. This is filmed beautifully with the Florence never looking lovelier or more romantic. I first saw this film when I was in my early teens and it has always stayed with me. I got the 2 disc special addition dvd for Christmas about ten years ago but always wanted to add a blu ray copy to my collection. I was ecstatic when I found out the criterion collection was releasing this on blu ray and knew I had to have it!! A must to any dvd collector who enjoys period films.
Read more
2 people found this helpful
Report abuse

Lady Listera
5.0 out of 5 stars Beautiful clear DVD copy of Room With a View
Reviewed in Canada on February 3, 2016
Verified Purchase
The classic film from 1983, with Helena Bonham Carter, Julian Sands, and Maggie Smith. Watching it for the second time, I was amazed at how closely the screenplay by Ruth Prawer Jhabval follows the E.M.Forster novel, also amazing was how young the actors looked. A great movie!
Read more
One person found this helpful
Report abuse

Heather E.
5.0 out of 5 stars Beautiful new edition
Reviewed in Canada on August 5, 2020
Verified Purchase
A beautiful edition. DVD Including guide inside
Classic film. Worth rewatching and owning.

Lawrence Uhlin, Novelist
5.0 out of 5 stars Great movie!
Reviewed in Canada on September 17, 2020
Verified Purchase
Very good quality of disc and delivery (given that covid 19 has slowed down most postal services.
Read more
Report abuse
See all reviews

Page 1 of 1 Start overPage 1 of 1
This shopping feature will continue to load items when the Enter key is pressed. In order to navigate out of this carousel please use your heading shortcut key to navigate to the next or previous heading.
Back
Next
Pages with related products. See and discover other items: judi dench