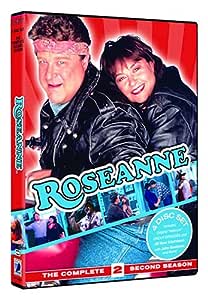 Save with Used - Good
$5.98
FREE Shipping on orders over $25.00 shipped by Amazon.
Arrives: Saturday, Jan 23
Ships from: Amazon
Sold by: Jenson Books Inc

In its prime, Roseanne was the most honest reflection of American life ever shown on television--and also one of the funniest. The second season of this essential sitcom, built around former standup comedian Roseanne Barr, was perhaps its best. The sterling cast--which featured John Goodman (Raising Arizona, Matinee) as Roseanne's husband Dan; Laurie Metcalf (Dear God) as her sister Jackie; and Lecy Goranson, Sara Gilbert, and Michael Fishman as Becky, Darlene, and D.J., her three kids--were confident and eagerly stretching themselves. The writers (including Joss Whedon, later to create Buffy the Vampire Slayer and Firefly) knew how to write smart but credible dialogue and stories; in one episode, Darlene writes a poem that sounds exactly like a 13 year old girl's poetry, yet squeezes your heart. Watch almost any other sitcom and then watch Roseanne; it's startling how much more natural Roseanne feels.

In the season opener, Becky passes gas in front her classmates at school; but that in itself isn't half as funny as the glee that Darlene takes in describing the event--the kind of viciousness that only real families can cultivate. That's the key to Roseanne's success: The utter believability of the relationships. Dan and Roseanne are a loving couple, but their affection works because their fights are just as potent as their flirting. The relationship between Roseanne and Jackie became particularly strong in this season, as Roseanne fought against Jackie's desire to become a cop and meddled in her relationship with her short-lived fiance Gary (Brian Kerwin); Roseanne and Metcalf developed an interplay that could be caring, playful, and bitterly jealous--and sometimes all three at once. The daily urge of parents to both coddle and strangle their kids was thoroughly explored, as was the fusion of need and contempt children feel for their parents. There is one misstep: A dream episode in which Roseanne goes on trial smacks of star ego in a way the show is normally careful to avoid--and makes clear how sharp the other episodes are. The extras are paltry, but this isn't a collection you get for the frills; the show itself lives up to its reputation. --Bret Fetzer

4.8 out of 5 stars
4.8 out of 5
300 global ratings
How are ratings calculated?
To calculate the overall star rating and percentage breakdown by star, we don’t use a simple average. Instead, our system considers things like how recent a review is and if the reviewer bought the item on Amazon. It also analyzes reviews to verify trustworthiness.

felicia crabb
3.0 out of 5 stars Cheaper for a reason
Reviewed in the United States on April 25, 2015
Verified Purchase
I bought this and season 5 to complete my series. The packaging of the individual discs is cheap and disappointing. I have lots of frustration with the discs freezing or playing with no audio which never happens on the Anchor bay sets I have of the other 7 seasons.
One up note is each episode has more chapters. I use these as my "bedtime stories" so finding where I dosed off is easier...when it doesn't freeze.
I will probably get the other version of these 2 seasons at some point due to the freezing.

Aidan
4.0 out of 5 stars Love the show, but cheap packaging!
Reviewed in the United States on February 11, 2014
Verified Purchase
This would have gotten five stars if it weren't for the packaging. I love Roseanne, and since Millcreek took over they have the full, uncut episodes, which is fantastic.

But the packaging! Horrible! This isn't a snap-in DVD case like every other DVD case on the planet. It's pretty much just a plastic box made to look like a DVD case. The DVDs are held in flimsy paper sleeves which are set in the case. But you get what you pay for and that explains why they can sell 3-disc sets for such a low price.

steven Carter
5.0 out of 5 stars check the running time...
Reviewed in the United States on December 18, 2005
Verified Purchase
when i saw Roseanne season two on the shelf with it's little sticker announcing that the episodes were the uncut "Network" versions i was so happy- as one who "whined" about the cut season one dvd i felt almost proud- like we had been heard then I, ever vigilant devided the running time by 24- the number of episodes they say are in the season two dvd box set and came up with an average of 22 minutes- not 24 which was the average leangth of the "network" versions! is it a mistake? did they originaly design the packaging with the syndicated/cut episode running times and not change the packaging instead opting for a cheaper sticker to provide that information or did they just stick it on the same syndicated/cut version of season two they were going to release anyway?
I guess i'll find out if i buy season two and compare the episedes to the original network versions i have.
Just trying to give people a warning unless the studio's are up to their usual cheap tricks. If so Roseanne deserves better, if not re-release season one in the uncut versions and all will be forgiven Carsey/Werner.
(...)
Read more
5 people found this helpful
Helpful
Report abuse

sara
5.0 out of 5 stars Perfect Condition
Reviewed in the United States on September 26, 2018
Verified Purchase
One of my favorite older TV series is Roseanne. The DVD set came in perfect condition and I have really enjoyed watching it.
Read more
One person found this helpful
Helpful
Report abuse

Mr. M. Balde
5.0 out of 5 stars roseanne : season 2 , and is just the start of one of the best tv shown ever !!!
Reviewed in the United Kingdom on August 3, 2013
Verified Purchase
l am so glad to have this version of roseanne season 2 , this is the only version you must own ! all the episodes are totaly uncut , the way is was mean to be . and its writting in the middle of the front cover in case you are in doubt !!! from the moment the first episode start , you know you are ready for a treat ! all the way until the last episode ! if you don t have this tv show , you don t know what are you missing ! a must have , a classic !!!
Read more
2 people found this helpful
Report abuse

Amazon Customer
5.0 out of 5 stars love it thankyou
Reviewed in Canada on January 9, 2021
Verified Purchase
it's here and on time. what more could a person want. thankyou!
Read more
Report abuse