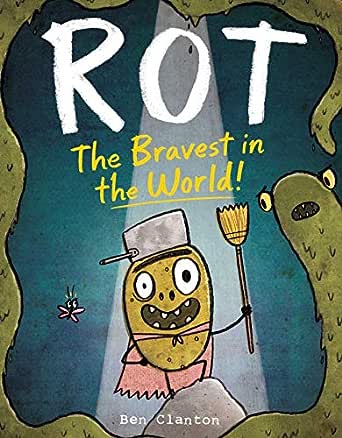 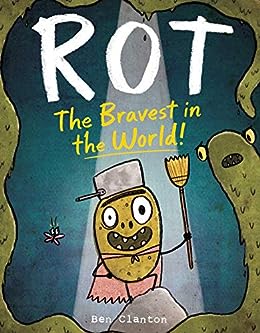 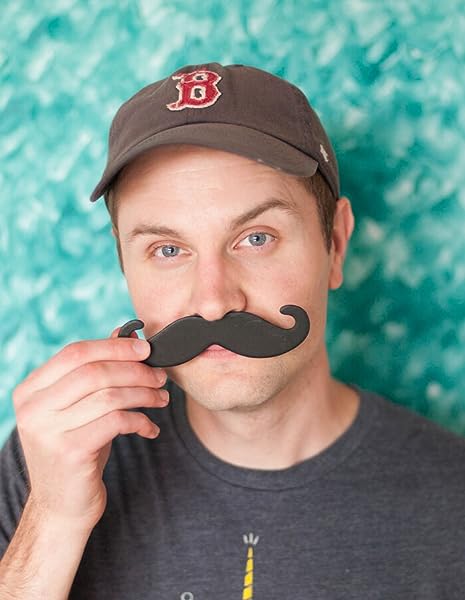 Rot, the Bravest in the World! Kindle Edition

Ben Clanton is an author and illustrator whose books include It Came in the Mail; Something Extraordinary; Rex Wrecks It!; Mo’s Mustache; The Table Sets Itself; Vote for Me!; Rot, the Cutest in the World; and Rot, the Bravest in the World. He lives with his wife and son in Seattle, Washington. Learn more at BenClanton.com. --This text refers to an alternate kindle_edition edition.

4.8 out of 5 stars
4.8 out of 5
43 global ratings
How are ratings calculated?
To calculate the overall star rating and percentage breakdown by star, we don’t use a simple average. Instead, our system considers things like how recent a review is and if the reviewer bought the item on Amazon. It also analyzes reviews to verify trustworthiness.

Tomas Milo
5.0 out of 5 stars Amazing! Just like all his other books!
Reviewed in the United States on June 17, 2020
Verified Purchase
I had very high hopes for this book. I’m a huge fan of Rot! I have a Rot themed section of my classroom with Rot artwork and a crocheted Rot that a parent made for me. So I thrilled that this book was everything I had hoped for, though I wasn’t worried because Ben Clanton hasn’t disappointed me, yet. He writes engaging stories with great dialogue and develops complex characters throughout his books. It has a good message on self-confidence, believing in yourself and being brave. It’s also one of those books that is a fun read aloud for kids and adults.

What I’m looking forward to for this next school year is doing an author study on Ben Clanton with my 2nd grade class. Between Rot and his Narwhal and Jelly series, he has developed a distinct style and voice that would be fun for kids to analyze. I like how this book has a very similar structure on how the story progresses, but it’s still a completely different story. My recommendation is to buy it, and if you don’t have his other books, get them too!

Heather N Saito
5.0 out of 5 stars Another hit!
Reviewed in the United States on November 22, 2020
Verified Purchase
My daughter loves the narwhal books and the first Rot.. she was so excited to get this book! Cute, funny, and enjoyed by the whole family.
Read more
Helpful
Comment Report abuse

Steve Berg
4.0 out of 5 stars Rot never disappoints, we hope for another from Ben Clanton!
Reviewed in the United States on July 21, 2020
Verified Purchase
Almost as good as the first one, my 5 yo daughter still loves this one and we have read it many times, she absolutely loves Rot. Teaching you something you were once scared of might actually be something you'll love if you try.
Read more
Helpful
Comment Report abuse

Tonja Drecker
VINE VOICE
5.0 out of 5 stars Loved this one!
Reviewed in the United States on June 18, 2020
Whoever thought potatoes wouldn't make great picture book heroes never met Rot and joined him on an attempt to overcome the Squirm.

Rot's life is great, especially when it includes mud. Nothing is better than mud—the way it squishes between the toes...fills the nose. And there's absolutely nothing ever, ever better than jumping into a big pool of mud, except when a Squirm might be lurking underneath the surface. But Rot won't give up that easily. Somehow, he has to make himself super brave. If that's possible.

I'll admit, the idea of a potato named Rot as the main character of a picture book had me wondering, but this shadow of doubt was totally unnecessary. The author builds a fun, somewhat quirky and totally wonderful world around potatoes, and in this case, their love for mud. The first pages allow the reader to even find a sense of familiarity and connect with the potatoes as they spend time together, picnic, and enjoy...well, mud. Rot continues into the adventure with a wonderful naturalness, which will have young listeners wishing they could be his friend. He's that easy to relate to, despite all of the weird differences.

As a read aloud, this book is simply fun. Not only will the illustrations catch listeners' attentions, but the tale itself is written with emotion—silly and yet, sometimes serious—mixed in. The text flows in various fonts, allowing varying voice fluctuations to slide right in. It's never boring, flows by quickly, and will have listeners laughing as well as concerned for Rot as he tries his best to overcome his fears.

And, to top it off, there are several good messages in these pages that kids can sympathize with. First, Rot does his best to not let his own fears beat him. It's not easy, but he doesn't give up. Second, there's a little bit of teasing/bullying and Rot deals with this very well. And this second one rolls right into the third, which involves sibling relationships. Anyone who has an older (or maybe younger) sibling who likes to tease them (or a neighbor...or a cousin) will instantly understand what Rot is going through and root for him until the end.

Summed up, the first appearance of this one hits quirky and odd, but it works. I can recommend this one.

I received an ARC copy and was surprised at how much we liked it.

Kayla
TOP 1000 REVIEWER
5.0 out of 5 stars Super cute and full of good messages!
Reviewed in the United States on October 1, 2020
We stumbled upon this book at our local library and it’s become one of my 4-year-old son’s favorite books! The story is silly and fun and relatable, especially to kids with siblings who experience gentle teasing. The character, Rot, displays bravery and courage, overcoming his fears of the ‘squirm’ and showing his older brother that he can, in fact, be the bravest in the world. The dialogue throughout the book is fun and engaging and really kept the attention of all three of my kids – ages 4, 5, and 7. Overall, I would absolutely recommend this book to others. It’s cute and fun and full of great messages! I’m including a few photos of some sample pages just to provide a closer look at what to expect from the book. Hope that helps!
Read more

LibraryMom
5.0 out of 5 stars A New Favorite!
Reviewed in the United States on July 21, 2020
Oh, how my family loves a good funny book and, boy, does Ben Clanton know how to deliver. ROT: THE BRAVEST IN THE WORLD stars a mud-loving potato whose sneaky brother tricks him into believing there is a monster called a “squirm” in their new favorite mudhole. Rot does his best to overcome his fear by imagining himself as someone brave and dresses up in costume to help face the “squirm”.

This quirky tale is witty, hilarious, and full of heart!

Thank you to the publisher for sharing this book with our family in exchange for an honest review.
Read more
Helpful
Comment Report abuse
See all reviews