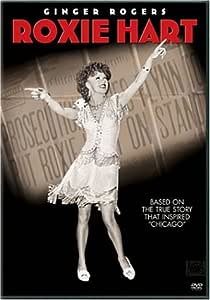 Add to Cart
$32.99
+ Free Shipping
Sold by: ACHILLES' REEL
Have one to sell?
Sell on Amazon

After her husband shoots a burglar in their apartment, Roxie Hart (Ginger Rogers) is talked into pretending she did it by a newsman and a theatrical agent who promise to sign her for a vaudeville tour. Realizing she'll become a household name overnight, Roxie agrees and becomes the center of an outrageous trial.

4.6 out of 5 stars
4.6 out of 5
73 global ratings
How are ratings calculated?
To calculate the overall star rating and percentage breakdown by star, we don’t use a simple average. Instead, our system considers things like how recent a review is and if the reviewer bought the item on Amazon. It also analyzes reviews to verify trustworthiness.
Top reviews

Calicokid
4.0 out of 5 stars GINGER, YES! .... ROXIE, WELL ....
Reviewed in the United States on November 14, 2013
Verified Purchase
The five stars are mainly for the crisp black and white print. In this rather stingy release, we get the movie, two versions of the film's previews and a rather self-serving group of 20th Century Fox movie trailers, although the latter might want to make you see 'Star' if you didn't know more anything more about that dreary offering. But ... back to Roxie, This 1942 is a 'cross-over' version bridges the drama of the DeMille silent film and the recent musical film by giving its star, Ginger Rogers, a couple of chances to kick up her heels a la her work in the series of famous RKO musicals she did with Fred Astaire. In those days, Ginger was known primarily as Fred's partner. It's hard to tell which of the films of the 'saga' of Roxie is closest to the original play, but this film has characters who don't appear in the silent version or the musical version and appear here for the first time. The Film Code (in full force in 1942) required some of the events to be 'cleaned up' and a tacked on an ending that made it all morally decent. The opening scenes firmly place the narration (told in flash back) in the 'roaring twenties' and the actors, for the most part, try to carry it off ... everyone, that is, but Ginger. She is pure 1940s in her make-up and costumes, which makes her 'acting' like a gum-chewing, hip-swinging flapper a bit out of sync with the surroundings. I don't know why, but she always seems to appear much larger than anyone else. Maybe it's the hair. Adolph Menjou, as the attorney, should be the one on trial for grand theft, because he 'steals' all the scenes in which he's involved. A group of able contract players make up the rest of the cast, including Iris Adrian. Too bad she wasn't used more. She might even had made a hot Roxie. To sum up, this is a pleasantly diverting film ... an early memento of William Wellman's directing talents ... wavering uncomfortably between the two other films that tell the same story. If you want more Ginger without Fred, you might try the soaper, 'Kitty Foyle'.
Read more
4 people found this helpful
Helpful
Comment Report abuse

Alternately you can take a deep cleansing breath and enjoy this movie. It is fun.

Plot: This guy gets killed. In this version Roxie Hart (Ginger Rogers) is more or less innocent, but takes the fall in the hopes of turning her notoriety into a dancing career.
As the star of the murder story of the century, or until the next murder of the century, she quickly becomes the sweetheart of the prison and the darling of the press. There is a parallel story about Homer Howard (George Montgomery) the one reporter who digs out the real story and tells it as flashback but mostly his character is a drag on everything. His foil is cynical and senior reporter Jake Callahan (Lynne Overman). Jake gets to say all the things we wish we were smart enough to have said.

Amos Hart (George Chandler) the disposable husband sells everything to get the great and even more cynical lawyer Billy Flynn (Adolphe Menjou) as Roxie's defense lawyer.

What follows is a classic media and court room circus. Remember this is a 1942 movie. I do mean Classic.

If you have only seen Ginger Rogers as a sophisticated actress and brilliant dancer, her Roxie Hart will give you an entirely new appreciation for her acting chops. Her every gum chewing, cheaply coiffed (deliberately low class hair style) close up and her hardly sly efforts to show some leg add to the comic proportions of this movie. Overall, it is not fair to compare the most recent musical Chicago to this movie, but the short tap dance on the stairs by Miss Rogers is at once more eloquent and better for its movie than the over choreographed limp "I Cant Do it Alone" serves in the newer productions.

Adolphe Menjou's is a brilliant Billy Flynn. He plays the slimy lawyer straight, but with nice small comic flourishes and grand movie lawyer gestures. Younger views may pick up that this Flynn is the model for Futurama's Hyper Chicken lawyer.

If you want the history behind this inter-generational, multi-media "based on a true story" story , read:

The Girls of Murder City: Fame, Lust, and the Beautiful Killers who Inspired Chicago

If you want a funny, entertainment - "the way they used to make them", get and watch Roxie Hart.
Read more
8 people found this helpful
Helpful
Comment Report abuse

Fernando Silva
5.0 out of 5 stars Ginger Rogers is simply great!
Reviewed in the United States on August 21, 2004
Verified Purchase
We all know about the 2002 Academy Award Winning Musical "Chicago", starring Catherine Zeta-Jones, Richard Gere and Renée Zellweger, but not too many people knew that this story had been filmed before as plain comedy in 1942.

Ginger Rogers does an excellent job portraying the rather vulgar & low-brow, but very appealing Roxie Hart, who is being judged for shooting a man, something she, in fact, didn't do...but, which oddly enough, she must pretend she did, in order to gain public notoriety & "stardom", in the late `20s Chicago!

She has to convince a Jury (integrated by men-only) to acquit her not-guilty, the poor young thing! (Rogers), helpless, shy, "demure", ...she just had to fight for "her honor"....and in the process she (hilariously) displays (in front of the Jury) many-a-smile and lots of "legs" (and batting eyelashes too!), to obtain it!!

Adolphe Menjou is excellent as her attorney, the "best in town", guiding her through all kind of schemes to gain both the acquittal and the press-coverage she so desperately needs to show "her talents" and become a "public name"...BTW, you have to watch Rogers dance the blackbottom!

George Montgomery is good as a young reporter who falls for Roxie, and the rest of the cast is filled with great character actors like Lynne Overman, Nigel Bruce, Spring Byington, William Frawley, Sara Allgood, Phil Silvers,...all of whom give expert and flawless performances.

The story was filmed before as a silent in 1927, as "Chicago", with Phyllis Haver as Roxie Hart.

Susie
5.0 out of 5 stars The Knees Roxy!
Reviewed in the United Kingdom on September 26, 2011
Verified Purchase
This is a brilliant film - based on same plot as "Chicago" but with very little musical content. Everyone in it is superb- Ginger Rogers, Adolphe Menjou and (a pre-Bilko) Phil Silvers deserve a special mention though.
I first watched it in the 1970s with a friend and we were expecting very little but ended up laughing out loud at the clever script and excellent delivery. I've most recently watched it with my partner, who despairs at times of my love for old black & white films but loved this - he thought it much better than Chicago.
Read more
One person found this helpful
Report abuse

R. Poole
4.0 out of 5 stars who needs music?
Reviewed in the United Kingdom on November 11, 2009
Verified Purchase
this original (from which chicago is based )is by far the better movie albeit not a musical and in glorious b/w.the humour is ripe ,ginger even does a little black bottom number and her comedy timing is spot on.as a publicity seeking showgirl stopping at nothing to get famous ,even to admitting to a murder she didn't commit and adding more and more to her "story" to sell more papers this is very,very funny.well worth a look.
Read more
4 people found this helpful
Report abuse

barbaresc
5.0 out of 5 stars ginger is trumps!
Reviewed in the United Kingdom on January 22, 2013
Verified Purchase
show me a modern actress who has even half the range of ginger rogers.she was an excellent comic,a belieavably serious actress,a modern woman with both feet on the ground,and an exquisitely elegant dancer.that came about only by having been given these gifts by birth but also by her immense willpower to achieve by hard work what is best.for her,her art and the public.we will never see the likes again.watch this film and you know what i want to say!
Read more
Report abuse

Mr. E. A. Dobson
5.0 out of 5 stars Not seen Chicago but this is great!
Reviewed in the United Kingdom on February 8, 2015
Verified Purchase
I watched this more for Ginger Rogers than anything else. Apparently her character is the basis for Broadway hit Chicago or maybe it's based on this film. I really enjoyed it but it's not a musical for anyone who presumes it is. Great fun!
Read more
One person found this helpful
Report abuse

Amazon Customer
5.0 out of 5 stars Hilarious
Reviewed in the United Kingdom on March 3, 2019
Verified Purchase
Following recent purchases of Ginger Rogers dvd's, in my opinion, I'm convinced that Ginger Rogers was probably the greatest actress ever! Eat your heart out Meryl Streep!!
Read more
Report abuse
See all reviews

Page 1 of 1 Start overPage 1 of 1
This shopping feature will continue to load items when the Enter key is pressed. In order to navigate out of this carousel please use your heading shortcut key to navigate to the next or previous heading.
Back
Next
Pages with related products. See and discover other items: ginger rogers movies