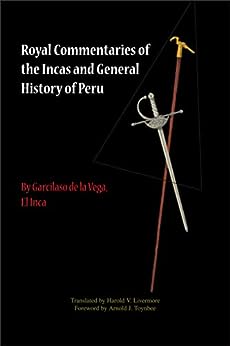 Royal Commentaries of the Incas and General History of Peru, Parts One and Two Kindle Edition

The two-part classic history of the Incan empire’s origin and growth, as well as their demise following the arrival of the Spaniards.

Garcilaso de la Vega, the first native of the New World to attain importance as a writer in the Old, was born in Cuzco in 1539, the illegitimate son of a Spanish cavalier and an Inca princess. Although he was educated as a gentleman of Spain and won an important place in Spanish letters, Garcilaso was fiercely proud of his Indian ancestry and wrote under the name EI Inca.

Royal Commentaries of the Incas is the account of the origin, growth, and destruction of the Inca empire, from its legendary birth until the death in 1572 of its last independent ruler. For the material in Part One of Royal Commentaries—the history of the Inca civilization prior to the arrival of the Spaniards—Garcilaso drew upon “what I often heard as a child from the lips of my mother and her brothers and uncles and other elders . . . [of] the origin of the Inca kings, their greatness, the grandeur of their empire, their deeds and conquests, their government in peace and war, and the laws they ordained so greatly to the advantage of their vassals.”

The conventionalized and formal history of an oral tradition, Royal Commentaries describes the gradual imposition of order and civilization upon a primitive and barbaric world. To this Garcilaso adds facts about the geography and the flora and fauna of the land; the folk practices, religion, and superstitions; the agricultural and the architectural and engineering achievements of the people; and a variety of other information drawn from his rich store of traditional knowledge, personal observation, or speculative philosophy.

Important though it is as history, Garcilaso’s classic is much more: it is also a work of art. Its gracious and graceful style, skillfully translated by Harold V. Livermore, succeeds in bringing to life for the reader a genuine work of literature.
Read more
Previous page
Next page
Due to its large file size, this book may take longer to download

This book is the account of the origin, growth, and destruction of the Inca empire, from its legendary birth until the death in 1572 of its last independent ruler. The author's classic is a work of art. Its gracious and grateful style, skillfully translated by Harold V. Livermore, succeeds in bringing to life for the reader a genuine work of literature. --This text refers to an out of print or unavailable edition of this title.

Wendy Phillips, son Rob(reviewing own gifts, occasional purchase, etc.)
4.0 out of 5 stars Very interesting account
Reviewed in the United States 🇺🇸 on July 18, 2022
Verified Purchase
This is an interesting work and a useful resource(insomuch as I assume it is essentially true to the account given by Garsilaso de la Vega). I would caution the reader I believe the author has sort of a 'thing' for the sun worship of his predecessors, and, like being a health nut/exercise fanatic, I suppose that's a personal aesthetic choice, I consider it a subset of a higher truth...and I'm just caution-ing a reader if they read thru 500+ pages of this unwittingly, they may be subtly influenced without intending this. Otherwise, the comparison with the Inca and Roman civilizations, and(perhaps a touch of confucian, tao, shinto) and his accounts of things are interesting, and ordering a new copy(..it might be worth it to make more available) might be reasonable.
Read more
Helpful
Report abuse

HarryC
5.0 out of 5 stars everything you ever wanted to know about the Incan Empire
Reviewed in the United States 🇺🇸 on April 15, 2013
Verified Purchase
this book was written by Garcilaso de la Vega back in the 1600's !!!!! and is an incredible insight to the Inkan Empire. If nothing else, just read it because it is an old book full of wonderous history over 400 years ago!
Read more
One person found this helpful
Helpful
Report abuse

Anthony O. Miller
5.0 out of 5 stars Inca History Must Read
Reviewed in the United States 🇺🇸 on February 14, 2009
Garcilaso de la Vega's recollections of pre-Hispanic Peru (and Bolivia) are perhaps the most important in any language. Known as "El Inca," De La Vega was of two bloods -- the illegitimate son of a Spanish conquistador and an Inca princess. He was born in the Incan capital of Cuzco, Peru, and steeped in both traditions. So his accounts of what life was like before The Conquest of the Queshua-speaking people of Peru and Bolivia are the closest to what it truly was like before the illiterate son of a pig farmer, Francisco Pizarro, and a handfull of armored and horsed Spanish adventurers exploited multiple coincidences to "conquer" the so-called Inca empire. These variables included the unrest in the Incan empire after Atahualpa, the last "Inca" (name of the "Son of the Sun" -- the king) defeated his brother, Huascar, for the kingship; and the facts that the Queshua-speaking people of Peru and Bolivia (misnomered as: The Inca) had never seen horses, had no firearms and were expecting the return of a white, bearded god named "Viracocha" -- who they took Pizarro to be. Curiously the Aztec of Mexico were defeated a few years earlier because of a similar "white bearded god" myth -- the Aztec thought Hernan Cortes was Quetzalcoatl, their name for the "white bearded god" who had promised to return to the people of Mexico hundreds of years before The Conquest by Cortes.

The marvels of the organization of most of South America under the "Inca" empire are wonderfully illustrated by De La Vega in his "Royal Commentaries." Life as he "remembers" it before Pizarro (since he was born just after the conquest) comes alive under the pen of "El Inca" as under no other historian. De la Vega gives life to this great story of the clash of empires and cultures that is on a level with the epic conquests of Alexander the Great, Genghis Khan, the Romans and the early Muslims. "The Royal Commentaries" is a must-read for anyone fascinated (as I am) with life in South America before the Spanish stumbled into The New World in search of gold and souls.
Read more
12 people found this helpful
Helpful
Report abuse

Amazon Customer
5.0 out of 5 stars This book is an actual testimony
Reviewed in the United States 🇺🇸 on January 17, 2004
I'm very impressed reading his work and how he gives in full detail about the spanish inquisition. Although this book covers the not so flattering side of the spanish conquest in Peru, we finally get a glimpse on how a mestizo (his parents were incan and spanish royals) got the best of both worlds with all sincerity. It's really uncensored on the real life events at the time... really a must read. There should be a movie about this!
Read more
One person found this helpful
Helpful
Report abuse
See all reviews
Report an issue
Does this item contain inappropriate content?
Report
Do you believe that this item violates a copyright?
Report
Does this item contain quality or formatting issues?
Report