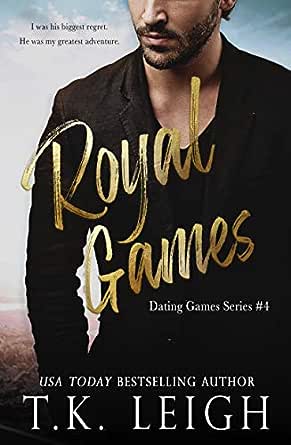 You've subscribed to Dating Games! We will preorder your items within 24 hours of when they become available. When new books are released, we'll charge your default payment method for the lowest price available during the pre-order period.
Update your device or payment method, cancel individual pre-orders or your subscription at
Your Memberships & Subscriptions
There was an error. We were unable to process your subscription due to an error. Please refresh and try again. 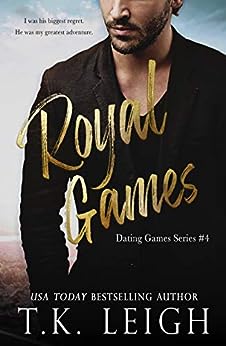 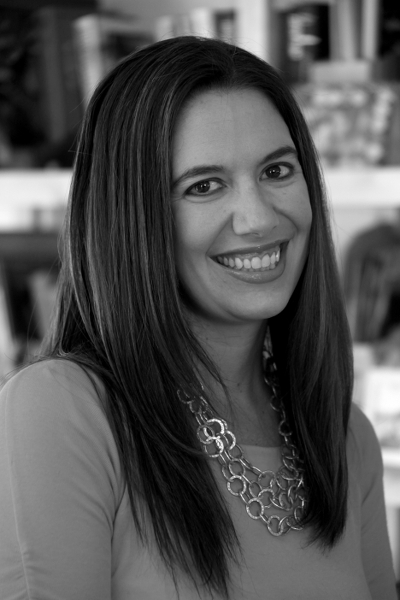 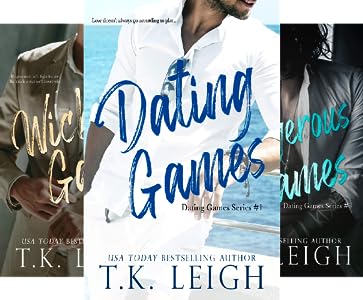 "T.K. Leigh has outdone herself with this royal romance taking you on a heartwarming journey where dreams are crushed, hearts are broken, and secrets revealed creating an unforgettable fairy tale with a perfect happily ever after." - Author Cary Hart

"This is a stunning story of finding love when you least expect it while on an epic ride of self discovery. The wit and banter between these two is priceless and the chemistry is sizzling." - Southern Vixens Book Obsessions

"Angsty drama, characters packed with wittiness and intelligence, and chemistry that's just off the charts... this book was absolute perfection for me!" ~ We Like Them Dark Blog

"Some books entertain you, some make you cry, some make you think, some stay with you long after you finish...  and the rare few do all these things.  Royal Games is one of those rare few." - Words We Love By

"The tears will easily flow with this beautiful story with two broken people that clearly deserved their HEA. Simply beautiful!!" - Tania's Book Blog

"This book is every girl's fantasy of dating a prince!" - Pretty Book Wh*re

"Not just all the feels but all the tears!" - Goodreads Reviewer

"This story was more than I expected and everything my soul needed!" - Words We Love By

"I've never felt so much while reading one book." - My Book Angel

"True to TK's writing she has you laughing, crying, wanting to throw you book or kindle and then just rooting for these two broken people to finally get their happily ever after." - Goodreads Reviewer

"Oh this book!! Seriously!! I have read this whole series and this one tops them all. Yes it's a romance but it is so much more that that; it is literally a life adventure." - Goodreads Reviewer

"I really wasn't expecting this book to be so emotional but damn it hit me in the feels!" - Goodreads Reviewer

4.8 out of 5 stars
4.8 out of 5
166 global ratings
How are ratings calculated?
To calculate the overall star rating and percentage breakdown by star, we don’t use a simple average. Instead, our system considers things like how recent a review is and if the reviewer bought the item on Amazon. It also analyzes reviews to verify trustworthiness.

Wendy LeGrand
5.0 out of 5 stars I loved traveling Route 66 with Nora and Anderson!
Reviewed in the United States on June 9, 2020
Verified Purchase
Wow, oh wow!! Reading Nora's story is both emotional and bittersweet! Her book is the last of the four friends we've met in the Dating Games series and I was both excited but hesitant to read it. Excited because we've gotten to see little pieces of Nora along the way and I couldn't wait to get her full story, but hesitant because once I read it, I knew the series would be coming to an end. T.K. as usual delivers a story full of depth and emotion that had me glued to the pages.

Nora is freshly divorced after walking in on her husband with another man. Her three friends throw her a party to celebrate and end up talking her into taking a Divor-cation. She decides she's going to travel historic Route 66, something she had planned to do with her fiancé, Hunter, six years ago before he was tragically killed in a car accident. On the first day of her trip, she runs into a gorgeous man with a British accent, and then again the next day. Is this fate? Or just coincidence? What forces are at play here?

I truly loved Anderson. My heart went out to him after learning about his past and the events that led up to his traveling the Route 66 path as well. Still reeling from a tragedy in his past, along with some recent life changing news, AND the pressures of being next in line to the throne, he needs this time away to reflect and recoup and figure out what he wants for his future. Running into Nora seemed to be serendipitous as he felt a pull to her that he hasn't felt in a very long time.

I absolutely loved going on this road trip with Nora and Anderson. T.K. has this way when she writes that pulls me into the story and I felt like I was living vicariously through the adventures these two had along the way. Even though they only spend a few weeks together traveling Route 66, the feelings and draw to each other are strong and undeniable.

Both Nora and Anderson had deep seated emotional issues they needed to work through, all the while developing feelings for each other. The buildup to them exploring their feelings was a delicious slow burn and I couldn't wait to see how explosive these two would be together. T.K. knows how to write a highly sensual sex scene and the chemistry between these two was off the charts!

I was rooting so hard for Nora and Anderson to finally be able to put their pasts behind them and forge a path forward together, but that sneaky T.K. had to throw a twist in there that had my heart twisted all up!! What the what? Can these two still find a way to move forward together after revelations come to light? I was constantly holding my breath that last part of the story! It's a doozy!

I am so excited to see that there's going to be a little more of Nora and Anderson coming our way when T.K. releases Tangled Games! I am not ready for their story to be over!
Read more
2 people found this helpful
Helpful
Comment Report abuse

Kadie
5.0 out of 5 stars Love on Route 66! ❤️
Reviewed in the United States on June 9, 2020
Verified Purchase
Royal games is the 5th book in the “Dating Games” series. This time, we learn about Nora’s past & present. We first learn that Nora’s divorce from Jeremy (who admitted he’d cheated on her with another man) has become final, and she once again finds herself alone. Luckily, though, she does have her BFF’s, Chloe, Evie & Izzy, who are a great support system for her. Evie thinks that Nora should go on a “Divor-cation” to just get away for awhile & have some time for herself. It’s Chloe who suggests that Nora drive the length of Route 66, which brings up some painful memories of a trip that Nora never got to take.

About 6 years ago, Nora was happy, 6 months pregnant, and engaged to Hunter, her first true love. They were going to take the trip on Route 66 together when they moved out to California. Those plans came to an abrupt halt when a car accident took all that away from Nora. To this day, she still hasn’t let go of Hunter’s or her daughter Ember’s memory. Finally agreeing with Chloe that it’s time to let her past go, Nora flies out to Chicago to start her trip on the infamous road.

What she finds on this trip is Anderson. Anderson, with his slight British accent, has his own demons that he’s trying to deal with after losing his fiancée unexpectedly and then receiving news that he’s got a disease that could possibly leave him in a wheelchair. He’s been planning on taking this very same trip before going home to deal with his illness as well as his “Princely” duties. While at a diner a few blocks from the beginning of his trip, both he and Nora are sitting at the counter. He notices her immediately and asks her if she’s driving out on Route 66. Startled, she answers him, and they chat for a mere few minutes. She leaves to start her trip, and Anderson does the same.

What happens next is a few “coincidental” meet ups and a pull of attraction they both feel deeply. Their story is so wonderful and sweet, but like most of T.K. Leigh’s books, she throws a wrench into their story (Chapter 23!!!) that I did not see coming. It’s a devastating realization that could destroy them both.

Dianna Little
5.0 out of 5 stars The best book yet in this series
Reviewed in the United States on June 9, 2020
Verified Purchase
Where do I begin? Anderson and Nora's story was everything I hope it to be and so very much more. First up there is Nora. She see's all her friends all getting their happily ever afters and she is not. They are really the only family she has so they persuade her to go on a vacation to try and put her past to rest. A day into the trip she meets this handsome stranger that takes her breath away. Is it fate or something else that she keeps bumping into him? Then you have Anderson who is completely taken with Nora. There is something about her but he can't put his finger on it. They start on an adventure separately but as the story goes things happen that will have you saying where the heck did that come from. True to TK's writing she has you laughing, crying, wanting to throw you book or kindle and then just rooting for these two broken people to finally get their happily ever after. There really are not enough stars for this book it is that good. I can't wait to see what is next for these two. TK you amazed me with this story. Well done!!
Read more
One person found this helpful
Helpful
Comment Report abuse
See all reviews

bosso
5.0 out of 5 stars A must Read
Reviewed in the United Kingdom on August 16, 2020
Verified Purchase
Wow what a book fantastic from start to finish lost of twist and turns which is what i like about a book...cant wait for the next one..thanks T.K.LEIGH brilliant writing
Read more
Report abuse

Kindle Customer
4.0 out of 5 stars Really enjoyed it
Reviewed in the United Kingdom on June 13, 2020
Verified Purchase
Loved this book, Anderson and Nora are good together, loved the twist in the story, wasn't expecting that, can't wait for book 2
Read more
Report abuse
See all reviews