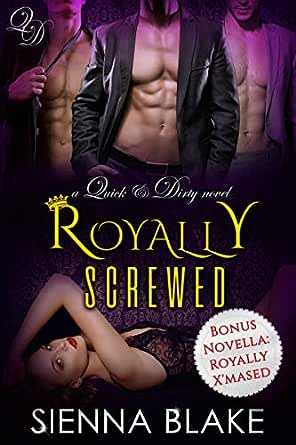 You've subscribed to Quick & Dirty! We will preorder your items within 24 hours of when they become available. When new books are released, we'll charge your default payment method for the lowest price available during the pre-order period.
Update your device or payment method, cancel individual pre-orders or your subscription at
Your Memberships & Subscriptions
There was an error. We were unable to process your subscription due to an error. Please refresh and try again. 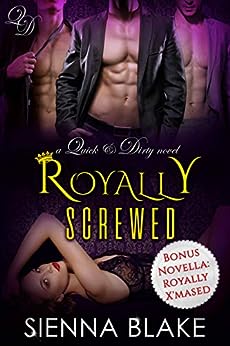 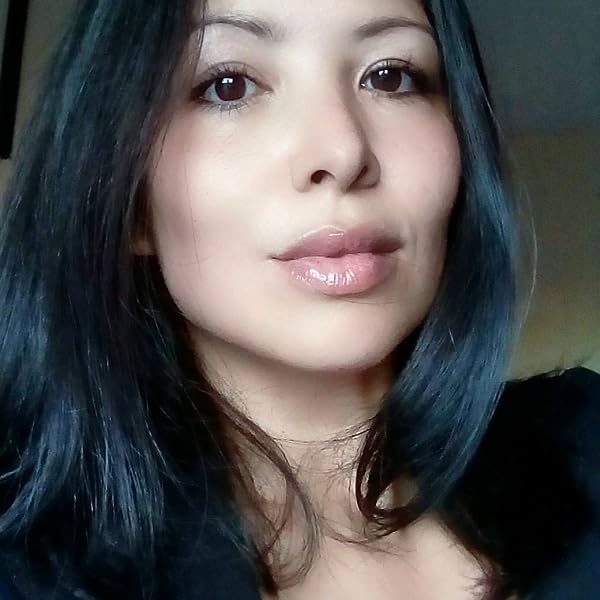 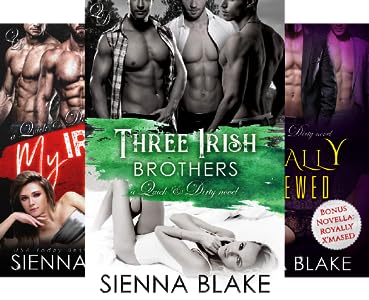 4.5 out of 5 stars
4.5 out of 5
69 customer ratings
How does Amazon calculate star ratings?
Amazon calculates a product’s star ratings based on a machine learned model instead of a raw data average. The model takes into account factors including the age of a rating, whether the ratings are from verified purchasers, and factors that establish reviewer trustworthiness.
Top Reviews

Sarah Arndt
3.0 out of 5 stars Great forbidden romance, not-so-great reverse harem.
Reviewed in the United States on December 12, 2018
Verified Purchase
I’m finding myself quite obsessed with these Quick and Dirty novellas from Sienna Blake. This novella wasn’t quite as emotionally riveting as the previous two, but it packed a lot of punch in other ways. I love a good forbidden romance, and the relationship between Sophia and Grayson (and Chase and Nicolai) in Royally Screwed was forbidden to the max.

I have a strange relationship with insta-love, sometimes it works for me, and sometimes it doesn’t. The connection between Sophia and Grayson hovered just on the dividing line for me. There were moments I felt their chemistry intensely and other moments where it felt forced. In those scenes where I could feel it, their connection was all consuming. And most of those moments were when they were alone together. I could understand why Grayson had carried out all previous liaisons with Chase and Nicolai because they felt impersonal to me.

As a forbidden romance, Royally Screwed really worked for me. I loved that Sophia challenged him and he was able to see what his life looked like from a different perspective through her. They had a fascinating back and forth when they were together, and I could feel the genuine care and affection they had. I could have spent a lot longer exploring their love story and them finding their own way through a lifestyle that isn’t always receptive to outsiders and commoners.

As a reverse harem novel – of which I have limited experience – Royally Screwed didn’t work for me. I can appreciate the relationship between one woman and multiple men if there is a deep and abiding love between all of the parties, but there wasn’t that connection in this book, so it fell a little flat for me.

My wishes for this book would mostly be in the ties to the Chase and Nicolai. I never felt the draw there between them and Sophia, so a lot of the scenes involving them felt more gratuitous than anything. Based on the original publication of this in the Royal and Reckless anthology, I wonder if this wasn’t the first of these reverse harem books Ms. Blake wrote, because the other two far outshined this one regarding the connections between all the characters. There were also a handful of editorial issues, typos mostly, that need to be cleaned up. I also would have loved to had seen more of Nicolai’s backstory and hope to find out his mysteries sometime in the future.

Royally Screwed is the third book in Sienna Blake’s Quick and Dirty series. These novellas are all complete standalones, with no character or content crossover. Royally Screwed was previously published as part of the Royal and Reckless anthology and has been re-released with a bonus novelette. Royally Screwed is written in triple first-person perspective, narrated by Sophia, Grayson, and Nicolai.
Read more
6 people found this helpful
Helpful
Comment Report abuse

Mary Jo Toth
VINE VOICE
5.0 out of 5 stars Fabulously sexy and captivating menage romance
Reviewed in the United States on December 11, 2018
Verified Purchase
Fabulous menage romance. Sophia has worked hard to prove herself and build a life at the luxury resort. When 3 incredibly sexy men are captured by her beauty, she is surprised and enthralled. Can she agree to the prince’s request to have a sexy fling with all 3 of them? Grayson has to fulfill his royal duties and take an approved wife but the hotel manager, Sophia, has him tied in knots. As he pursues a fling with her and his 2 bodyguards, will he keep it light? Or will his heart get captured? Sophia is a strong woman that has overcome so much to find a place for herself. Being wanted by these 3 men throws her for a loop but she is brave enough to embrace this unknown and give us an incredibly decadent and sexy romance to devour. I loved Grayson’s struggle with duty while his heart is being pulled in a new direction. Gave me a sensually captivating romance to devour.
Read more
3 people found this helpful
Helpful
Comment Report abuse

Nancy Walker-Pirner
4.0 out of 5 stars Interesting concept
Reviewed in the United States on December 15, 2018
Verified Purchase
I don't know how I feel about the way the future king arrangement, I feel it was off color a bit. I mean I understand it was hot, but... sharing someone in that way seemed wrong too. the way they came together was great, the attraction was clearly there, it was believable how they together, I cried when he left her to handle the aftermath, seemed cowardly, but he quickly figured it out and came back to set things right. But still, the bodyguard thing was a little much for me, seemed forced and NOT very consensual. Like it was the Kings needs only. everyone else was just following orders. but thats just me, I found it entertaining, frustrating, and a good read overall.
Read more
2 people found this helpful
Helpful
Comment Report abuse

Donna feibusch
5.0 out of 5 stars An Awesome Read!
Reviewed in the United States on December 30, 2018
Verified Purchase
I loved reading Royally Screwed: A Contemporary Reverse-Harem Romance(Quick & Dirty), all about Prince Grayson & Sophia the acting Hotel Manager. Prince Grayson is in Monaco to do business and is staying at the Merino Hotel in the VIP suite with his two body-guards Chase & Nicolia. All three are attracted to Sophia and Prince Grayson, makes sure she is the only staff to ever come near their suite! The author wrote a story about a young women with a past, that comes to light and she looses everything! Read this book and see what happens to Sophia & Prince Grayson!! I loved reading it and hope you do as well!!
Read more
One person found this helpful
Helpful
Comment Report abuse

Kathy Seabrease
4.0 out of 5 stars Another juicy, and hot romance.
Reviewed in the United States on February 4, 2020
Verified Purchase
Sophia was just looking to fix her life, start anew. She had escaped her horrible past and was building a future. She had a job she loved, good friends and happiness... Being assistant mgr at a luxury resort now, her happiness was about to get even happier when given a trial run as the hotel mgr. Her life was on the upswing ...until she locked eyes with the mysterious VIP group that checked in...Nikolai, Chase and Grayson were about to turn her life upside down...
Read more
Helpful
Comment Report abuse

Sue T.
3.0 out of 5 stars Short, hot read
Reviewed in the United States on April 7, 2020
Verified Purchase
it is an enjoyable read, although I did not feel a deep connection with the characters. This is an insta-love plot with a few interesting twists. It is well-written with enough of a back story to keep your attention. I just kept wanting something more to make the interaction between Grayson and Sophia more believable. I found myself more interested in the supporting characters and wanting to hear their stories.
Read more
Helpful
Comment Report abuse

Jordan21435
5.0 out of 5 stars Fantastic read!
Reviewed in the United States on December 19, 2018
Verified Purchase
Very good story! You won't be disappointed with this one! Conflicts resolve quickly (which is a huge plus for me with a shorter read) and the chemistry kept me guessing but oh so worth it! These book scenes alone are amazing just by themselves. I wish there was more!!!!
Read more
One person found this helpful
Helpful
Comment Report abuse

Amazon Customer
4.0 out of 5 stars good book--
Reviewed in the United States on October 1, 2019
Verified Purchase
I enjoyed the book. The main characters tho... My problem is NOT how they were written. My problem is with their personality I guess...which really says a lot about how well the story is written. I mean, obviously, the author is fantastic at their job if you're sitting there cussing the main character a day after you finished the book lol.
Read more
Helpful
Comment Report abuse
See all reviews from the United States

Sharon Noble
5.0 out of 5 stars Great book!
Reviewed in the United Kingdom on December 16, 2019
Verified Purchase
From rags to riches, not quite rags, but Sophia is working at a hotel when the VIP guest arrives. He turns out to be the Prince of England!
Read more
Helpful
Sending feedback...
Thank you for your feedback.
Sorry, we failed to record your vote. Please try again
Report abuse

Nuala 📚
5.0 out of 5 stars Another great book
Reviewed in the United Kingdom on February 12, 2019
Verified Purchase
Loved reading this. Had everything you could want. I love books that are able to let you lose yourself in the fiction fantasy.
Read more
Helpful
Sending feedback...
Thank you for your feedback.
Sorry, we failed to record your vote. Please try again
Report abuse

sarah
5.0 out of 5 stars Great read
Reviewed in the United Kingdom on January 14, 2019
Verified Purchase
Would recommend this book. It's a great read. Couldn't put it down, once I started I had to finish. Can't wait to read more of siennas books
Read more
Helpful
Sending feedback...
Thank you for your feedback.
Sorry, we failed to record your vote. Please try again
Report abuse