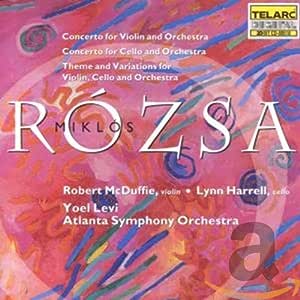 Like other European composers of his generation, Miklós Rósza, born in Hungary in 1907, found political and creative sanctuary in Hollywood, where he wrote concert music and many notable film scores. These three works clearly show that he never lost his roots in his native folk music. The violin concerto, a lush, romantic piece, was written at the urging of Jascha Heifetz and is tailored to his and his instrument's strengths, with singing, soaring melodies, brilliant passage work, and a very effective cadenza. Later, Heifetz and cellist Gregor Piatigorsky asked Rósza to write a piece for them; the "Theme and Variations" is the slow movement of a longer work. It is beautifully written for both instruments; based on a Hungarian melody, the variations are wonderfully inventive and varied in mood, character, and expression. The Cello Concerto too is extremely difficult and virtuosic, often quite wild and aggressive, and full of contrasts. The orchestration is excellent throughout, but not too heavy. The performances could not be better: McDuffie and Harrell surmount all the formidable technical challenges easily, their tone shimmers and glows, and their heartfelt but always refined expressiveness brings out the best in these unjustly neglected works. --Edith Eisler

HannibalTop Contributor: Classical Music
5.0 out of 5 stars Simply superb!!
Reviewed in the United States on July 5, 2007
Verified Purchase
Like a good many others no doubt, I grew up listening to Heifetz' legendary performance of the violin concerto and was so satisfied that I couldn't imagine anyone else doing it better or even as well - and the two or three I heard try, reinforced that point of view. - Then late one night I heard an extraordinary performance of it on the radio, and guess what? - this was it!

And even more perplexing, the violinist on this disc, Robert McDuffie, was unknown to me. How about that? (as Mel Allen had a wont to say) - an unknown came out of nowhere, as it were, and delivered a performance that made me want to stand up and cheer! He wasn't Heifetz, of course, but he sure as hell had the measure of this piece and in his own way, provides a musical experience of equal value.

- And let me add that I DID hear Heifetz LIVE play the Rozsa "Theme and Variations", many years ago with Piatigorsky, but as I remember to no greater effect than McDuffie and Harrell give it here. - And although I am less familiar with the cello concerto, I doubt you'll hear this wonderful piece done any better than on this disc.

Finally, I must confess that I am definitely no great fan of either Yoel Levi and his Atlanta Symphony Orchestra, other than astonishment at their ability in the past to manipulate the Grammy Awards judges into showering them with mostly undeserved prizes.

However, having said all that, here they come up trumps - HONESTLY! The orchestra play magnificently, and as is usually the case, Telarc records them in an equally magnificent manner. This disc may have just preceded their current, glorious SACDs, but Telarc, led by their leader Robert Woods, had even then learned how to record an entire orchestra, with solo instruments, and with bass notes unsacrificed, with astonishing fidelity. They certainly do themselves proud.

GET THIS DISC - IT'S A MUST BUY!
Read more
6 people found this helpful
Helpful
Report abuse

Lou B.
4.0 out of 5 stars Like many others I was first drawn to the magnificent music
Reviewed in the United States on November 26, 2011
Verified Purchase
of Miklos Rozsa through his film music. But after hearing several of his concert works it verified what I always believed and that was Rozsa was one of the greatest composers who ever graced the world of music. While I adore his film music like Ben-Hur, Quo Vadis, El Cid, and The Power, his concert music shows a different side of this great artist.
His Violin Concerto has always been one of my favorites by Rozsa and the playing here is sumptuous and the sound is crystal clear and I wish they had his Variations on a Hungarian Peasant Song here as well. The Concerto for Cello and Orchestra is a new favorite of mine upon hearing it for the first time and I find it to be a very powerful piece and it has whetted my appetite for more of the
composer's classical works. This is a splendid recording well worth having.
Read more
One person found this helpful
Helpful
Report abuse

Ilse von Hoffmanstahl
4.0 out of 5 stars A sentimental favorite
Reviewed in the United States on July 19, 2006
Verified Purchase
I found this CD after a long search, and I was absolutely ecstatic to finally find it. This was one of the earliest classical recordings I ever purchased (my collection has since grown considerably), and it's probably the one I love the best--although I confess that I don't just love it for its beauty, but because the first two pieces of the Concerto for Violin and Orchestra--the Allegro and Lento cantabile--were used in Billy Wilder's 1971 film, "The Private Life of Sherlock Holmes," one of my favorite movies(I would love to find an entire score of the film). Actually, reading Sherlock Holmes stories made me curious about classical music!

That said, I was very impressed by Mr. McDuffie's performance, and I'm considering buying other recordings where he is the principle artist. As for Rosza, his music takes my breath away and is just simply a lot of fun.
Read more
7 people found this helpful
Helpful
Report abuse

George F. Greenwald
5.0 out of 5 stars A much too ignored violin concerto
Reviewed in the United States on May 25, 2013
Verified Purchase
One of the finest violin concertos ever written, as is the cello concerto.
These performances rival my older recording by some of the greats of the past.
Read more
Helpful
Report abuse

Telstar
2.0 out of 5 stars The violinist is far from Heifetz
Reviewed in the United States on April 16, 2000
Verified Purchase
This is wonderful music, merely adequately performed. The violin tone is strident and forced. The technique is mostly there, but it is not effortless and singing. The recording is far too bright, and the instrumentalists are spatially located right in front of the listener's nose...far too forward. It reminds me of the old Columbia recordings with microphones down the soloist's throat. The tempo of the Violin Concerto is not as indicated and on the slow side. The CD release of the original Dallas and Heifetz on RCA is much more satisfying, cheap, and now difficult to find.
Read more
8 people found this helpful
Helpful
Report abuse

Jurgen Lawrenz
4.0 out of 5 stars Very welcome album
Reviewed in the United States on April 25, 2013
I can't begin to tell you how impressed I was by those reviews who found reminiscences of movie themes here and judged the album on that "merit". Not to mention those who are such experts of this rarely heard music that they deal out notes of good and bad playing and performance.
One thing I will say about the movie connection: When Korngold returned to serious composition, the Hollywood character of episodes in both the Symphony and the Violin Concerto stick out like a sore thumb. It makes those works sound incoherent, therefore ridiculous qua serious concert music. Not so with Rozsa. These composition do not betray their affiliation because the integration is so successful that the works hang together as authentic classical forms.
This album brings the composer's three concerted works for strings together on one disc. That in itself is already a high commendation for collectors. The performances are eminently satisfactory and the sound excellent. McDuffie cannot be expected to match Heifetz (the dedicatee) in the violin concerto, on other hand the recorded sound of the RCA album is of rather dull and limited quality. Best to have both. I have not heard the Double Concerto in the Heifetz-Piatigorsky recording, which I believe has never been reissued on CD and so I cannot comment. But I find Harrell's account of the Cello Concerto masterful.
If there is a Renaissance of Rozsa coming, we may expect some more competition. Meanwhile I observe that a Naxos issue has been released of the Violin Concerto. I heard it once and it does not seem to me a serious competitor.
I can't see how anyone buying this album could be seriously disappointed.
Read more
One person found this helpful
Helpful
Report abuse
See all reviews

Jim Burzio
5.0 out of 5 stars GREAT RECORDING
Reviewed in the United Kingdom on September 25, 2013
Verified Purchase
I was not familiar with these works but felt inclined to buy this disc as it was recommended by both Gramophone magazine and Penguin Classics. Very good recording by Telarc make for very enjoyable listening. Worth a try, at the price, if you want something not usually heard on the radio. Recommended.
Read more
3 people found this helpful
Report abuse
See all reviews
Back to top
Get to Know Us
Make Money with Us
Amazon Payment Products
Let Us Help You
EnglishChoose a language for shopping. United StatesChoose a country/region for shopping.
© 1996-2021, Amazon.com, Inc. or its affiliates