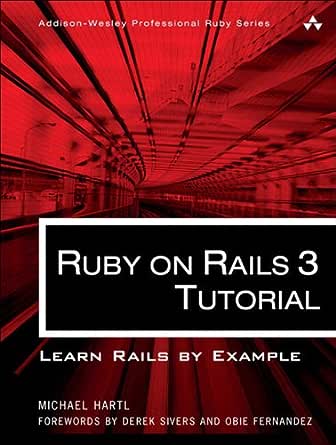 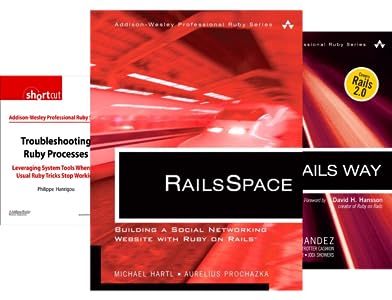 The Ruby on Rails™3 Tutorial: Learn Rails by Example by Michael Hartl has become a must read for developers learning how to build Rails apps.

—Peter Cooper, editor of Ruby Inside

Great job! I’m learning Rails, and found your tutorial to be one of the most detailed and hands-on guides. Besides many details of Rails, it also taught me about Git, Heroku, RSpec, Webrat, and most important (at least to me), it emphasized the Test-Driven Development (TDD) methodology. I learned a lot from your tutorial. Keep up the good job! Thanks so much for sharing it.

Ruby on Rails Tutorial is the best!

Just wanted to say that your Ruby on Rails tutorial is the best! I’ve been trying for a while to wrap my head around Rails. Going through your tutorial, I’m finally feeling comfortable in the Rails environment. Your pedagogical style of gradually introducing more complex topics while at the same time giving the reader the instant gratification and a sense of accomplishment with working examples really works for me. I also like the tips and suggestions that give me a sense of learning from a real Rails insider. Your e-mail response to a problem I ran into is an example of your generous sharing of your experience.

I love the writing style of the Rails Tutorial

I love the writing style of the Rails Tutorial, and there is so much content that is different from other Rails books out there, making it that much more valuable...Thanks for your work!

Michael Hartl is a programmer, educator, and entrepreneur. He coauthored RailsSpace (Addison-Wesley, 2008), and was cofounder and lead developer of Insoshi, a popular social networking platform based on Rails. He previously taught theoretical and computational physics at the California Institute of Technology, earning the Caltech Lifetime Achievement Award for Excellence in Teaching. Michael is a graduate of Harvard College, holds a Ph.D. in physics from Caltech, and is an alumnus of the Y Combinator entrepreneur program. He maintains the Rails Tutorial website at railstutorial.org. --This text refers to an alternate kindle_edition edition.

4.2 out of 5 stars
4.2 out of 5
83 global ratings
How are ratings calculated?
To calculate the overall star rating and percentage breakdown by star, we don’t use a simple average. Instead, our system considers things like how recent a review is and if the reviewer bought the item on Amazon. It also analyzes reviews to verify trustworthiness.
Top reviews

Tathagatha
3.0 out of 5 stars Good bag of tips and tricks. A bit unwieldy for a beginner
Reviewed in the United States on April 8, 2014
Verified Purchase
Now that I've been doing a lot of Rails, it's a really nice book to go back to and quickly refer to some useful tips and tricks. However, as an absolute beginner it became very unwieldy after the first few chapters.

Rails itself was super easy to learn, but given that it has so many moving parts, it takes time to get a good sense of the ecosystem (for a beginner). This book attempts to fasttrack that process and doesn't always succeed.

The first few chapters give a really detailed overview of the various concepts around the MVC architecture, which is very well written and which I found quite useful. But a bit later into the book, the author sometimes resorts to a few lines of code and a brief description of why you're making that change to the existing codebase. For an absolute beginner to web frameworks, this method of learner requires that you put aside a substantial amount of time for this book. If you don't and you come back after a couple of days, you won't be able to fully understand what the incremental change is for and you'll be lost as a result.

Still, it is a good book if you set aside some time for it and have some background in web frameworks and MVC. Beginners will benefit too, but IMO, only after 2-3 readings.

Windowshady
5.0 out of 5 stars A Great Jumping Off Point
Reviewed in the United States on March 22, 2012
Verified Purchase
If you're new to Ruby on Rails or Object Oriented Programming in general, this is the book for you. The author, Michael Hartl provides a thorough step-by-step guide to learning Ruby on Rails in simple, no-nonsense terms. You understand what you are doing and why you are doing it. This tutorial goes far beyond the typical "follow the bouncing ball" method found in most tutorials.

If you are willing to put in the work and have any level of aptitude for programming, you will learn a lot about Ruby on Rails from Ruby on Rails 3 Tutorial. You will also learn to program the right way using test-driven development methods.

* Hartl does not assume you have a background in programming and spends time explaining concepts like methods, variables, inheritance, etc.

* You learn not only what you are doing, but why you are doing it, which (for me anyway) allows you to understand broader ideas that will come into play as you move along.

* You will develop useful, functional applications and understand the principles behind them.

* The author stresses what is known in the industry as "best practices" so you know you are doing things the right way.

* A good portion of the first and third chapters of the book are devoted to installing and configuring third-party applications like git and rspec, which can be very frustrating to get running correctly (although the author provides a great deal of troubleshooting help for known issues with these tools). This, however, is necessary if you ever hope to learn Ruby on Rails and use it in a production environment. (So maybe not a "con").

* If you run different versions of Ruby or Rails than the author uses, you will run into problems, (which is to be expected).

Overall, I highly recommend this book.

[Caveat: I DO NOT, however, recommend this book for the Kindle. The source code in the book is difficult to read because it is rendered as a graphic, meaning the sizes of the font are fixed. So if your eyes are less than perfect, it is difficult to read via the Kindle].
Read more
One person found this helpful
Helpful
Report abuse

R. Maxseiner
5.0 out of 5 stars Great Intro to the Ruby on Rails World
Reviewed in the United States on April 11, 2011
Verified Purchase
I'm new to the Ruby on Rails world and tried to learn twice in the past. I was not successful with the on-line tutorials and videos. The problem I encoutered was that I was really trying to learn multiple topics at once. These topics are interrelated so as a novice it is hard distinguish them. Ruby, Rails, Test Driven Development, Git, HTML, CSS, Installation of the Development environment all need to be learned together so you can do things the 'right' way.

This book explains each of these topics and relates them to each other. At the beginning there are many places where the author tells you not to worry about the code or other components since that topic will be covered in a future chapter. I found this very valuable since in the past I would often get stuck trying to understand the code or how things could possibly work with just two lines of code. Ignoring these details allowed individual topics to be learned individually and then layered together. Numerous references are provided to detailed references on each topic. This is important since eventhough the book is 500 pages, it only scratches the surface of each topic.

After reading the book, I feel like I have transitioned from lost to a novice with much to learn. While this may not sound like an endorsement of the book, I'm not sure how I would have made this transition without this book. I would highly recommend this book to anybody who is trying to learn RoR.
Read more
One person found this helpful
Helpful
Report abuse

Taz
1.0 out of 5 stars Failed to teach simple concepts on how a rails app is developed
Reviewed in the United States on July 4, 2012
Verified Purchase
Focused on everything but explaining the WHYs. This allowed me to follow the book in a very procedural one dimesnsional way until i had this awesome looking app that i had no idea how i would make on my own after completing the book. Michael tells you to do things and that about it. Doesnt tell the whys and the hows are extremely verbose in explanations - for example he called pound signs (#) octothorps. Michael failed to cover simple concepts of developing a basic app. He was all over the place in his book. While talking views and HTML concepts, Michael would randomly jump into test cases using rspec. I love the fact that chapter one introduces git and completes with a webapp running on Heroku, but after that everything went down hill. He focused much of the energy on configurations, rspec, a bunch of gemfile addins and just way too much verbose octothorp garbage. Just read the rails guides. They are great!!!
Read more
7 people found this helpful
Helpful
Report abuse
See all reviews

C. Jack
3.0 out of 5 stars Kindle Edition - Consider buying directly
Reviewed in the United Kingdom on July 18, 2011
Verified Purchase
Excellent book, great introduction. However I'm giving this book a low score as the updates to bring it up to date with Rails 3.1 are only available online at the site for the book, not in the Kindle version. I would thus consider buying the book directly in this case.
Read more
2 people found this helpful
Report abuse

Marcin P.
5.0 out of 5 stars Great book for beginners
Reviewed in the United Kingdom on December 7, 2011
Verified Purchase
I went through a free online version of this book before decided to buy the hardcopy one. Great Rails tutorial for beginners, helped me a lot.
Read more
2 people found this helpful
Report abuse

Brice
5.0 out of 5 stars Best way to begin Ruby on Rails development
Reviewed in Canada on July 12, 2011
Verified Purchase
The book realy guides you step by step throught the development of a web application.
Besides, it teaches you a professional way of programming (source version control, code formatting,...)
At the end of each chapter you feel like you've become a better RoR programmer.
It is the opposite of learning with a theorical book.
Moreover this book introduces you to other technologies that are usefull to any Rails developper.
I my opinion it's realy the best way of learning rails.
Read more
3 people found this helpful
Report abuse