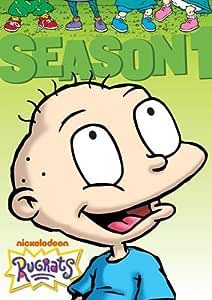 Share
STREAM ANYTIME with Prime Video from $11.99
Have one to sell?
Sell on Amazon

What's better than a clean diapee and a fresh bottle? How about the first-ever, 25-episode, 4-disc set of the complete First Season of Rugrats! It's Tommy, Angelica, Chuckie and the rest of the gang, taking you on adventures from the ground up. So c'mon, don't be a baby. Sit back and laugh along as the Rugrats turn the ordinary into the extraordinary; where a trip into the basement becomes a scene out of a Jules Verne classic and a broken lamp leads to courtroom drama (okay, the 'courtroom' is in the bedroom, but...).

4.7 out of 5 stars
4.7 out of 5
623 global ratings
How are ratings calculated?
To calculate the overall star rating and percentage breakdown by star, we don’t use a simple average. Instead, our system considers things like how recent a review is and if the reviewer bought the item on Amazon. It also analyzes reviews to verify trustworthiness.

Boofonater001
5.0 out of 5 stars FINALLY!!!!!!!!
Reviewed in the United States on June 27, 2017
Verified Purchase
This has been a LONG awaited release from Paramount. I used to watch Rugrats as a kid it is nice that Nick's official DVD company is taking the reigns and releasing this. A little history on the rugrats season DVD collections. For the longest time Amazon had released the season on the DVD On-Demand Program and that was good but the seasons had there weren't the best quality. When Paramount released them I immediately ordered because I knew that I would be getting my favorite 90's Nick show in the best quality possible.

Paramount if you are reading this PLEASE don't skip out on releasing the other season sets.
Read more
10 people found this helpful
Helpful
Comment Report abuse

ToonXpert87
5.0 out of 5 stars The one that started it all, alongside 2 other early Nicktoon shows!
Reviewed in the United States on June 11, 2014
Verified Purchase
Phooey to Shout Factory for not having home video rights to this legendary Nicktoon, nor its spin-off show All Grown Up (I asked them about it myself). But in May of 2014, the entire 2nd and 9th seasons finally came to DVD, and all 9 seasons drastically went down in price to under $20 each, making them a lot more affordable and accessible to me and my big sister. Her all-time favorite Nicktoon has always been Rugrats, no others as far as I can remember, as mine is a triumvirate of long-running smash hits; Rugrats itself and SpongeBob and Digimon, in no particular order. Until now, I always held back on getting Rugrats on DVD here due to their once-ludicrous prices (like SpongeBob's first 5 seasons used to be), and seasons 2 and 9 being incomplete sets and still at ludicrous prices. This is the season that started something big for Nick, on top of Doug and Ren & Stimpy also debuting on the same historic day; August 11th, 1991. Rugrats remained with Nick, and still does, when Doug switched from a Nicktoon to a Disneytoon, & Ren and Stimpy became an unbearable adults-only cartoon for Spike TV; both decisions made Billy West angry, who played the stars of both shows before Disney and Spike got ahold of them. But Rugrats is the one that truly stands the test of time above all the other Nicktoons that have ever been, or ever will be, in terms of how old & cherished it is. All 13 chunks of shows of the 1st season are in this set, including the debut episode my sister always hated (I can't imagine why); Tommy's First Birthday. Sadly, the show's real pilot episode's not in here, nor in any other season set, only in the Decade in Diapers DVD still in stores. Another thing that bugs me about this set, at least in my copy, during the ending & credits of The Trial, the picture and sound get buggy or glitchified. Still another bit that bugs me is the show's original Halloween episodes (Candy Bar Creep Show and Monster in the Garage); Nick and Paramount somehow neglected to add them to the Halloween & Holiday Celebration releases in 2004 & 2011. Thankfully, they're both in the 1st season set! There's a lot of fun memories to recall in each of these sets, for fans of all ages, even though me and my family still haven't seen every last episode of Rugrats yet, when I made this review. Since the beginning, Tommy's been the big-hearted leader, Chuckie the relentless scaredy-cat, Phil and Lil the fun-loving, bug-eating, argumentative twins; all of their language is baby-talk in "growed ups'" ears or those of any big kid or teens, or "aminals" like Spike or Fluffy, but not to the TV audience, and Angelica being worse than a "mean widdle kid" to all of them, to quote Red Skelton. The picture and sound are very much as they were, as when they were on Nick, sans commercials, bumpers, or the theme to most episodes except the first ones on each disc, very much like SpongeBob's DVD sets, only the end credits remain intact for every chunk of Rugrats shows, but no closed-captioning to be spoken of. (Every episode of seasons 2 and 9 have their themes intact plus closed-captioning.) Better to have Rugrats in seasons sets on DVD-R discs, than not to have them on DVD at all, as with Warner Archive releases in general (aside from the movie trilogy & the 2 Tales From the Crib movies that came to DVD after the original series "went bye-bye forever"). Believe it or not, all 3 of my favorite Nicktoons ran new episodes from the summer of 1999 to the summer of 2003, though Digimon belonged with Fox or Disney at the time & aired only on UPN from fall '02 to summer '03. If you're wanting to add Rugrats to your collection, for you or for Rugrats of your own, now's the best time to get any or all 9 seasons of Rugrats on DVD! All 3 shows' movies sold separately (in Digimon's case, its 4 TV movies still aren't on DVD in the USA). "Hang on to your diapies, babies, we're goin' in!" It's time to "baldly" go where no baby's gone before! By the way, the first season is a 3-disc set of all-single-layered discs. Seasons 2 and 9 contain all-dual-layered DVD-R discs, the complete sets that is.
Read more

Peter
4.0 out of 5 stars Finally, A Proper Release For The Best Of The Nicktoons
Reviewed in the United States on May 18, 2017
Verified Purchase
I am so happy to get these on pressed disc finally. To me this is the best of the nicktoons and I am very happy to see that the show is finally getting the release it deserves. There is one thing that does detract though that needs to be mentioned. While I love the opening sequence, it does not need to be played for every single cartoon. It gets annoying especially when watching all the cartoons on the disc. This is why I only give this 4 stars. I am okay with the opening playing for every two cartoons since this is how they originally aired, but for every cartoon it is too much. I hope this is fixed for future seasons.
Read more
6 people found this helpful
Helpful
Comment Report abuse

crazymusic
5.0 out of 5 stars FINALLY an official release!!!
Reviewed in the United States on May 4, 2017
Verified Purchase
Happy to finally own season sets (this one and season 2) of the Rugrats. Glad Paramount/Nickelodeon finally decided to release official pressed discs. Never bought any of the previous MOD (Amazon Exclusive) releases because they are all DVD-R. Can't wait for the rest of the seasons to be release. Hopefully season 1 and season 2 DVDs sells really well to convince Paramount/Nickelodeon there are fans out there wanting to own the show.
Read more
3 people found this helpful
Helpful
Comment Report abuse

Katie-Bell
5.0 out of 5 stars A Nostalgic Classic
Reviewed in the United States on June 5, 2009
Verified Purchase
I cannot even begin to express how joyed I am to have the 1st season of Rugrats on DVD! I have waited for this for YEARS! And I never thought that they would come out with them! When I saw that this was an Amazon exlusive, I literally freaked out. Rugrats was, and still is, my all time favorite cartoon. I watched this as a kid in the 90's. I remember being either 5 or 6 years old when I first started watching this. Now, 15 years later, being 20, I STILL love them! I am absolutely in love with all the old episodes before Dil came along. After Dil, the show kinda went down. I haven't seen some of the ones on the 1-4 seasons in years. Now I can watch them anytime I want and pass them on to my children! The DVD's work great so far. I've been playing them on my Xbox 360 so I don't know how they are on other DVD players. This is a must buy for old school 90's Rugrats lovers! You won't be disappointed!

I chose Super Saver Shipping and this product got here in less than 4 days. I was VERY impressed. Thank-you Amazon for your speediness and thank-you for allowing us fans to buy this wonderful nostalgic classic cartoon!
Read more
7 people found this helpful
Helpful
Comment Report abuse
See all reviews