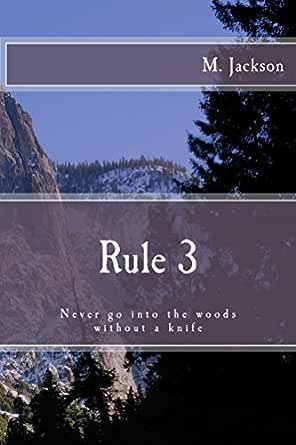 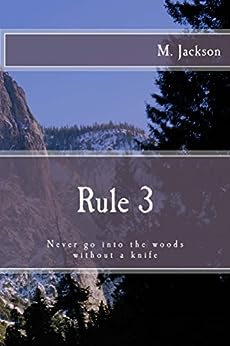 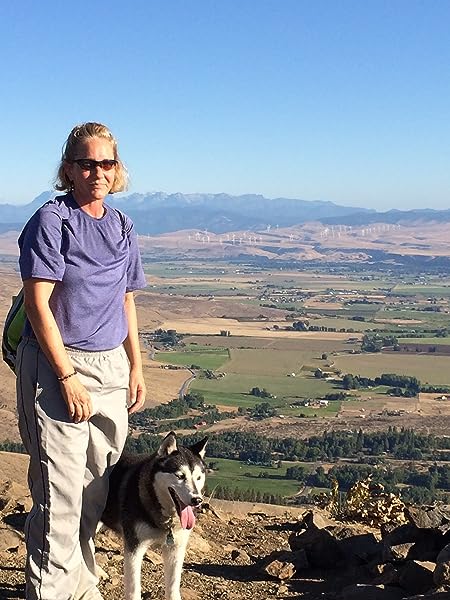 Rule 3: Never go into the woods without a knife Kindle Edition

M. Jackson lives in the Pacific Northwest and is an outdoor enthusiast. Jackson graduated from Central Washington University where she earned degrees in Psychology and Sociology and did research in police work. Jackson is a black belt in karate and a member of the American Shudokan Association. Jackson is on the board of directors for the Rodeo City Equine Rescue Association and owns her own rehabilitation company. --This text refers to an alternate kindle_edition edition.

4.5 out of 5 stars
4.5 out of 5
13 customer ratings
How does Amazon calculate star ratings?
Amazon calculates a product’s star ratings based on a machine learned model instead of a raw data average. The model takes into account factors including the age of a rating, whether the ratings are from verified purchasers, and factors that establish reviewer trustworthiness.
Top Reviews

Laurie Davis
4.0 out of 5 stars It was like a junk cookie, but better
Reviewed in the United States on March 12, 2017
Verified Purchase
This book showed up on one of the freebie lists I subscribe to, and it was awhile before I got around to it. The opening chapter gives a clear picture that this is a fantasy novel: a dragon is present, and several people appear to be tracking it. The chapter fades to black, and we're introduced to a local sheriff's deputy who is mired down. Well-respected by her colleagues, and warmly loved by her family, nonetheless, she has to contend with an competent boss, local politics, and being thrust into a diplomatic situation when visiting royalty come into town.

Set against the backdrop of the Pacific Northwest woods, characters range from local geologists to Search & Rescue team members. The storyline's genre changes as well. We start off with what appears to be a fantasy novel, followed by an in-depth analysis of what it means to be minority on the job, followed by some hints of romance and adventure.

And then.... and then, the dragon reappears and we go full-blown action/adventure.

This was an enjoyable ride, fueled by strong character development, and the author laying believable groundwork in the story's arc so that when the real action begins, we're solidly along for the ride.

I was hooked. So much so that when I reached the end, I mourned for days. Perhaps we'll see the Deputy again in another setting; I surely hope so.

Karen
5.0 out of 5 stars The most satisfying book I"ve read in a long time.
Reviewed in the United States on March 27, 2017
Verified Purchase
I thoroughly enjoyed this book. It kept my interest piqued, causing me to stay up late reading and worrying over the characters, wondering what would happen next. I appreciated the noble spirit of the protagonists and the reassurance they conveyed through their faith. It was not flaunted, but rather presented as a normal way of life, as it should be. Technically the book needs more editing as in cleaning up the sentences of extraneous words or completing thoughts. Some grammatical errors could be eliminated. All in all this was a true old-fashioned pageturner with lots of action, some romance, and the ultimate good triumphing over wrong. I was frustrated to not learn what happened in Honduras until later in the story. I was bothered that there was no further mention of the search for the child after the fire, or what started the fire time begin with. Now that I have finished the book I want to know more-what happened to Myri, did she get back to Alonso,, did her dad re-acclimate to his former life? How did the police explain the carnage on the mountain? What about Barton? Enquiring minds want to know!
Read more
One person found this helpful
Helpful
Comment Report abuse

Sandra Julian Barker
5.0 out of 5 stars Great Book!
Reviewed in the United States on June 26, 2018
Verified Purchase
I really enjoyed this book and I would love to read more from this author. Unfortunately, I can't find anymore books by her - boo-hoo! Anyway, I highly recommend this "Rule 3" to anyone who enjoys an adventure, great characters, and a well-written, interesting story. Really good!
Read more
Helpful
Comment Report abuse

Kindle Customer
3.0 out of 5 stars Not sure I liked the ending
Reviewed in the United States on April 27, 2018
Verified Purchase
I certainly hope there's a sequel. This story is three years old, so I kind of feel like I just finished the Lost tv series. Meaning, no discernable ending. This was a good read, but I hate how it ended. Way too many questions, and it was a long book.
Read more
Helpful
Comment Report abuse

vem
5.0 out of 5 stars Great read, thoughtful and intriguing
Reviewed in the United States on January 20, 2016
Verified Purchase
Wonderful story taken from revelations 12. Intriguing read that keeps you guessing. I couldn't, put it down. Waiting for another novel by m Jackson. Would make a great mini series.
Read more
2 people found this helpful
Helpful
Comment Report abuse

Kyria Baker
5.0 out of 5 stars Riveting mystery with just a touch of fantasy
Reviewed in the United States on March 24, 2018
Verified Purchase
I loved this book! The fantasy component didn't take up a lot of space in the bulk of the story, giving the reader time to get to know the characters as real people. The mystery was intriguing and kept me guessing, though I was pleased to learn I had guessed right. I do hope there are more stories to come from this author!
Read more
Helpful
Comment Report abuse

ron farquharson
5.0 out of 5 stars Five Stars
Reviewed in the United States on July 31, 2016
Verified Purchase
I couldn't put it down. I need to find if there is a 2nd book out or coming soon
Read more
One person found this helpful
Helpful
Comment Report abuse

Eppic
5.0 out of 5 stars Great read!
Reviewed in the United States on August 29, 2015
Verified Purchase
Wow this grabbed me from the beginning and I couldn't put it down! This is a good fast paced story with an unexpected twist. Hoping for a sequel!!!
Read more
One person found this helpful
Helpful
Comment Report abuse
See all reviews from the United States