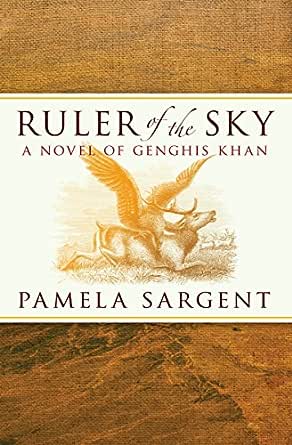 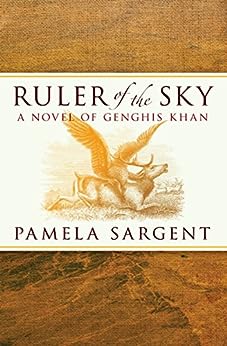 Ruler of the Sky: A Novel of Genghis Khan Kindle Edition

The ruthless 13th-century warrior Genghis Khan, who built a vast empire in his drive for world conquest, is the subject of this workmanlike historical novel, a panorama of warfare, intrigue, sex and betrayal. In Sargent's ( The Shore of Women ) somewhat romanticized portrayal, the Mongol ruler is a schizoid figure capable of both monstrous savagery and saintly humility and forgiveness. We see Genghis Khan through the eyes of women who loved and manipulated him. His doting mother, Honelun, stirs his lust for vengeance by telling tall tales of his father's poisoning. His chief wife, Bortai, is bitter over his neglect of her. Another wife, Ibakha, rashly attempts to convert the ruler from worship of the sky-god Tengri to Christianity. Still another spouse, Ch'i-kyuo, a ladylike Chinese princess, has lesbian trysts with a Han concubine. Genghis Khan himself enjoys simultaneously bedding two additional wives, Tatar sisters Yisui and Yisugen, and we also read of his homosexual relationship with a friend whom he later orders to be hung. Sargent's flat prose is plodding and ridden with cliches, but it helps anchor the exotic excesses of the violent world she describes.
Copyright 1992 Reed Business Information, Inc. --This text refers to an alternate kindle_edition edition.

This formidably researched and acquisitively written novel is surely destined to be known hereafter as the definitive history of the life and times and conquests of Genghis, mightiest of Khans. - Gary Jennings, bestselling author of Aztec ... a successful attempt to flesh out a mythic figure...Genghis Khan seen through the eyes of significant women. Ruler of the Sky will be a pleasant surprise for readers. -- Chicago Tribune --This text refers to an alternate kindle_edition edition.

Pamela Sargent has won the Nebula and Locus Awards and was honored in 2012 with the Science Fiction Research Association’s Pilgrim Award, given for lifetime contributions to science fiction and fantasy scholarship. Her many novels include Venus of Dreams, The Shore of Women, The Golden Space, The Sudden Star, and The Alien Upstairs.

About Ruler of the Sky, Sargent’s historical novel of Genghis Khan, told largely from the points of view of women, Elizabeth Marshall Thomas has commented: “Scholarly without ever seeming pedantic, the book is fascinating from cover to cover and does admirable justice to a man who might very well be called history’s single most important character.” The Washington Post has called Sargent “one of the genre’s best writers,” and Michael Moorcock has said of her work: “If you have not read Pamela Sargent, then you should make it your business to do so at once. She is in many ways a pioneer, both as a novelist and as a short story writer. . . . She is one of the best.”

Sargent is the editor of the Women of Wonder anthologies, the first collections of science fiction by women. Her novel Climb the Wind, set in the United States after the Civil War, was a finalist for the Sidewise Award for Alternate History, and her novel Earthseed has been optioned by Paramount Pictures. Melissa Rosenberg, the scriptwriter for all five Twilight films, is set to write and produce the movie through her company Tall Girls Productions.

Sargent, the author of numerous sf novels, has produced a neatly crafted work that manages to provide a panoramic view of the charismatic leader Genghis Khan while at the same time presenting the background mosaic of warring Mongol tribes in enough detail to keep the reader from getting hopelessly confused. A nice touch is Sargent's telling the conqueror's story from the viewpoint of the women in his life--mother, wives, and daughters. This technique makes it possible to introduce considerable domestic detail and prevents the novel from becoming a mind-numbing catalog of battles. Even so, the last 200 pages are so mired in accounts of conquests that they drag a bit, and the multitudinous characters--only a few developed in any depth--blur together. Still, the exotic setting and inherent drama of Genghis Khan's life make this an appealing novel to fans of historical fiction.
- Beth Ann Mills, New Rochelle P.L., N.Y.
Copyright 1992 Reed Business Information, Inc. --This text refers to an alternate kindle_edition edition.
Read more

3.8 out of 5 stars
3.8 out of 5
15 global ratings
How are ratings calculated?
To calculate the overall star rating and percentage breakdown by star, we don’t use a simple average. Instead, our system considers things like how recent a review is and if the reviewer bought the item on Amazon. It also analyzes reviews to verify trustworthiness.
Top reviews

Richard Wills
5.0 out of 5 stars Impressive blend of scholarship and the writer's art.
Reviewed in the United States on January 12, 2015
Verified Purchase
I am very impressed having read "Ruler of the Sky" and I am equally impressed with Pamela Sargent, the author of this work. . I do have some limited background knowledge of the times and the events covering the life of the man to become the Genghis Khan. It is breathtaking how detailed but vibrantly alive Ms Sargent reveals her characters and their involvement in the events that would shape World History.

Even eight centuries later, there isn't a Eur-Asian military strategist, who does not ask themselves the burning question; "What would Genghis Khan do in this situation?"

This work takes a bit of determined effort to complete but it is a pleasant journey (okay, if you have a strong stomach) through a history, we all too often ignore...At our own peril.

Once you have read this, I strongly recommend you purchase and read Cecelia Holland's masterpiece "Until The Sun Falls" which picks up on the evolution of the Mongol Empire, ten years after the ending of "The Ruler Of The Sky".

These books deserve to be a two volume set of readable but realistic Historical Fiction in everyone's library.

Bruce
5.0 out of 5 stars Very good historical fiction
Reviewed in the United States on February 9, 2015
Verified Purchase
I look forward to ms. Argent writing a sequel to this one, taking the Mongols to the height of their empire, followed by another for the decline and fragmenting of the empire as history rolls on. Well done, I look forward to anything else this author writes in this genre.
Read more
Helpful
Report abuse

wooster
1.0 out of 5 stars Over Detailed History Of Genghis Kahn
Reviewed in the United States on June 12, 2015
Verified Purchase
Very long and drawn-out (fictional) history of Genghis Kahn. The first 1/3 of this book tries to lay out early friendships, alliances and enemies that will (supposedly) shape the future of the great leader. This went into way too much detail for me and wasn’t very convincing. Think I’d rather have a condensed (and more historically accurate) version. I gave it up at 35%.
Read more
One person found this helpful
Helpful
Report abuse

EMWK
2.0 out of 5 stars Couldn't get into it...
Reviewed in the United States on February 14, 2017
Verified Purchase
Couldn't get into it, even though I had an interest in the subject. Not the writer's fault, I believe.
Read more
Helpful
Report abuse

jojoview
3.0 out of 5 stars Three Stars
Reviewed in the United States on February 23, 2015
Verified Purchase
Interesting subject, but too long and too many characters.
Read more
Helpful
Report abuse

Avid Reader
5.0 out of 5 stars The Novel as History
Reviewed in the United States on January 18, 2004
Pamela Sargent is generally thought of as a science fiction writer but she has actually written for several genres. One wonders why she chose Ghengis Khan as a subject but regardless of the reasons, I am glad she undertook this thankless task. Most Americans are unfamiliar with the great conqueror or are unaware that his empire was the largest empire in the history of the world.
The remarkable thing is that Temujin, his real name, was born in the desert of Mongolia without privelege. Over the years he transformed Mongol riders into killing machines and began an exapansion that for a time threatened to engulf the entire European-Asian landmass. It is hard to generate empathy not to mention sympathy for such a character but he was a reflection of his times - ruthless, loyal, brave, resourceful.
The novel begins when he is a child and follows his rise through the ranks by crafty politics, deal-making and fighting skill. The story captures the mood, the scenery, the pulse of life within the inner circle of the leader. The battles are detailed as are the geopolitical discussions. The action is in turns exciting, tender and mesmerizing. When he died his empire was divided among his sons and eventually fell apart. Today, less than 3 million Mongols eke out a subsistence living in the middle of Asia.
Read more
19 people found this helpful
Helpful
Report abuse

He needed a lead time of 10 years.

His book counts as an epos in the russian literature and is well known around the globe.
Just a great book.

Pamela Sargent (science fiction writer and feminist) didn't wrote this book, NO. She copied it!

If you read the beginning of "Ruler of the Sky" and "Zhestokiy Vek",
you will find the same words, the same proceeding and the same character.

And unfortunately it's almost with the rest of this book.
Of course... there are some sections where Sargent didn't copy one to one, some passages are a little bit different
but it's a shame to do it, though. 5 stars for the orignal version.

Now I can understand why Pamela Sargent hasn't a facebook account ;)
there would be a s***storm of comments about her "work"!

Of course... there are some sections where Sargent didn't copy one to one, but it's a shame to do it, though.

If your russian knowledge is good enough,
you should read the original book by Kalashnikov - one of the best books in the world. Period.

Kindle Customer
5.0 out of 5 stars Genghis Khan
Reviewed in the United Kingdom on December 6, 2018
Verified Purchase
One of the best novels I have read in a long time.
I highly recommend i
Read more
Report abuse

wanttobegolfer
5.0 out of 5 stars excellent read as a fan of Genkis Khan
Reviewed in the United Kingdom on December 10, 2018
Verified Purchase
great read and fairly true to history
i recommend this to any historical reader
especially as a any fans of the mongol tribes
Read more
Report abuse

Mu009
4.0 out of 5 stars Really good!
Reviewed in India on August 28, 2016
Verified Purchase
Regarded as one of the most authoritative books on Genghis Khan. While I can't be sure of the veracity of it all (especially with regard to people's dying thoughts presented in the book) it is a thoroughly engaging read, and for what it's worth, I highly recommend it.
Read more
Report abuse
See all reviews