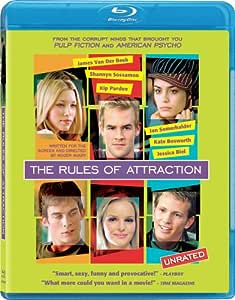 The Rules of Attraction [Blu-ray]

Forget everything you thought you knew about higher education. Academy® Award-winning writer/director Roger Avary masterfully takes you back to school and drops you in the middle of the drugged-out, sexed-up lived of some of Camden College's most disaffected students. Meet Sean Bateman (James Van Der Beek), a womanizing drug dealer whose quest for a connection brings him face-to-face with Lauren (Shannyn Sossamon), a sensitive virgin looking for love but saving herself for the much sought after Victor (Kip Pardue). All the while Paul Denton (Ian Somerhalder) wants to make a connection of his own...with Sean. This darly funny satire of life, love and the pursuit of socail debauchery is based on the best-selling novel by Bret Easton Ellis.

3.9 out of 5 stars
3.9 out of 5
497 global ratings
How are ratings calculated?
To calculate the overall star rating and percentage breakdown by star, we don’t use a simple average. Instead, our system considers things like how recent a review is and if the reviewer bought the item on Amazon. It also analyzes reviews to verify trustworthiness.
Top reviews

Amber
1.0 out of 5 stars Rape isn’t the victim’s fault
Reviewed in the United States on June 13, 2020
Verified Purchase
Starts with a rape scene. Couldn’t even finish watching. The lady doesn’t even try to stop it, but acts like it’s her own fault. What is wrong with video industry to even put this out there? Even though that isn’t the point of the movie, making a woman look like it’s her fault for being raped, and glossing over the rape by looking at all the back stories that led up to this rape scene is appalling. I’m probably taking this all out of context since I couldn’t finish watching it, but still. I don’t care if it’s based on a book or if it’s trying to be artsy, do not passively condone rape by having the victim just shrug it off.
Read more
12 people found this helpful
Helpful
Comment Report abuse

shopgirl76
1.0 out of 5 stars Unwatchable
Reviewed in the United States on July 2, 2020
Verified Purchase
This is one of the worst movies I've ever attempted to watch. It's vapid while pretentiously aiming beyond its reach for some deeper meaning that's obscured by the constant, incessant, mind-numbingly idiotic sequencing, interspersed with squelching music while trying to Pulp Fiction itself into some semblance of narrative.

Watched about 20 minutes before I gave up; not worth the any more of the brain cells I've already sacrificed to this derivative, pandering waste of time.

The point of it is to express the meaninglessness of existence when you are so caught up in your own world you can't even rationalize staying alive. It's just a jumble. Maybe you can't relate, and yes, the movie seems to bite off a little more than it can chew. Have you ever tried to figure out why the great girl is so attracted to the jerk, despite red flag after red flag popping up in front of our faces? It doesn't make sense to us. That's why it's powerful.

This movie was based off of an author trying to make sense of it all and translating his or her experience into fiction. No one who has ever experienced that level of sadness or nihilism could possibly understand. Go to the movies, spend 13 dollars on a small popcorn, and enjoy the bright animation of the latest pixar cash cow. You won't have to think at all.

Alexandra
4.0 out of 5 stars A creative satire almost as good as the book
Reviewed in the United States on July 7, 2019
Verified Purchase
It's been a few years since I've read the Ellis book this film is based on, so I can't really speak to the accuracy of detail, but I can say this film does a pretty good job of capturing the spirit of the original. Since the book is so focused on the internal characters, mainly satires of the students at expensive private liberal arts colleges, it doesn't always transfer super well to the screen, but the actors all do a really good job of showing these bred-to-be-shallow, wanna-be-deep kids. The use of re-wind and split screens is albeit campy, super creative, and something most filmmakers would shy away from. Somehow, it works.
The soundtrack has got to be the single best part of the whole film. The Cure, Love and Rockets, Blondie, the Rapture... all seamlessly blended with an original electronic score by Tomandandy. I've been listening to the album on repeat since I finished the movie last night!
I absolutely adore this film, but can't give it that last star because just got more out of the book. I know it's a little unfair to judge an adaptation on the original, but surely there could have been some way to get a bit deeper into the characters. (Shorter/fewer sex scenes, maybe? Just saying. There are a lot.)
Overall, a film that's a pretty good adaptation of a great book. It's especially fun to watch as a college student, bonus points if you're at a liberal arts school. Remember as with all Ellis: it is a satire/commentary, not a glorification.
Read more
3 people found this helpful
Helpful
Comment Report abuse

Dana Phelps
5.0 out of 5 stars Unique, Substanstive, Fun, Stylish, Dramatic, Poigniant-- Brilliant
Reviewed in the United States on June 22, 2020
Verified Purchase
It manages to find realism where films rarely want to go while maintaining a fine balance between comedy and drama. It's rare that a film will achieve such a gambit of characterizations as well developed and original as this but to find it within a story which touches us in our hearts (not family moment but more romantic aching) with our sense of chaos about life is even more so. The acting is utterly outstanding with amazing performances from face I don't know from any other films in most cases. The fact that this film has aged into its own, like wine or cheese is proving that the directorial talent (who got the Academy Award with Tarantino) is as good as anyone out there. His hammy style cuts into us with brazen criticism and reveals a magical touch to the artfulness of the creation of a motion picture.

Andycl
2.0 out of 5 stars It does get somewhere despite itself
Reviewed in the United States on June 15, 2020
Verified Purchase
Good for viewing for listening to much engaging music. The theme has something to do with nihilism or over-the-edge edginess. The best line may be: "Nobody ever really knows anything about anyone else". This is the opposite of original but said at the end, describes events.

Kids too cool for school at a private college want better, but as a very good and prominent Shannyn Sossamon decides, they may not be worth it. She hardly gets credited while I barely remember Kate Bosworth, listed as third star. The acting is good from everyone. Best parts are a rapid trip to Europe and the following reunions, putting character's inner voices in the script, and realizing I may have experienced something like what was shown. Me, in this movie?-- yikes.
Read more
Helpful
Comment Report abuse

Brion Vytlacil
5.0 out of 5 stars One of the great movies of the era.
Reviewed in the United States on June 18, 2020
Verified Purchase
Every possible offense under the sun set within beyond clever frameworks, cinematic tricks and a stellar cast. The soundtrack alone and sound design would be enough. But there are segment after segment of rare treasure. Bleak black dark as pitch humor and quite possible the greatest ten minutes of contemporary cinema set right at the halfway mark as Swoozy Kurtz and Faye Dunaway down Vodka Collins and Valium whilst their sons cavort to George Michael's Faith up in the hotel room. Indelible. Classic. Funny. Tragic. 10/10
Read more
One person found this helpful
Helpful
Comment Report abuse
See all reviews

Elleppi
4.0 out of 5 stars From the co-author of Pulp Fiction, one of the best films ever done about contemporary youth
Reviewed in the United Kingdom on September 8, 2015
Verified Purchase
One of the fewest intelligent and interesting films about contemporary youth.
Shot with a hip style but also with a personal and original point of view, in order to balance the fresh and trendy appeal of contemporary language with some more solid writing and sense of cinema.
Not just a music video kind of film, but a mature and still explosive story, seen from different points of view, structured but also warm, someway detached but also emotional, like a kaleidoscope of a very combustible stuff whose tension lies underneath the cover of social code and cliché.
Roger Avary (who wrote Pulp fiction) vision of that generation is seen with the eyes of an ex-student who investigate with fresh curiosity but also with some distance, so his vision is not biased, neither pro or against them.
The film is fully enjoyable and presented on a very good blu ray, starring some young actors in what might be their best role and performance of their careers.
Roger Avary's best film ever and probably the best in years about this subject, maybe inferior only to Paranoid Park and Elephant.
Read more
2 people found this helpful
Report abuse

Pete in UK
4.0 out of 5 stars Worth a watch
Reviewed in the United Kingdom on February 25, 2016
Verified Purchase
A good - if at times confusing film. Sometimes gritty, sometimes amusing - not as good as some European films of a similar ilk but worth a watch.
Read more
Report abuse

Alex Auld
5.0 out of 5 stars Five Stars
Reviewed in the United Kingdom on July 1, 2018
Verified Purchase
One of my favourite films.
Read more
Report abuse

Lauren
3.0 out of 5 stars so so
Reviewed in the United Kingdom on January 18, 2014
Verified Purchase
I bought this as I really like Ian somerhalder, it was very strange and seemed cheaply made. I would maybe give it another watch though.
Read more
Report abuse
See all reviews