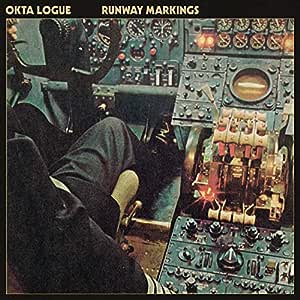 Secure transaction
Your transaction is secure
We work hard to protect your security and privacy. Our payment security system encrypts your information during transmission. We don’t share your credit card details with third-party sellers, and we don’t sell your information to others. Learn more
Details
Ships from
-importcds
Sold by
-importcds
Return policy: This item is returnable
You may be charged a restocking fee upto 50% of item's price for used or damaged returns and upto 100% for materially different item.
Read full return policy
New & Used (11) from
$13.17 + $3.99 shipping

What will remain once you leave everything behind? Once you cut the grand gestures, the pressure, the expectations? What will remain when you just are? Oh, a hell of a lot. It is then that a distillate is showing – the thing that really counts. Pantha rhei, the ancient Greeks called it. "Runway Markings," Okta Logue call it. And with it, they will change the music year of 2019 more that they are currently aware of. Everything is easy with pathos and bombast – nothing is more apparent in the loud world of Rock and Roll. Without the common delusions of grandeur, however, you really have to come up with something. With something like "Runway Markings." Yet, "Runway Markings" is no calm, no shy record. Quite the contrary, in fact. It is radiating dynamics, it is captivating, exhilarating, is growing into crescendos and welcomes in with an utterly holistic aura. Bred and raised in Hamburg's own Clouds Hill Studio, Okta Logue consciously left enough room for ideas to spread, for spontaneity, for spur of the moment things. "We wanted the songs to retain an untamed, uncontrollable edge. We simply watched where we would go once we stopped thinking everything through." "Runway Markings" is nothing but a salubrious piece of music, an album covering the listener like a blanket. Already after a few spins, it feels like an old friend, like a soul mate. Remarkably enough, Okta Logue pull off such a feat without an outcry, without alarm or bombast –and release the most touching tunes German Indie culture came up with in the recent past.

Amazon Kunde
5.0 out of 5 stars Sehr gut
Reviewed in Germany on November 24, 2019
Verified Purchase
Sehr gut
Read more
Report abuse
Translate review to English
See all reviews
Back to top
Get to Know Us
Make Money with Us
Amazon Payment Products
Let Us Help You
EnglishChoose a language for shopping. United StatesChoose a country/region for shopping.
© 1996-2021, Amazon.com, Inc. or its affiliates