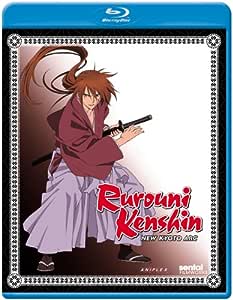 Although she's only sixteen and looks even younger, Misao Makimachi is already a skilled and competent member of the Oniwabansh? ninja clan. Which is a fortunate thing for Misao, as her onimitsu talents may be all that keeps her alive when a journey in search of the leader of the clan, Aoshi Shinomori, leads her instead into a face-to-face encounter with an even more dangerous man and a plot to overthrow the Meiji government! Quickly enmeshed in the affairs of the legendary assassin Hitokiri Batt?sai, now known as Kenshin Himura wielder of the reverse-blade sword, Misao finds herself pulled into the middle of a deadly intrigue against Makoto Shishio, who is orchestrating the conquest of all Japan, beginning with Kyoto! Get ready for blades to flash and blood to flow as Nobuhiro Watsuki's acclaimed Rurouni Kenshin returns at long last to the world of animation in an epic masterpiece: Rurouni Kenshin - New Kyoto Arc!

Based on Nobuhiro Watsuki's manga, Rurouni Kenshin: New Kyoto Arc (2011) is a retelling of the adventures of Kenshin Himura, the deadliest assassin in Japan during the civil wars surrounding the fall of the Tokugawa Shogunate. Although he remains the greatest swordsman in the country, Kenshin has renounced his violent past. He fights with a sakabato, a reverse-blade sword that can disable but not kill an opponent. His relatively quiet life is disrupted by the power-mad Makoto Shishio, who survived a botched execution by government agents. An attempt to incinerate his body left him alive but hideously scarred. Shishio plans to overthrow the Meiji government and make himself ruler of Japan. Only Kenshin can defeat him, but will that effort force him to break his oath never to kill again? Must he once again become a murderer to prevent a civil war? Rurouni Kenshin: New Kyoto Arc tries to cover in 90 minutes the storyline that occupied 34 episodes of the 1996 broadcast series. Not surprisingly, the filmmakers can only skim the surface of the story. There's simply no time for the character interactions, elaborate duels, awkward romance, and broad comedy that made Rurouni Kenshin one of the best-loved anime series of all time. Even the climactic duel between Shishio and Kenshin goes by too quickly to make much of an impression. J. Shannon Weaver, who also provided Kenshin's voice in the OVA prequel Samurai X, gives a much flatter reading than Richard Hayward in the Rurouni Kenshin broadcast series. Fullmetal Alchemist: Brotherhood showed it was possible to remake a popular series and improve it, but New Kyoto Arc feels incomplete and unsatisfying. (Rated TV MA V: graphic violence, grotesque imagery, tobacco use, sexual situations) --Charles Solomon

KY
4.0 out of 5 stars Its worth it
Reviewed in the United States on August 16, 2018
Verified Purchase
It was not as bad as I expected. I have read other review about how this is rushed and its was terrible. I just have to see it for myself. I agree that if you havent watched the original Ruroni Kenshin kyoto arc the entire season. You will have a hard time following whats going on
But still as a Ruronai kenshin fan and for this price, it is great.

K.D.
2.0 out of 5 stars Lackluster. All around.
Reviewed in the United States on July 21, 2016
Verified Purchase
The animation is decently pretty. But that's about it. The story isn't as fleshed out as it should be. If you don't already know Kenshin you'll be lost. If you do already know Kenshin you will have almost certainly read or watched the original Kyoto Arc, which is superior to this.

Now about the dub. It's pretty awful. Now I know that they got the Kenshin from all the other OVA's and movies, but all around it's pretty lack luster. And most of the pronunciations are pretty awful as well. Now maybe this is just coming from a person who enjoyed the cast from the (Media Blasters) dub of the original anime, but this just was lacking. All around.

The Japanese track makes it better, but it doesn't do enough to realy save it. All around it's pretty lack luster. And actualy if we're honest about the animation - it looks pretty some places but it looks wonky and messed up plenty of other places. All around mediocre. If you want the Kyoto Arc - Read the manga. Watch the original anime. Watch the Live action movies. Just don't watch this.

merlin513
3.0 out of 5 stars Rurouni Kenshin: New Kyoto Arc [Blu-ray] (1996)
Reviewed in the United States on March 25, 2013
Verified Purchase
If you aren't familiar with the original Kenshin anime series, don't bother... You will be absolutely and totally lost, with no way of figuring out who people are, why they are doing what they are doing, etc... The first segment is SO disjointed and rushed it's practically impossible to follow for those who ARE familiar with the series! The second segment is slightly better. Part 2 doesn't follow the original plot line for either the manga OR the anime and goes merrily off into it's own territory, so it was a little easier to follow and a little more enjoyable. I liked seeing more of Monk Anji, and Yumi's role is expanded upon, but...

final verdict...if you're not a HUGE Kenshin fan, I'd pass on this. It's expensive, there are NO extras, and I wasn't even that impressed with the new animation. I'm being generous giving it 3 stars.
Read more
8 people found this helpful
Helpful
Report abuse

Matthew
5.0 out of 5 stars Great Anime.
Reviewed in the United States on June 8, 2017
Verified Purchase
Different than the anime TV series but still worth the purchase.
Read more
Helpful
Report abuse

harpal chauhan
1.0 out of 5 stars Never buy this pls
Reviewed in the United Kingdom on April 27, 2017
Verified Purchase
Bought by mistake didn't return on time lool so many bad reviews I'm not even opening it £28 wasted lol its an insult to the rurouni keshin story AVOID LIKE THE PLAGUE😨😨😨😨😨
Read more
Report abuse
See all reviews