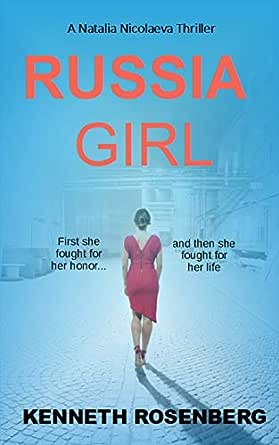 You've subscribed to A Natalia Nicolaeva Thriller! We will preorder your items within 24 hours of when they become available. When new books are released, we'll charge your default payment method for the lowest price available during the pre-order period.
Update your device or payment method, cancel individual pre-orders or your subscription at
Your Memberships & Subscriptions
There was an error. We were unable to process your subscription due to an error. Please refresh and try again. 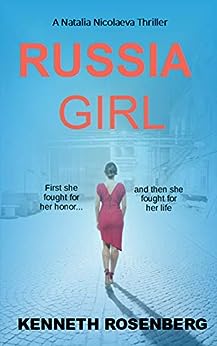 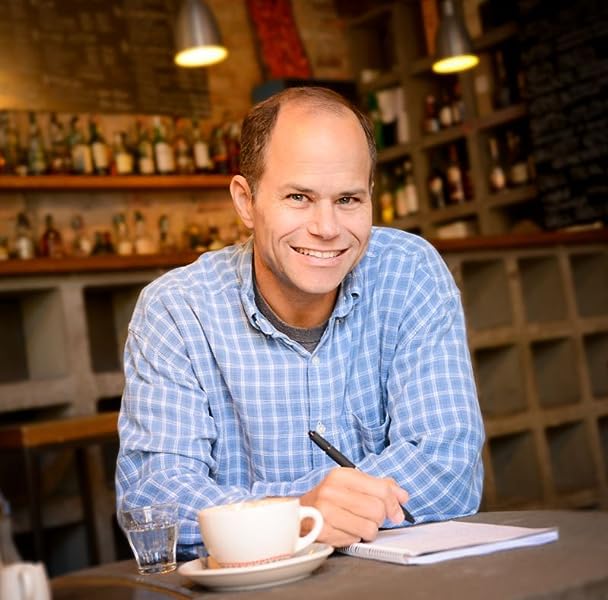 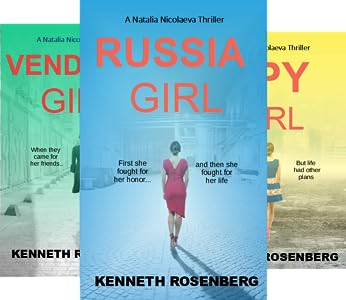 4.2 out of 5 stars
4.2 out of 5
226 global ratings
How are ratings calculated?
To calculate the overall star rating and percentage breakdown by star, we don’t use a simple average. Instead, our system considers things like how recent a review is and if the reviewer bought the item on Amazon. It also analyzes reviews to verify trustworthiness.
Top reviews

Susan1
5.0 out of 5 stars “The Evil That Lurks in the Heart of Men”
Reviewed in the United States on May 15, 2019
Verified Purchase
This book is a great start for a new series! A story of Eastern European girls kidnapped and forced into prostitution, it is easy to believe and could very well be based on true stories. You will wonder at the desperation of women who reluctantly choose prostitution as a way to pay the bills, but the women and girls who are forced into it by men who use them to make money is truly heartbreaking.

Natalia is a not-so-simple farm girl, who is tricked into prostitution and watches her friend die from the abuse of the men and women who enslave them. This is a raw and brutal story of lives, innocence, and souls destroyed. You will cheer for Natalia as she fights back. A very thought-provoking and engrossing read!
Read more
15 people found this helpful
Helpful
Comment Report abuse

Brick
VINE VOICE
4.0 out of 5 stars Russia Girl - Tough Young Lady
Reviewed in the United States on January 14, 2020
Verified Purchase
When I began reading Russia Girl, it didn't flow well off the page, it was very slow, and it had a bland beginning. But as I continued reading, I appreciated what the author was doing. He was building a foundation for the protagonist Natalia. The author wanted us to get an idea of where she came from, the people she loved, and the sacrifices she was making for her family. But in building this character, I do feel as though something was missing. Her voice didn't truly stand out a lot of times, even though the story was centered around her.

But, admittedly, I became a fan of Natalia because of her will to fight back and to never give up. I like how she wasn't the damsel in distress. She was determined to win on her own terms. The odds were against her, and there was a couple of things that made me shake my head, but like I said, it was the never giving up part that won me over. There were heartbreaking moments. I almost cried, but Natalia used it as fuel for her anger. She was a tough young lady.

When it comes to grammar, the story needs more editing. There were missing words and phrases that need to be reworked so it'll flow better. But overall, the story was an excellent read. Also, there were no cliffhangers.

Madelayne Robitaille
5.0 out of 5 stars Unforgettable story
Reviewed in the United States on May 5, 2019
Verified Purchase
Human trafficking is a plague, it preys on vulnerable girls and turns their life into hell on earth. But sometimes, a girl refuses to submit, this is the story of one of them. Natalia, like so many before her, is seduced by the promise of a better life but soon realises that her dream will be forever shattered if she accepts her destiny. The author has created a credible character here, she is not a super heroine, she is a girl who decides to get her life back whatever the means. I can't wait for her next adventure .
Read more
7 people found this helpful
Helpful
Comment Report abuse

Vicky Kae
5.0 out of 5 stars Good Survival Story, though Violence Involved
Reviewed in the United States on December 5, 2019
Verified Purchase
Story involving stereotypical Russian female being tricked into a life of illegal activities in a foreign country with no easy way to escape. Upon escaping with the help of a friend who has become entwined in the horrible side of the sex trade, the heroine returns home to attempt to defend her family against the repercussions of her actions against her mob-like kidnapper. Due to the kidnapper's vengeful actions against her family, the heroine returns to take matters into her own hands after being mentored by a compatriot of her kidnapper's. An excellent start to what should evolve into a saga that captures the reader's interest and keeps them wanting more.
Read more
One person found this helpful
Helpful
Comment Report abuse

Jennifer Anderson
5.0 out of 5 stars Wow
Reviewed in the United States on December 4, 2019
Verified Purchase
This was an incredible read. I couldn't put it down. Read it in one night. Liked it so much, I immediately bought the next book. This is about how a young lady gets tricked into human trafficking and her fight out of it. Small spoilers; the parts describing the things she went through while forced to prostitute herself made me cry, but it still was glossed over a bit. I'm sure they could have gone into some gruesome details and really made the reader feel it. As it is, it still made me feel for the young women in this situation. I can't even imagine.
I love it when I find a book/series that grips me. I look forward to having more of Natalia. She kicks a**!
Read more
One person found this helpful
Helpful
Comment Report abuse

Mary Apodaca
4.0 out of 5 stars Sold into slavery
Reviewed in the United States on September 19, 2019
Verified Purchase
Didn't think I would care for this book, but found it easy to slip into.
The characters personalities quickly became identifiable, drawing the reader into their lives.
Russia Girl shares her life as a hard working farm girl who desires adventure, and then her life as one tricked into sex slavery & her daring escape.
Read more
3 people found this helpful
Helpful
Comment Report abuse

Lee
3.0 out of 5 stars Attention Getter
Reviewed in the United States on January 30, 2020
Verified Purchase
Holds your attention throughout! Lots of action and of course, violence! You root for the heroine although a bit unbelievable that a young woman could do all that damage!
Read more
3 people found this helpful
Helpful
Comment Report abuse

MJC
VINE VOICE
5.0 out of 5 stars An incredible story about human trafficking
Reviewed in the United States on August 22, 2019
Verified Purchase
I loved this book. Natalia, a smart young woman, takes a job out of the country. she is kidnapped and forced into trafficking. She is determined to survive and manages to escape. Her struggle is unfortunately, all too real in today's marketplace. Girls (and boys) are kidnapped off the streets, and bought and sold like a meat market.
I applaud this author for having the courage to show us how these despicable criminals operate. Encouraging awareness of this evil helps to eliminate this threat. Well done.
Read more
One person found this helpful
Helpful
Comment Report abuse
See all reviews

Ray Burston
4.0 out of 5 stars A harrowing tale of what can happen to a naive young girl
Reviewed in the United Kingdom on September 12, 2019
Verified Purchase
'Russia Girl' takes the reader on an often harrowing journey into one young girl's unwitting descent into sexual slavery. With a credible cast of villains and accomplices, as well as descriptive settings and places, the author reveals to us how she then manages to turn the table on her captors and wreak her revenge. A superb, if sobering read.
Read more
2 people found this helpful
Report abuse

Dave Kindle Customer
5.0 out of 5 stars Don't blink you will miss something.
Reviewed in the United Kingdom on January 19, 2020
Verified Purchase
A fast past page turner , 1st in a series that looks promising. It enters the land of dreams that hooks girls only for that dream to be destroyed within days but too late to escape they become someone's property to be sold for sex.
Our heroine faced with the impossible decided not to give in but fight and not (well girl actually) does she fight. From the life of a simple farm girl (person) she is forced into a world that far too many have found themselves entrapped, & unfortunately they have a different outcome Natalia will see her life transformed all innocence gone but you need to read to find out as it's better that way and this is a great read. Well worth five stars in my view.
Read more
Report abuse

glynis150454
5.0 out of 5 stars A great read
Reviewed in the United Kingdom on September 18, 2019
Verified Purchase
An excellent book. I downloaded it to read on holiday. I started it on the plane and had finished it by the end of day one.
I recommend this book and after reading a chapter of the second book I have downloaded that too.
Read more
2 people found this helpful
Report abuse

Snowy the barn owl
5.0 out of 5 stars Good
Reviewed in the United Kingdom on December 5, 2019
Verified Purchase
I enjoyed this book it’s part of someones true story at the beginning then after a while it’s made up to make a interesting book. It’s about a farm girl wanting a better , more exiting life than working on a farm in a small quiet town, Natalia,s friend Sonia talke her into leaving to work as a waitress in Italy after a woman offers them a job and sells them into prostitution. Natalia escapes then goes back home, toasts when things start to happen
Read more
Report abuse

Kindle Customer
5.0 out of 5 stars Good opening story of revenge
Reviewed in the United Kingdom on July 24, 2019
Verified Purchase
Throwing caution to the wind Natalia seems her fortune abroad only to find herself trapped in a horrific hell. Extremely fast paced and exciting tale I really enjoyed reading
Read more
One person found this helpful
Report abuse
See all reviews