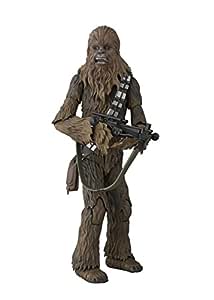 Brand: Bandai
Platform : No Operating System |
Rated: Everyone
4.8 out of 5 stars 16 ratings
Available at a lower price from other sellers that may not offer free Prime shipping.
Only 1 left in stock - order soon.
FREE delivery: Thursday, Nov 5 Details
Fastest delivery: Wednesday, Nov 4 Details
Sold by JAPAN ENTRANCE and Fulfilled by Amazon.
New (11) from $249.51 + FREE Shipping

4.8 out of 5 stars
4.8 out of 5
16 global ratings
How are ratings calculated?
To calculate the overall star rating and percentage breakdown by star, we don’t use a simple average. Instead, our system considers things like how recent a review is and if the reviewer bought the item on Amazon. It also analyzes reviews to verify trustworthiness.

Graham SwearingenTop Contributor: Action Figures
5.0 out of 5 stars Bandai's S.H. Figuarts Star Wars Episode IV: A New Hope Chewbacca
Reviewed in the United States on May 14, 2017
Verified Purchase
Another fantastic release from Bandai's S.H. Figuarts line, here we have Chewbacca as seen in Star Wars Episode IV: A New Hope. I've been collecting this line for awhile, I am a fan. After getting the fantastic Han Solo released a few months back, I was eager to get his Wookie companion. This is easily the best Chewbacca figure in this scale that I've gotten, the sculpt, the detail, the paint, this figure is fantastic on its own and also as a great companion figure to the Figuarts Han Solo. So, what's in the box?

So we get all the essential Chewie accessories, I'd have liked if they had included a face plate with Chewie sporting his parted hair as seen in Empire and Jedi, then the wouldn't really need to release another Chewbacca figure for the later Episodes. Oh well, the two faces we get here are great. The neutral face is spot on, it looks like a person in a mask, it looks like Peter Mayhew in his Chewbacca suit, it's great. The roaring face is sculpted well, there's great detail in the open mouth, the teeth and tongue all painted well. The faces on both of my face plates were printed clean and in place. The figure overall has great paint apps, the color patches of fur all blend in nicely. The bandolier over his shoulder and the satchel bag connected to it are sculpted and detailed really well. The bits of silver accents all over the bandolier is a great touch.

The articulation on this figure is really good. While getting the hands on and off can be a pain, and getting the trigger hand on and off the Bowcaster can also be a pain, that's really all there is to complain about. The fur on the back of Chewie's head has articulation, so you can lift it like a skirt to allow you to pivot his head to make him look up without the sculpted fur hindering movement. It's hidden well on the figure, as is the shoulder and hip joints that are hidden by floating sculpted pieces. Oh and boy how I love the sculpted knee joints, why did this take so long to finally happen? It doesn't matter, it finally happened and it's great. If only they had followed through and sculpted the joints on the back of the knees... baby steps. Maybe by this time next year we'll have flawless articulation, because they're nearly there.

Whether you're a huge Chewbacca fan or a massive Star Wars action figure collector, or if you've been collecting this line in particular, this is a must have. For $60 you can't go wrong here, the Bowcaster can go over Chewie's shoulder nicely, or fit in hand ready to blast through some Stormtroopers, you won't have any trouble getting this figure into any Chewbacca type pose you want to. I'm glad to finally have this figure in hand, it met all my expectations and then some, I wasn't prepared for how smooth the joints were going to be, how much detail in the sculpt and paint there would be, pictures don't do it justice. This figure comes FULLY APPROVED.

Pen Name
5.0 out of 5 stars Great figure
Reviewed in the United States on January 29, 2018
Verified Purchase
This is simply a classic, S.H. Figuarts surpasses in detail what other 6 inch figure lines have achieved. Price point is what you would expect from that as well. Debate that then choose to buy it. I did and I am enjoying this figure. More hand or face options would have been totally acceptable in my opinion.
Read more
Helpful
Comment Report abuse

Ashley Mooney
5.0 out of 5 stars Fun Collectible
Reviewed in the United States on May 28, 2018
Verified Purchase
Perfect! I love the sculpting and pieces for this figure. He's a great height with the other Star Wars Figuarts next to him. Very fun, cool collectible to have.
Read more

Ben N.
4.0 out of 5 stars Nice wookie.
Reviewed in the United Kingdom on October 10, 2017
Verified Purchase
This is a very nice figure, the 2 heads look spot on and they've made him as much like the one from the movie as possible. He kind of looks like a guy in a costume. A few of his joints could have been better hidden for me but he still looks great and would recommend.
Read more
Report abuse

CGI
5.0 out of 5 stars Bandai's Chewbacca is the right wookiee for you.
Reviewed in Canada on August 3, 2017
Verified Purchase
Incredible detailing, colouring and accuracy! Bandai has the 6-inch figures you want. Though taller than other figures, just wish Chewie had a little more height for thoroughness sake. But, that is a minor quibble. Love it!
Read more
One person found this helpful
Report abuse

Fuji Prime
5.0 out of 5 stars 完璧
Reviewed in Japan on May 10, 2019
Verified Purchase
大きさ、造形、全てが完璧です。
これには文句なしです。