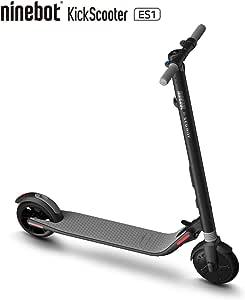 Visit the Segway Store
3.7 out of 5 stars 146 ratings
| 121 answered questions
Available at a lower price from other sellers that may not offer free Prime shipping.

The ES1 Kick Scooter is Segway's latest venture in the realm of electric scooters, putting cutting-edge technology into the classic scooter design. Weighing in at less than 25 pounds, the ES1 is one of the lightest e-scooters on the market. This electric scooter was made for urban transportation - it reaches top speeds of 12MPH, covers 15 miles on a single charge, and has been engineered to excel on pavement, asphalt, and concrete. On the sidewalk or on the road, the Segway ES1 e-scooter is the perfect balance of precision, comfort, and speed.

3.7 out of 5 stars
3.7 out of 5
146 global ratings
How are ratings calculated?
To calculate the overall star rating and percentage breakdown by star, we don’t use a simple average. Instead, our system considers things like how recent a review is and if the reviewer bought the item on Amazon. It also analyzes reviews to verify trustworthiness.

Royal T.
5.0 out of 5 stars ES1 vs ES2 Comparison, this is the scooter to beat
Reviewed in the United States on February 28, 2018
Verified Purchase
I've been using this as a commuter scooter and it has me very impressed!
First to clear up some misconceptions, in researching this scooter before purchasing I found a number of reviews saying that the ES1 (as compared to the ES2) did not have regenerative breaking and could not use the booster battery, which for whatever reason I cannot find for sale here in the US. Now that I have mine, I can say for sure that it does have the regenerative electronic breaking built in, which I find preferable since it is great for keeping a consistent speed down hills, and that it does support the second battery. The actual differences between the two models are about 3mph in top speed, back and bottom lighting effects since the ES1 only has a front light, and suspension on the back as well as the front. For what is currently a $300 difference, I'd call the ES1 by far the better value. One thing to consider is the ES2 has a slightly better motor, thus the higher speeds, which would give it a bit better performance up hills. The ES1 seems to do fine for me up light grades, and I weigh about 220 with my backpack on, but struggles on most hills. It seldom drops below 8 mph even then and I can give it a little push to help out, but something to be aware of if you're approaching the weight limit on it like I am.
The scooter itself is bigger than I expected. When folded I'd say it's about as long as a good longboard, but should fit in a trunk or on transit just fine. It seems extremely durable, and so far I haven't had any problems with the latch as some people have mentioned here. It is also somewhat heavy, but I usually wheel it around on it's front wheel when possible, and at under 30 pounds it's not terrible to carry when I need to. Range is roughly as advertised, I get around two days and probably 10-12 miles of many short trips between charges. The charger is also very light, so I consider this more than sufficient. The app for the device is excellent, I recommend exploring it since there is very little documentation, but you can learn a lot about the scooter from the app settings.
That's all I've got, but if you're looking for a good "last mile" solution, I recommend this over any eboard, bike, or scooter I've seen for it's excellent handling and overall features.

Amazon Customer
5.0 out of 5 stars A GOD SEND...
Reviewed in the United States on March 22, 2018
Verified Purchase
So far I really enjoy this scooter! It is kinda heavy but not too bad, but what do you expect from a well built machine! It is pretty fast and goes up hills easily, if it’s a big hill it drops the speed a bit... but in NYC this is a god send. One thing I did notice is that you must really hold onto the handle bars if you hit a big crack in the sidewalk or else you might lose grip, and lose your scooter and bust your face, especially when your thumbs are on the brake and acceleration buttons. Sport mode is quick and agile, just watch out for people. I usually use standard mode to avoid the bursts of sport mode if I’m around lots of people. The speed tops out at 13mph and I am still testing mileage. So far I have done 4 miles and it left me with 69% battery left from 100%. I would not give this to a kid for sure, this is an adult vehicle. A very serious one that can be dangerous if you’re not careful. If you see a cop looking at you just start kicking it like a regular kick scooter like I did today when one was staring at me while I was riding it on the street.. Also, the app is great, connection is fine, and you can lock your scooter while getting groceries or whatever, I leave it inside the store but if someone touches it the app freaks out and warns you while the wheel locks up and beeps on the scooter. Pretty cool, even if you lock it and lose connection on your phone it still remains locked. So don’t lose battery life on your phone while having the scooter locked or you’re screwed.. haha. The thing is beautiful too.

I have only had if for a few days and will update my review after a few months or if anything else happens in the meantime. Enjoy!

New update:::: 8/5/2018 I bought a new one, but I purchased it from Best Buy and got the geek squad protection so I don’t have to worry if the scooter breaks down and I’m stuck with it. Now I can have it repaired anytime during my protection plan. And no I don’t work for them and they didn’t pay me to say that. FYI. Have fun!