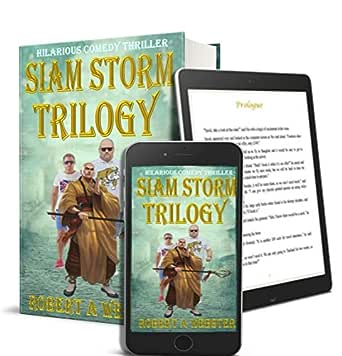 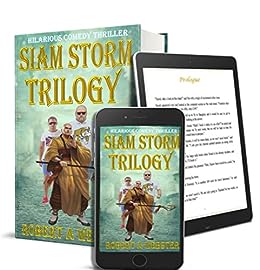 In Siam Storm, four seemingly unrelated stories cometogether in a brilliant plot with an unpredictable ending. A young man seekingrevenge from rejection, a wealthy pedophile who enjoys anything illegal, threeEnglishmen with somewhat loose morals and full pockets on holiday in Thailand,and a group of monks in an isolated village that passionately holds on to itsBuddhist traditions all merge into one story. An adventure unlike any you haveever heard, simply because you had to have been there. How often does one meetan Englishman who is convinced that his bad luck is the fault of his twofriends or a 29-year-old man just getting his first taste of alcohol and women?In a culture where sex is a lifestyle and women have no problem selling theirbodies and their time to foreigners, loyalty seems to be scarce. But not toofar away, young men dedicate their lives to defend their beliefs, even to thedeath. One such young monk, in search of a Holy Relic stolen from a secludedmonastery, slips off the path to enlightenment and is given a not-so-gentlereminder by an unlikely group. Contrasting the carefree attitude of the bar culturewith the passion and determination of the monks, Robert A. Webster's Siam Stormis a great read.

Robert A. Webster is an amazing story teller. His imagerydraws you in and engages your senses as you try to visualize the scenery.Webster's knowledge of both Thai and English idiosyncrasy is deep andimpressive. Whenever unfamiliar terminology is used in the narrative, theauthor includes footnotes with additional information that will aid you inunderstanding the plot - no need to try to figure it out on your own. The storyis easy to read and very down to earth. Many hilarious adventures are includedin the story to keep you chuckling for a long time. If you're a drinker, you'llbe reminded in certain parts of a night out with your buddies. Once you pick upthis book and start reading it, you won't be able to put it down.

Robert A. Webster is a multi-genre author based in Sihanoukville,Cambodia. Originally from Cleethorpes, UK, he embodies both hearty witand adventurous vigor, making his prose insanely memorable andincessantly enjoyable. His unique brand of snarky humour and imaginative storytelling breathe vivid life into his work, which combines comicalBritish characters with exotic Southeast Asian settings. The result is"brilliant" and "unpredictable," as Dinorah Blackman of Readers'Favorite says.

His first novel Siam Storm received rave reviews in the expat communityin southeast Asia. Its sequels, Chalice and Bimat, were similarlyacclaimed. Protector, the fourth book of the Siam Storm series,continues the journey of the lovable scallywags who have a penchant formischief. The books document high-octane escapades and colourful,fantastical narratives that don't stop.

His other hilarious novels include Fossils and Spice, and his journeyinto the Paranormal genre with PATH and Next makes him an adaptableimaginative writer.

When he's not crafting unforgettable stories, he enjoys snorkelling, self-deprecating humour, and the warm climate of Cambodia.

Sara Pipinich
5.0 out of 5 stars Fantastic book!
Reviewed in the United States on April 27, 2015
Verified Purchase
Great characters and a great story. A real feel good read. Everyone who enjoys a good comedy adventure should read this. Set in exotic locations around South East Asia. The author made it easy to imagine and the calamitous adventures by lovable English rogues made me cry with laughter.
Read more
Helpful
Report abuse

Chrissy C
3.0 out of 5 stars Siam Storm - Trilogy
Reviewed in the United States on January 20, 2014
Verified Purchase
The writing style took a bit of getting used to and the spelling and grammar errors irritated me (is there no proof-reader?) but having said that, the books sucked me in and I found i just kept reading. Entertaining and I learnt quite a few facts previously unknown about South-East Asia.
Read more
Helpful
Report abuse

andrew shaw
5.0 out of 5 stars hard to put down
Reviewed in the United States on July 3, 2013
couldn't put this down when I started to read. Not only is it a great adventure but also funny and informative around a different culture.I would highly recommand this Trilogy for a Holiday read. Siam Storm (A Thailand holiday adventure)Buddha'S Tooth
Read more
Helpful
Report abuse
See all reviews

Bricorn
4.0 out of 5 stars A fun book
Reviewed in the United Kingdom on August 28, 2013
Verified Purchase
First off, let me say that I've been to some of the cities in which the book is set so, while they are exotic, I can attest to the accuracy with which they're portrayed. The fictional places are, of course, fictional, but are believable if you've ever been to that part of the world. They "fit".

This was a strange read; the book didn't really seem to know what it was. Thriller, Detective Story, Travelogue, Science Fiction, Fantasy??? There were elements of all of these in it.

What it was though was an entertaining read, it'll never qualify as great literature (and doesn't pretend to), but I had trouble putting it down and got through the trilogy over 4 evenings. There were good guys, bad guys, confused guys, idiots and wise men..... I could visualise all of them and it seems like I've met some of them in real life, they were that real to me (especially the idiots unfortunately!).

I got this as a free download and enjoyed it enough that I'm looking to buy other books from the author.