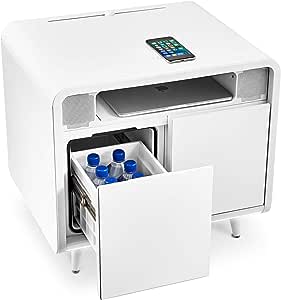 by Sobro
3.8 out of 5 stars 14 ratings
Available from these sellers.

3.8 out of 5 stars
3.8 out of 5
14 customer ratings
How does Amazon calculate star ratings?
Amazon calculates a product’s star ratings based on a machine learned model instead of a raw data average. The model takes into account factors including the age of a rating, whether the ratings are from verified purchasers, and factors that establish reviewer trustworthiness.

Ben Jackson
5.0 out of 5 stars Absolutely incredible! Trust me, you need this table in your life.
Reviewed in the United States on February 21, 2020
Color: White/WhiteVerified Purchase
Ever since it was announced, I’ve wanted the Sobro Side Table. They’ve packed an incredible number of features into a single table, and they all combine to produce a truly stunning piece.

It’s perfect as an end table in your family room – but perhaps, it works even better as a nightstand. I can’t tell you the number of times I’ve woken up and wanted a cold drink. Instead of having to actually get out of bed (especially when you’re tired, or it’s cold) the convenience of having the cooler drawer is an absolute game changer.

Wireless charging makes a ton of sense for a table as well, considering most newer model phones support Qi charging. Instead of fumbling with cords, I simply set my iPhone on this table and know that it’s charging.

Perhaps one of the more underrated aspects of this table are the LED lights. There’s an LED light strip both on the rear, and the front of the table. The rear light can be changed to virtually any color, whereas the front one can be changed but is limited to varying degrees of white. What’s amazing though, is you can use the mobile app to set the front light to motion-activated. While it might sound unnecessary, if you’re using it as a nightstand in a dark room, that little bit of light can be clutch if you’re getting up for any reason in the middle of the night. Did I mention that it has a built-in alarm clock function, and can also play music via bluetooth?

PROS
+ Cooler drawer means cold drinks, wherever you have this table
+ Wireless charging, power outlets, USB outlets – it’s ready to charge anything you need
+ LED lights are amazing
+ The top slot is perfect for storing books, your iPad, or anything else you want to quickly access
+ Quality of the table is rock solid

CONS
+ Wish the front light could be configured with more colors, similar to the back
+ Currently, no voice command/smart speaker support. I’m sure they’re considering this for the future though. Would love to be able to say "Hey Alexa, set the Sobro alarm clock for 6am"
+ At times, the mobile app isn't as responsive as I'd expect. Typically not an issue though.

Would absolutely recommend this table as an addition to your home. I already want to buy another one.

lanik fears
1.0 out of 5 stars Cool concept but doesn't play nice
Reviewed in the United States on May 28, 2020
Color: White/White
This table in concept is cool as hell. I bought it for the game room and really looked forward to using all the features of the table during long gaming sessions. However, this table interferes with nearly every other wireless device in the room. Xbox controllers drop nonstop and even the IR remote for the TVs get messed up by the table. It's to the point that we unplug it when we start gaming and have to remember to plug it back in after we finish. The only feature we end up using is the refrigerated drawer. Really disappointed in this purchase. In retrospect, I wouldn't recommend this table if you have any other wireless devices in the same room. If your house is anything like mine, then don't bring it home.

Edit: Sobro warranty support is only available by email and stopped communicating after a single reply email. I can't recommend this product to ANYONE. If you are considering this kind of table, you probably have a bunch of wireless devices in your house. This table will bend all other wireless devices over the table and bring your "smart" house to its knees. It looks cool, but its a mess of electronic interference.
Read more
30 people found this helpful
Helpful
Comment Report abuse

JoshH
5.0 out of 5 stars I love the Sobro Side Table!
Reviewed in the United States on April 10, 2020
Color: White/WhiteVerified Purchase
I am so excited about my Sobro Side Table. This table is everything I could have dreamed of! My bedroom is always full of wires and adapters for all of my devices. This table allows me to charge my phone via the Wireless Charging Pad on the top. It’s so convenient and easy. My wife’s favorite part of the table is that it has a cooler drawer. As we have young children, this allows us to store drinks next to the bed for their next feedings. We do not need to go downstairs to the fridge anymore to grab it. I also love to have cold water in my bedroom at night. My older child LOVES the lights on the table. She loves to be able to change the lights and have a dance party before bed. It’s a fun way to unwind at night. The table is great quality and a nice compact footprint, it doesn’t take up too much space. I am planning to buy another one so we can have another table on the other side of our bed. The sound quality of the speakers do not disappoint. It’s an amazing all in one side table! Additionally, when I first received the table, I connected the app and it was very easy to connect. The functions are easy to navigate and I have no complaints with it. I highly recommend this table.
Read more
8 people found this helpful
Helpful
Comment Report abuse
See all reviews from the United States