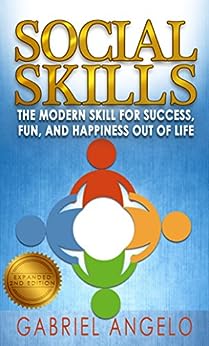 3.6 out of 5 stars
3.6 out of 5
16 global ratings
How are ratings calculated?
To calculate the overall star rating and percentage breakdown by star, we don’t use a simple average. Instead, our system considers things like how recent a review is and if the reviewer bought the item on Amazon. It also analyzes reviews to verify trustworthiness.
Top reviews

DKAlpha
4.0 out of 5 stars A Good Basic Guide For Developing Social Skills
Reviewed in the United States on February 10, 2015
Verified Purchase
As I sat down to read, “Social Skills: The Modern Skill for Success, Fun, and Happiness Out of Life,” I was admittedly apprehensive, as a student of Social Psychology I have read other books on the same topic and was afraid this book was trying to reinvent the wheel. My mind was put to rest as this book was not an attempt to reinvent the wheel, but rather an in depth explanation of the wheel and all it's parts.

What scares me is that while I think most of the skills are common sense, everyone should know this, I look around my community and see evidence that this belief couldn't be further from the truth. I live in a rural farming community with high unemployment, low literacy, an obscene amount of drug addicts and alcoholics, and a startling poverty rate. I am hard pressed to decide if these circumstances led to the lack of social skills or if the social skills were always lacking and led to the circumstances.

Social media, in my opinion, has hijacked the social skills that were once prevalent in Western society. There is a cover of anonymity, a feeling that if you can't see the person your disrespecting face to face then it doesn't really matter. Social battles have been waged in every way imaginable, and once private discussions have become fodder for the whole world to see. For evidence all you need to do is look at a local news story about a hardship someone is facing and I guarantee there is always at least one socially inept person making ignorant and usually hateful comments toward the person(s) or groups. Why? Because they are protected by the computer, they don't have to face the body language, the voice, the feelings, the person one on one. While my “common sense” social background would find it appalling to air a serious disagreement with my boyfriend in public for fear of embarrassment to both of us, social media addicts have no such common sense and social pitfalls are on the rise. This is why books like “Social Skills” are needed now more than ever before.

“Social Skills,” could be a tool in aiding readers in developing social skills they may lack. Parents, teachers, employers, and community outreach organizations can use the book to educate the people they come in contact with. Instead of focusing on standardized testing that assumes a one size fits all learning curve, schools should be a place where children and teens learn social skills that will serve to better their lives in terms of continued education, future employment, interpersonal relationships, and in diverse social settings.

This book has great focus that explains the importance of skills such as: embracing diversity as world cultures meld together, the difference between professional and casual/personal social skills, the value of eye contact and body language in communication, and how social skills develop over a lifetime. I was delighted to see a focus on the topic of diversity especially. Technology has allowed cultures of the world to melt together. As a child I was excited if I met anyone from a different state in the United States. The occasional Canadian wasn't out of the realm of possibility or even the Mexican family that moved in next door. That was as diverse as my culture got. Today, I have friends who are German, Russian, Australian, French, Indian, Chinese and a host of other countries. Each of them bring their own cultural, religious, and traditional heritage with them. Having social skills in this new small world of ours is vital as diversity becomes a part of our daily lives.

As I think about the importance of listening as one of the most important aspects of being social savvy I can't help but think about the Verizon “can you hear me now,” commercials. Hearing is one of the most important skills a person can have and sometimes technology just gets in the way. Cell phones have introduced a need for a whole new set of social skills. I once had a friend who drove me up the wall by calling me while she was sitting in the drive through line at McDonalds. She'd tell me, “hold on I have to order,” then a few minutes later as she's paying,I hear her say to the cashier, “hold on a minute I'm trying to listen.” I feel like this is unacceptable rudeness not only to me but the staff as well. They are trying to do their job and the longer they take with her because she's on the phone the more impatient the people behind her become. Sometimes we just don't understand that our lack of social grace has ripple effects on people we don't even know. I have a sign on my door that says, “I don't mean to interrupt people, I just randomly remember things and get excited.” This has been my downfall over the last 3 years or so. Long story short, I had an event in my life that caused oxygen deprivation to my brain and as a result my short term memory isn't as good as it used to be. While I have a medical reason for this problem, it is still a social mistake that gets me in trouble. People don't know, and frankly don't care, about the medical reasons when you interrupt them. This seems like basic information, but I see it time and time again with people who just want to put their two cents in. If you are interrupting somebody they can interpret that as not listening to them and that is a social hurdle that can have serious consequences if one cannot control the impulse to interrupt.

As I said this is a book that could be a valuable tool, however, it shouldn't be the only tool. While there is a great explanation of all the topics, this book is quite clinical in nature. I found myself drifting back to my Social Psychology course work often. I would have liked to see activities that could help the reader develop social skills, perhaps some examples, or a step by step guide to developing each skill with an outline of goals to help the reader achieve the goal of better social skills. Perhaps even a self assessment activity of some sort. The tips and plans in the second half of the book are great but generalized and seems to not take in account that there are variables that make achieving better social skills a bigger, less straight forward hurdle for some people.
Read more
3 people found this helpful
Helpful
Report abuse

I have read other reviews that said this is common knowledge... and I suspect that person only read part one. Part one discusses why we need to be social, what social skills are and what the causes for poor social skills are. And yes, most of this part IS common knowledge... but it is necessary to include. Not all people know this stuff... as weird as that may sound... (those might be the people I will go out and buy this book on audio for!)... so it's absolutely imperative to include it... and it only makes this book even better as far as I am concerned. I think the author does a really awesome job of laying out the book, it takes you from A - Z in learning about Social Skills.

What I found was interesting is it made me realize that sometimes I may be being perceived the wrong way, which is causing unintentional stress in my relationship... all because of the way I come across when I am in pain, then they react to what they perceive is an attitude from me, and the ball is rolling.... all social skills. By saying first off ... "I am in pain, so I am so sorry if I come across as bitchy" ... I have eliminated all the fighting in my house.

This book is a lot more than just that.... this is just what I got out of it on my first read. And yes, I said first read... because like How to win friends and influence people... this is a book I need to get a hard copy of and reread over and over again. It's like a vaccination for your brain, heart and soul... you just gotta read books like this one every now and then to put life into perspective.

I would recommend this book to anyone and I already am!
Read more
5 people found this helpful
Helpful
Report abuse

Amelia Wallace
5.0 out of 5 stars Great Resource on Developing Social Skills
Reviewed in the United States on July 28, 2014
Verified Purchase
Developing social skills may not necessarily be easy for some people, but this book is a great resource for helping the introvert get out of their shell. As a former introvert myself, I realize that it takes time and practice to develop the right social skills to thrive in today's reality. I don't consider myself a full extrovert---in fact I'm somewhere in between an introvert and an extrovert---but I still found some useful information from Gabriel Angelo's book. The author nailed it on the head when he said that by nature humans are social creatures---we thrive on the social interactions we experience.

Overall I thought this book was useful and a good resource for anyone wanting to brush up on their social skills or develop their skills better.
Read more
3 people found this helpful
Helpful
Report abuse
See all reviews
Back to top
Get to Know Us
Make Money with Us
Amazon Payment Products
Let Us Help You
EnglishChoose a language for shopping. United StatesChoose a country/region for shopping.
© 1996-2021, Amazon.com, Inc. or its affiliates