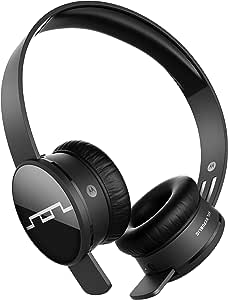 Visit the SOL REPUBLIC Store
4.0 out of 5 stars 490 ratings
| 132 answered questions
Available from these sellers.

Two brands, one commitment - deliver incredible music experiences to everyone. Tracks Air fuses the sound and style of SOL REPUBLIC to the cutting edge technology of Motorola. On the road or roaming the home, Tracks Air delivers wired sound wirelessly, with a range of up to 150 feet. Powered by wireless A2 Sound Engines, Tracks Air provides powerful sound with clear highs and detailed deep bass. Like all SOL REPUBLIC Tracks headphones, Tracks Air features interchangeable PowerTrack headbands so you can swap the color of your headbands with ease. Incoming call? Take it on Tracks Air. Seamlessly switch from playing your tunes to talking to your friends with our crystal-clear noise reduction dual microphones. You'll be listening to your music or taking calls in seconds with EasyPair Bluetooth and NFC compatibility. Get 15 hours of playtime!

4.0 out of 5 stars
4 out of 5
490 global ratings
How are ratings calculated?
To calculate the overall star rating and percentage breakdown by star, we don’t use a simple average. Instead, our system considers things like how recent a review is and if the reviewer bought the item on Amazon. It also analyzes reviews to verify trustworthiness.

Tank
1.0 out of 5 stars Amazing sound, when they work...
Reviewed in the United States on August 1, 2017
Verified Purchase
Just like my original Sol Tracks v10s, I was amazed by the full sound produced at any volume with no sound difference. The sound engines are big and high quality. The headphones have a wonderful power on introductory sound that displays the full range of sound and gives a power estimate, but it's a bit lacking. A full charge gives over 13 hours of play, and the headphones tell you there are more than 13 hours of play for quite the while, until it surprises you by saying there are over 10 hours of play left, then over seven hours of play left. I wish they had taken the time to add audio ques for the other hours - 13 recordings couldn't have been that much more difficult to record. At 10 hours on the first charge, the left ear went out for a bit. It continued a few times during 10 hours and seven hours until I had to scoot the left sound engine down when it powered on and said to be sure the sound engine was properly installed. It actually told me that. It only has to be touching the silver sliders to be properly installed though, and on the first charge, I really don't see it having to be cleaned off like some of the other reviews said. I was highly disappointed and I'm betting this fault is why the Tracks Air are no longer advertised on the Sol Republic website. I had to return my pair and go back to my original wired pair while I look for another wireless replacement.
Read more
5 people found this helpful
Helpful
Report abuse

Wendy Perez
5.0 out of 5 stars Best Headphones Once I Figured Out How to Adjust Them
Reviewed in the United States on April 14, 2018
Verified Purchase
I've had these for 14 months but I don't like to review electronics until I've used the item a lot. The sound quality is crystal clear and crisp; I test sound quality listening to Pink Floyd. If I can hear the triangle, I know I've got good sound.

It's comfortable on my head but if I'm wearing the headset AND sunglasses, I start to feel the pressure of the glasses behind my ears after an hour or so.

They look mad cool and I feel like a rock star wearing this headset.

Fully charged, I get 13 hours out of it. I only recharge when I'm down to about three hours, and then, it takes only several minutes to get me back up to 13 hours.

When I first got these, the left headphone (Sol Republic calls it something else and I can't remember what word they use) kept cutting out. It was frustrating as all get out. I'd have to tap on it, jiggle it, to get the music to play again. I was almost at the end of my rope with it but never got around to calling Customer Service to get a replacement. I finally went on YouTube to see if I could find the solution, and nothing I saw helped. I finally figured it out and it was so simple, I could've smacked myself for not doing this right away.

The headphones slide up and down on the band. You have to make sure you have a snug fit on the TOP of your head so that the band is touching the top of your head. I simply needed to slide the speakers/whatevers a smidge to get a nice, tight fit and the problem completely corrected itself.

I use these in the gym and I sweat A LOT. I wear them when I'm lifting weights, running, or cycling at the gym (I wouldn't wear these cycling outdoors cuz, ya know, cars and stuff).

I am super happy with my Sol Republics and if you're having a problem with that left speaker, adjust so that the top of the headphone is right on your head and you'll be fine.

C. J. Gerhardt
2.0 out of 5 stars This makes me sad...
Reviewed in the United States on May 9, 2017
Verified Purchase
I LOVE the fit, sound quality, and innate noise-blocking abilities of these headphones... but the left ear cuts out. You see, my first pair finally gave up the ghost... about a year after purchasing the left ear began cutting out. I tried everything I could but it failed. Then I read that it was an all too common occurrence with them. The two companies responsible for the headset parted ways, but you could still find a few of them for sale... so I decided to give it one more try. I got this red pair that you see in the photo delivered to my home, opened the box, and tested them. The sound was cutting out instantly in the left ear. Yes, I tried the headphones with other audio devices and the results were the same. So sad, disappointed because they were good headphones. Amazon took them back on return with no problem, no fuss.
Read more
3 people found this helpful
Helpful
Report abuse

Terry
5.0 out of 5 stars Great sound, battery life and comfort
Reviewed in the United States on May 12, 2015
Verified Purchase
I purchased these primarily for use at work and on flights. After about two months of use I have been very pleased with this purchase and they have exceeded my expectations by quite a bit.

Design:
As with other SOL headphones, these headphones are composed of three pieces: the band and the two ear muffs. The ear muffs detach from the band, which is great for travel. You can stuff the two ear muffs in smaller pockets of your bag, and since the band is so sturdy you can just toss it wherever you have room. When you need to use the headphones, you simply slide the ear muff pieces on the band and you're set. The buttons are pretty conveniently located on the ear muff. It takes a bit of time to be able to recognize each button without looking, but after you get the hang of it, it's simple to adjust volume, play/pause music, and turn the headphones on and off.

Battery:
The battery life on these things is probably my favorite feature. The product description says 15 hours, and I believe this is accurate, although I've never gone through a full charge...they just last so long. When you turn on the headphones, a voice tells you the amount of battery remaining (in terms of hours), which is handy.

Sound:
To be fair, I'm not an audiophile, but I've been very happy with the way these sound. I use them to listen to music that ranges from rock to hip hop to EDM, and I don't have any complaints. The bass feels powerful, vocals sound crisp, I don't think there is anything about the sound that I would complain about. I also use these to listen to podcasts and audio books. I don't have trouble hearing spoken words in normal environments, although on airplanes I did need to turn the volume up pretty high to hear some words clearly. That's mainly a byproduct of the over-ear design of the Tracks Air, I think.

Bluetooth Headset:
These can be used as a Bluetooth headset as well, which has been a surprisingly handy feature for me. I don't have any problem using these as a headset when I'm indoors or in a car. They don't work great when it's windy outdoors however, and unlike a Bluetooth earpiece, you can't really put your hand over the mic to block out wind noise. People I've spoken to on these knew I was using some sort of a headset, but no one thought that it was noticeably worse than other Bluetooth headsets I've used.

Comfort:
The two ear muffs are adjustable, which really helps to make the Airs more comfortable. I wear a cap sometimes, and the ability to adjust the ear muff pieces is helpful to make sure that the Airs are always securely on my head. The padding around the ear muffs is adequate, and they remain comfortable after a full work day's worth of listening. The ear muff pieces are quite small however, so they don't fit completely over my ears - not a big problem so far for me.

Overall:
I've been very happy with this purchase. I considered wireless Beats that were a hundred dollars more, or so, but I'm happy I decided to try out the Tracks Airs first. The two killer features on the Tracks that really separate them from other headsets I've used are the detachable ear muffs and the battery life.
Read more
2 people found this helpful
Helpful
Report abuse
See all reviews

Amazon Customer
3.0 out of 5 stars Bluetooth stopped working
Reviewed in the United Kingdom on June 11, 2018
Color: GunmetalProduct Packaging: Standard PackagingVerified Purchase
I bought these back in July 2016 they have been amazing until recently the Bluetooth has stopped connecting...have tried everything and still not working! Not great considering there only a year and half old...?
Read more
Report abuse

Jeremy
5.0 out of 5 stars Beautiful sound
Reviewed in the United Kingdom on April 28, 2014
Color: GunmetalProduct Packaging: Standard PackagingVerified Purchase
Expensive but worth every penny. Lovely rich sound. The range is good but there can be occasional interference when my phone is in my pocket
Read more
4 people found this helpful
Report abuse