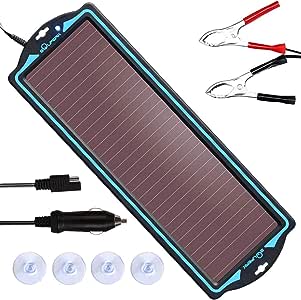 Brand: SOLPERK
4.2 out of 5 stars 501 ratings
Amazon's Choice recommends highly rated and well-priced products.
Amazon's Choice for "12v solar battery charger"
Available at a lower price from other sellers that may not offer free Prime shipping.

The battery as an energy storage device is an important part of the DC power supply system. The battery can be used in cars, motorcycles, ships, ships, recreational vehicles, trailers, electric sports, snowmobiles, etc.

4.2 out of 5 stars
4.2 out of 5
501 global ratings
How are ratings calculated?
To calculate the overall star rating and percentage breakdown by star, we don’t use a simple average. Instead, our system considers things like how recent a review is and if the reviewer bought the item on Amazon. It also analyzes reviews to verify trustworthiness.

Amazon Customer
5.0 out of 5 stars Melted in Texas heat.
Reviewed in the United States on September 10, 2019
Size: 1.8W AmorphousColor: BlackVerified Purchase
It worked well for tendering the battery. Now I live in Texas, and we have extreme summers. I had it mounted inside the car, and it completely melted the plastic around the panel. It actually melted to the point that it no longer works. I’m a little disappointed, I felt as tho something designed to sit in the sun should handle this type of heat.
Read more

foxposte
5.0 out of 5 stars Working great!
Reviewed in the United States on August 26, 2019
Size: 9W AmorphousColor: WhiteVerified PurchaseEarly Reviewer Rewards(What's this?)
I have another solar battery charger that I bought at Harbor Freight, which came with a battery. I managed to run into it with the front of my car--my advice is, put stuff like this high enough that you can see it. So I thought I'd try this, but was worried it might not do the job, because it is smaller. I have had it charging the battery from Harbor Freight, which I wasn't sure was still good, because I hadn't charged it for at least a month, kind of ignoring it, while I kept my camper battery charge. So I hooked up the SOLPERK solar panel let it charge for about three days, or so--we're getting intense sunshine in central Texas, so it didn't lack for sunpower.--Then I tried my volt-meter to see whether there was a charge. The battery is fully charged. I'm happy so far. I like the size--it will be easier to take with me in my camper, and pull it out to use whenever I need it. I can't comment on how durable it is, as I've had it for no more than a few weeks, with no rain. It is simple to put together; it is so easy, because there is only the panel, and cords to plug together, in a way that is obvious you hardly need instructions, as long as you know that with batteries, red is positive, black is negative, and you attach the black clip to the black pole and the red clip to the red pole. You can move the panel from time to time to better catch the sun, but I'm generating far more than I need as it is, with the solar panel just facing mostly southeast. The price is very reasonable; I'm probably going to buy another one for my other camper. I'm impressed at how solar-generated electricity really works! My car battery was dead, from accidentally leaving the camper-trailer plugged in to the car overnight--don't do that! A neighbor with a long extension cord plugged his huge charger up to the battery for about ten minutes, and essentially nothing happened. He gave up; it was really hot out. He thought it was dead. So I hooked up my other solar panel to the battery & placed it flat on top of the car, and left it through the afternoon and overnight. The car started up immediately in the morning! So, yes solar electricity is effective and free (if you can take care of the electric panel) and with reasonable care should work indefinitely.
Read more
8 people found this helpful
Helpful
Comment Report abuse

M. J. Glauser
5.0 out of 5 stars Great for keeping a big batt bank charged while waiting to go camping.
Reviewed in the United States on August 6, 2019
Size: 30W AmorphousColor: WhiteVerified PurchaseEarly Reviewer Rewards(What's this?)
Even in cloudy weather I still get enough charge to keep my batts topped off so I don't need to keep the trailer plugged in all the time. Keeping it plugged in can cause the electrolyte to evaporate faster. This panel provides big enough charge to keep the batts up, but so much as to boil out the water.
Read more
26 people found this helpful
Helpful
Comment Report abuse

Amazon Customer
5.0 out of 5 stars Great product. No complaints.
Reviewed in the United States on July 13, 2019
Size: 1.8W AmorphousColor: BlackVerified Purchase
Simple connection to battery. Suction cups work well to attach panel to the windshield or whatever.
I have three of these.
One for my motorcycle, my dump trailer and my crane truck. I’ll be purchasing more for a couple of my tractors.
All work very well.
Nothing worse then going to get a machine or piece of equipment and having a dead battery. I don’t have to worry anymore with these solar chargers hooked up.

Ann Smith
5.0 out of 5 stars Great invention. Super easy to use!
Reviewed in the United States on July 23, 2019
Size: 1.8W AmorphousColor: BlackVerified Purchase
This works really well for us to keep a battery charged on a jet ski at our vacation home . Now our battery is always ready to go when we are!
Read more
26 people found this helpful
Helpful
Comment Report abuse

TomB
5.0 out of 5 stars This product has performed exactly as advertised.
Reviewed in the United States on July 23, 2019
Size: 1.8W AmorphousColor: BlackVerified Purchase
I did not use the suction cups. I did not get it wet either.
It makes an excellent trickle charger.
Read more
26 people found this helpful
Helpful
Comment Report abuse

Johnna Smith
5.0 out of 5 stars Works great
Reviewed in the United States on July 22, 2019
Size: 9W AmorphousColor: WhiteVerified PurchaseEarly Reviewer Rewards(What's this?)
Use on my camper battery to keep a charge when not in use. Has been working great.
Read more
25 people found this helpful
Helpful
Comment Report abuse

Jay Jay
5.0 out of 5 stars Easiest way to maintain a full charge
Reviewed in the United States on June 24, 2019
Size: 1.8W AmorphousColor: BlackVerified Purchase
I use this product to keep my motorcycle charged up and ready to ride. It’s perfect and I can’t believe the price. Thank you
Read more
23 people found this helpful
Helpful
Comment Report abuse
See all reviews