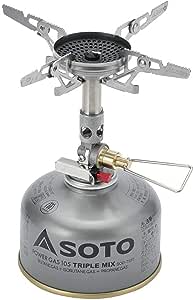 Meticulously engineered and crafted the 3.1 ounces. Soto WindMaster ultralight backpacking stove outperforms its competitors by maintaining a strong flame on stormy, blustery days. WindMaster includes a stove body, carry bag, and 4-Flex Support. Designed to position pot close to the flame making it nearly impossible for the wind to penetrate the stove's flame. With the installation of the micro regulator, the WindMaster is able to maintain a consistent output when challenging the limits in this category of stoves. The stove is shock resistant. The stealth igniter installed inside the burner post improves ignition and prevents breakage. Output: 2800 kcal/h 3260w 11000 BTU

4.8 out of 5 stars
4.8 out of 5
167 global ratings
How are ratings calculated?
To calculate the overall star rating and percentage breakdown by star, we don’t use a simple average. Instead, our system considers things like how recent a review is and if the reviewer bought the item on Amazon. It also analyzes reviews to verify trustworthiness.

Jamyl S Tan
5.0 out of 5 stars The 3-season Stove as far as I'm concerned.
Reviewed in the United States on June 10, 2019
Size: One SizeVerified Purchase
Used a BRS for the past 2 years, decided on getting another stove, because why not. The wind screen I had was annoying to store, and the thought of needing to re-make a foil one after every other trip wasn't appealing.

I'm glad I got this model. It's quiet, it's light, you don't need to bring a secondary spark to light the stove, and the four prong attachment it came with is stable. It fits inside the 30oz Ti Snowpeak pot fine (with the prongs, a small sponge, a collapsible set of chopsticks, and a zippo. I ended up getting the 3 prong attachment for weight savings, but I can see where previous complaints of stability came from: it's much smaller.

WindMaster indeed: I just used my body/a tree to block most of the wind, and it's fine. It's heavier than some other stoves, but you save on not needing a wind screen. It can get reasonably low power on the flame in milder weather.

If you're not going to gamble on getting a BRS that doesn't melt and don't mind something a bit heavier (25g vs 65g~), then get this stove.

Tetsu Noguchi
5.0 out of 5 stars real wind protection, broad range for flame strength
Reviewed in the United States on November 22, 2013
Verified Purchase
So, I've had some time with this unit and while it's too bad that it doesn't fit in a cup along with a gas canister and utensil, which would be ideal, this gas canister based unit has one incredible advantage in addition to the wind resistance, and two small negatives.

First, a negative. When screwing this stove onto a gas canister, or unscrewing it, there is a slight leak, which wastes fuel. In a situation where every bit of fuel counts, that is not ideal. The smaller Soto Compact Folding Stove is better at this and does not leak.

Second negative. The bag that it comes in is super flimsy. Since this unit needs to be separate from the cup, I wish it had a more structured, durable, and protective case. Here again, the smaller Soto Compact Folding Stove wins, as it has a really great structured canvas case, which is a bit of a waste since the big advantage of the compact is that it's small enough to fit in a cup with a canister. This Windmaster needs a structured case.

Third is the positive and oh what a positive it is. Of all the gas canister stoves I have (jetboils, gigapower, Soto Compact), and even including some of my liquid fuel stoves, this Windmaster has the best simmer control. And by "Best" I mean UNREAL levels of simmer throttling. Wow....just....wow.

If I were heading out on an extended trip and my primary was a gas canister stove and a few gas canisters, and I knew I wanted to do some cooking, this would, without a doubt, be the stove I would bring.

Combine this stove with the Optimus Terra Weekend HE .95L Pot and you have a cooking set that is absolutely rock solid for just about all the basic solo backpacker's cooking needs. It would serve just as well.

Incidentally, I also purchased the optional 4 bar pot support for the Windmaster, and this makes larger pots very stable.
NOTE HERE: For larger pots, the Windmaster does cause a hot spot, since all the flame is directed straight upwards. If you have a good wind screen or heat reflector, the Soto Compact Folding stove is a better fit because it directs the flame outwards instead of straight up, which spreads heat a little. A good example would be the Optimus Terra HE 3 Pot Cook Set (I don't own that set, so just guessing, of course).

Either way, if you're looking for a compact gas canister stove, and plan on doing cooking in the field with a requirement for decent simmer control, you won't find better for 3 season backpacking.

When they say "wind"master, they're not kidding.

This may not be the smallest pressurized gas canister based stove out there, but it is shockingly effective.

If you read the marketing material, the design of the flame expulsion point is the key. Most others have a convex cone or dome shape, so wind can put out the flame. The Windmaster has a tiny wall going all around the edge, but also the wide diameter flame expulsion surface area is concave, making it harder for wind to blow the flame out.

That flame expulsion area is really a wide diameter, so when the flame is going full blast, it's pretty potent.

But the Windmaster has another advantage: the flame throttling thing (no idea what it's called) doesn't go from zero to full blast in half a turn, it actually is much more fine tuned than that, requiring several turns to go from zero to full blast. That's a good thing, because it gives much more control over the flame strength than I thought was possible with a unit this small.

It's small enough to fit into a GSI Halulite mug, but you can't fit a gas canister in there as well. It's one or the other. On the plus side, you could have this, a silicone pot holder, and maybe a small or folding utensil in the mug.

All in all, for ultralight camping, this is a definite plus, and from a control and flexibility perspective, it gets an automatic 4 stars in my book.
Read more
60 people found this helpful
Helpful
Comment Report abuse

Tito
5.0 out of 5 stars Love This Little Stove - Has Everything You Need
Reviewed in the United States on June 23, 2019
Size: One SizeVerified Purchase
I bought this to take with me on a one week trip into remote wilderness, where primary mode of transportation was canoeing and hiking. We did some actual cooking on this, as well as boiling water and this thing is awesome! The 4 prong pot attachment could support anything we threw at it. The piezo lighter and simmer control was dead simple to use. The lighter worked reliably every time. Boil times far surpassed my white gas MSR Dragonfly stove that I had been using (which I still love, btw, since it would survive the zombie invasion). A pleasant bonus of the Soto was how quiet it is. Other similar "pocket rocket" stoves are super loud and give the feeling that they could take off at any moment. Kinda defeats the purpose of relaxing in the woods. Soto went to great lengths to prove that something could be windproof, fast-boiling, and quiet all at the same time. The one niggle with this stove is that the 4-prong pot stabilizer is a separate attachment. It's not as slick as some of the stoves where this part is integrated with swiveling prongs. Soto used to provide both a 3 prong and 4 prong attachment. But lately, Soto is just including the 4-prong. For people counting grams (you know who you are, stop that!) it could make a difference. Not a deal-breaker, and I certainly would buy this one again. But here's hoping Soto considers an updated model where everything is integrated. Until then, I will happily be using this little gem. At least until the zombies attack.
Read more
7 people found this helpful
Helpful
Comment Report abuse

seadog76
5.0 out of 5 stars Fast, stable, strong, windproof
Reviewed in the United States on August 19, 2019
Size: One SizeVerified Purchase
I chose Soto over the MSR PocketRocket Deluxe. They’re very similar, but Soto had the original wind proof design, and the removable 4Flex arms on Soto feel more stable to me. MSR has a floppiness in one arm that made me worry about stability, Soto is rock solid. I tested this out a few times with a full-size pot of water and 12 hot dogs, absolutely no issues attached to an MSR can. When heating a more typical light camping pot, this thing is a speedy flamethrower for boiling water, I love it. And I’ve tested it in windy Wisconsin sites as well as rooftops on super blustery Chicago days, it’s never gone out. The piezo works really well as long as your fuel regulator is up high enough, about 1.5 turns, otherwise it might take a few clicks. The simmer control works really well to control flame size too, and it’s very quiet, my wife didn’t realize it was on. Very lightweight, packs up into backpacking pots.
Read more
6 people found this helpful
Helpful
Comment Report abuse
See all reviews

Mr A R Hills
5.0 out of 5 stars A great addition, fast fairly quiet and pretty compact.
Reviewed in the United Kingdom on March 23, 2020
Size: One SizeVerified Purchase
I didn't need this Stove but being a stoveaholic I couldn't resist.
I have many ways to boil water etc but I really like this stove, works well even in the wind (moderate wind tests so far) is pretty quiet unless at full bore and its very quick to boil water ( I use toaks 1600 ml titanium pot or zebra 14cm lunch pot)
I'm tending to take this out instead of of trangia burner because it's so quickbut I do like the total silence of the spirit burner.
Read more
Report abuse

Byron
5.0 out of 5 stars Light weight stove
Reviewed in the United Kingdom on August 3, 2019
Size: One SizeVerified Purchase
Used for a couple of long distance trails it’s now become a firm favourite. Please note stove has to be screwed home to action the valve on some gas canisters, not sure of the build quality on some canisters.
Read more
Report abuse

Nigel Evans
5.0 out of 5 stars Brilliant piece of kit
Reviewed in the United Kingdom on July 2, 2019
Size: One SizeVerified Purchase
This really is a great bit of kit - used it for the first time at a 24 hour running event where I had 50 minutes between runs and it was brilliant- a kettle of water boiled so fast so I could make my food with time to spare - Would highly recommend it
Read more
Report abuse

Mark Briggs
5.0 out of 5 stars Great stove
Reviewed in the United Kingdom on April 17, 2020
Size: One SizeVerified Purchase
Great stove but ‘does not’ now come with triflex pot stand
Read more
Report abuse
See all reviews