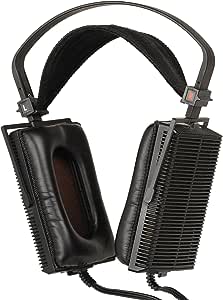 Brand: STAX
4.1 out of 5 stars 11 ratings
Available from these sellers.

A.G. Neimanis
5.0 out of 5 stars Headphone search is over!
Reviewed in the United States on April 25, 2016
Verified Purchase
Purchased along with the SRM-323S energizer and this combo does not disappoint. I have had many headphones through the years: Koss, Sennheiser 650, AKG Parabolics, Beyerdynamic 880 and Etymotic ER4s. The Stax 507s paired with the 323 beat them all. They possess a clear, uncolored, spacious sound with nicely proportioned bass. For me, the stereo picture knits beautifully around my head, Extremely revealing of the source material and non-fatiguing. They have such a clean sound that I find it takes a bit of care to achieve an optimal sound level since the lack of distortion makes it very easy to play them at high volumes. Very comfortable for long listening periods. You will hear what's on the source material; nothing more, nothing less.
Read more
8 people found this helpful
Helpful
Comment Report abuse

dDave
5.0 out of 5 stars High End Headphones
Reviewed in the United States on March 8, 2016
Verified Purchase
I got these to surpass my old Stax Lambda Earspeaker headphones (predecessor to the lesser 407s) that might not be repairable. These new headphones are excellent as far as I can hear but I might no longer be able to distinguish all of the excellence since my hearing is starting to go. They certainly sound sweet and have pretty good bass extension (no headphones set beats a subwoofer for making the body cavities and surrounding furniture and floor vibrate). The smooth extension of the sound has not really been challenged with great sound sources using my CDs so I have to test further using excellent CD and other audio sources. One weird but helpful feature is the ability to use the 118 db maximum output capability to have these new Earspeakers act as mini-speakers when I don't want to listen with the headphones on and also don't want the 5.1 system to annoy my sleeping roommate.
Read more
6 people found this helpful
Helpful
Comment Report abuse

cody wyoming
5.0 out of 5 stars What the HD800 should have been
Reviewed in the United States on July 13, 2017
This headphone (along with a Stax SRM-727a amp) is the finest audio experience of my life. If you're used to dynamic drivers, it'll be a shock the first time you hear what music is supposed to sound like. There is ZERO muddiness anywhere in the spectrum. Every frequency is reproduced cleanly and separately from the others. Voices and instruments sound so realistic, in unfamiliar music I'll often think someone is in the room with me, before realizing it's just the recording. Most concert venues don't sound half as clear.

If the sound balance right out of the box isn't what you're looking for, (like the confuddled fellow who inexplicably gave these 3 stars), not to worry, they respond perfectly to an EQ, and will take on whatever sound signature you desire, at whatever volume (these sound just as good quiet or ear-bleedingly loud). Personally I like boosting 200hz ane below by 4db or so.

Most everyone talks about the mids or the highs, which are indeed world-class, and sharper and crisper even than any planar magnetic driver can manage. But for me (an EDM & hip-hop listener) the bass was the real revelation. Where even the best dynamic speakers produce a deep indistinct boominess, these can articulate the bass exactly, and you can suddenly tell the difference between a 20hz and a 22hz tone.

Even the sennheiser HD800 sounds slow and artificial sounding compared to the Stax. I haven't heard other electrostatic headphone systems (be it other Stax models, the Koss ESP950, or the absurd $10,000 Sennheiser HE50), but no dynamic, no planar magnetic driver can come close to doing what this Stax electrostat can.

Obviously your source matters, but even streaming soundcloud from the headphone jack on my phone sounds phenomenal through these. Using a hi-fi DAC such as the Mojo or GOV2+ is even better of course, but the gap between my phone (an LG V10 with a relatively great DAC to begin with) and those hi-fi dacs isn't nearly as great as the gap sounds when using regular headphones. I prefer a DAC that gives a lot of body to the music, such as the Hifiman HM601. Using a bright DAC might not be the best pairing.

While the astounding sound quality is the most important thing, I'd like to say a few words about build quality and comfort. The build quality is nothing special, they seem to be made of a cheap plastic, but I've learned that a cheap feel does not mean it's actually flimsy, but I baby mine anyway just in case. As these are the least portable headphone type on the market, that's not much of an issue. They will never leave the room where their amp is set up.

Comfort-wise, they are exceptionally comfortable. They weigh very little, and exert almost no clamping force on your head, but somehow they never slip off while you're wearing them either. The main issue related to comfort is the fact that they rely on static electricity to produce sound, and bumping your hand to the outside of the case can cause a quick grounding on that side, and you will only hear through the opposite side for a minute while it builds up a sufficient charge again. It's a minor issue that's inherent to the technology.

IN CONCLUSION, these are the best headphones I have ever heard, they put most $1,500 pairs to shame (ahem HD800 ahem), and if you know how to EQ for yourself, there is no reason you wouldn't be blown away too. No one who gives it a fair chance will ever give it less than 5 stars.

hugh parker
5.0 out of 5 stars Remarkable Sound
Reviewed in the United States on February 24, 2015
I have a set of Stax Lambda ear speakers I bought in the late 70s. I've replaced the pads a couple times over the years. The Stax are as unbelievably clear now as they were when I first bought them. I also have a pair of the Stax 009s. They're incredibly clear, also, but I don't think they're worth the money compared to the Lambda.

On the other hand, you'll hear producers like Gary Katx, and you'll be pretty much paralyzed by the beauty of the music. Katz produced a lot of Steeley Dan's music. SD used studio musicians, who are perfectionists, and the Stax will reveal how really good the music is.

I know there's a lot of money involved with the Lambda, but it will be more than worth it. Amazon has great pricing on the Stax--and other high end headphones. But I think it's necessary for you to find an store specializing in audiophile hardware, and listen to the Stax before buying them through Amazon. You may think that the 009s are worth the money, but listen first.
Read more
15 people found this helpful
Helpful
Comment Report abuse

one consumer
5.0 out of 5 stars My review
Reviewed in the United States on February 17, 2014
This is the top of the Stax Lambda line. It is very transparent sounding. The treble is extended and is grain-free. The midrange is close to flat. The SR-507 is very detailed. Decay is faster than with dynamic headphones. Transient response is liquid-like and natural. The sound is analytical. The bass is tight and has excellent restraint, but this is not the strength of these phones (other dynamic or planar magnetic phones can exhibit more bass). However, this doesn't detract from the enjoyment of these phones.
Read more
32 people found this helpful
Helpful
Comment Report abuse
See all reviews

Page 1 of 1 Start overPage 1 of 1
This shopping feature will continue to load items when the Enter key is pressed. In order to navigate out of this carousel please use your heading shortcut key to navigate to the next or previous heading.
Back
Next
Pages with related products. See and discover other items: Over-Ear Headphones, Air Cleaners for Pets