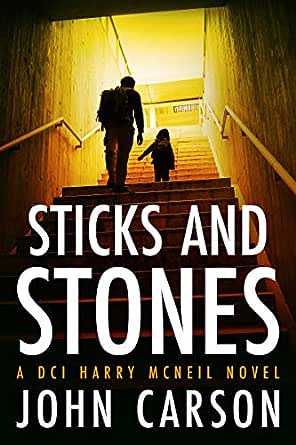 You've subscribed to A DCI Harry McNeil Crime Thriller! We will preorder your items within 24 hours of when they become available. When new books are released, we'll charge your default payment method for the lowest price available during the pre-order period.
Update your device or payment method, cancel individual pre-orders or your subscription at
Your Memberships & Subscriptions
There was an error. We were unable to process your subscription due to an error. Please refresh and try again. 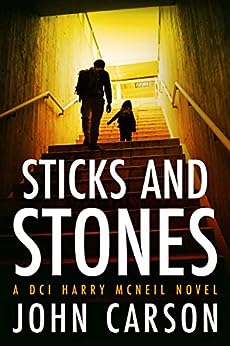 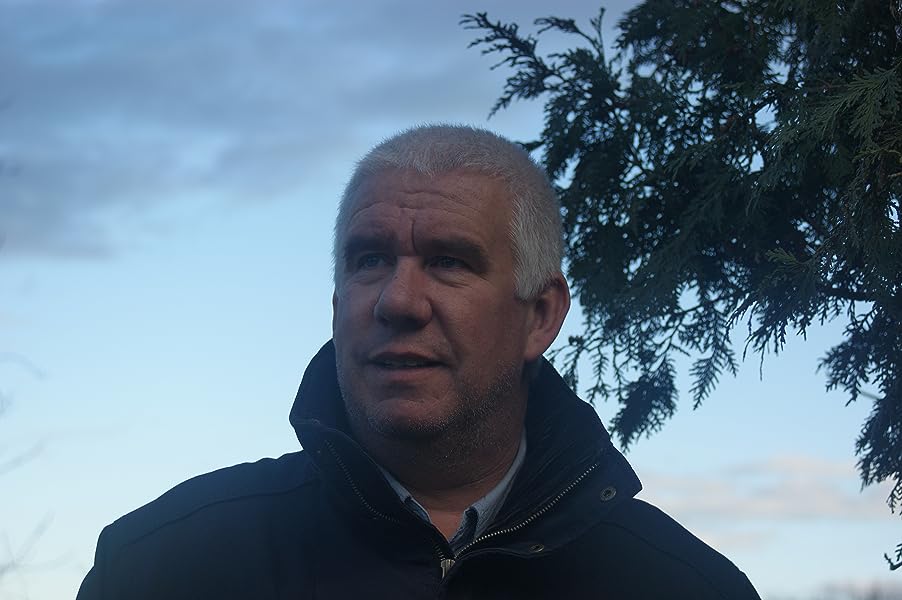 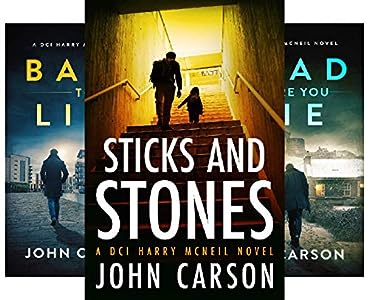 4.2 out of 5 stars
4.2 out of 5
348 global ratings
How are ratings calculated?
To calculate the overall star rating and percentage breakdown by star, we don’t use a simple average. Instead, our system considers things like how recent a review is and if the reviewer bought the item on Amazon. It also analyzes reviews to verify trustworthiness.
Top reviews

luvourdog
1.0 out of 5 stars Don't Bother
Reviewed in the United States on August 28, 2020
Verified Purchase
Disjointed, it is often difficult to know who is speaking, as rarely, in a page of dialogue among 2-4 characters does it ever say "so and so said" or " so and so replied" to give you a clue who is speaking, you feel as if you need a crystal ball to figure this out. Many things do not add up. The book starts with one character named Maggie...somehow, without explanation this person later becomes Dee, then Claire. Claire is supposedly a young friend of the bride, but later is one of the stepmother's oldest friends? The groom and two attendants are supposedly waiting in a room to be interviewed by the arriving detectives, one assumes the police put them there.
One attendant is interviewed, the other is done in more or less a sentence or two, and none of the cops make mention of or ask about the whereabouts of the groom that was supposed to be there, too, until more than a day later, when normal procedure would have been to drop everything and immediately find out where this guy waiting to be interviewed went. A statement is made that all of the lodges on the property had been searched, but then you are dumped into a group approaching one to search it, and later find out there were people in one of more of these "searched" lodges, at the time of the supposed searches. Gives you the impression these cops are really spacey and more focused on poking fun at each other than on the investigation. Police believe a man found hanging from a doorknob with his hands tied behind his back is a suicide, no question at all??? So did he tie his own hands behind his back, then somehow get the ligature around his neck and the doorknob, or did he put the ligature around his neck and hang himself first, then tie his hands behind his back?? Makes no sense, either way is impossible. This often reads like two different stories, written in haste and smashed together, or something written by several different authors and merged. Motive is weak and the dialogue between main characters is very unrealistic, unprofessional and often seems pre-teenish with much of the conversation between the main officers consisting of them more or less accusing each other of having the hots for every other person encountered or questioned. There is not really any suspense, any mystery is lost, but there is a lot of confusion. Badly in need of a good editor or a major rewrite. Don't bother...am really glad I did not buy the subsequent titles in this series.

HokieChick
1.0 out of 5 stars One and done
Reviewed in the United States on February 9, 2020
Verified Purchase
No, thanks. I liked the complex structure of the story but that was all that I liked. The story was gruesome in a pointless way, killing off characters like flies to be swatted. The civilian characters who didn’t die were obnoxious. Although I liked the two main characters’ personalities and relationship, the story as a whole was sour. No more for me.
Read more
3 people found this helpful
Helpful
Comment Report abuse

Douglas Broughman
4.0 out of 5 stars A GOOD READ WITH A LOT OF SUSPENSE
Reviewed in the United States on October 29, 2019
Verified Purchase
AS AN AMERICAN READING A SCOTTISH CRIME NOVEL, I HAD A LITTLE TROUBLE WITH THE SLANG. IN SPITE OF THAT, I FOUND THE BOOK AND CHARACTERS TO BE VERY ENTERTAINING AND IT WAS HARD TO STOP READING. MR. CARSON DID A JAM UP JOB OF PROVIDING TWISTS AND SUSPENSE.
Read more
3 people found this helpful
Helpful
Comment Report abuse

Donna Dee
5.0 out of 5 stars Excellent story
Reviewed in the United States on November 24, 2020
Verified Purchase
I love this series and characters, they’re well written and the stories always have a nice twist and turn in them. This one doesn’t disappoint, it was full of twists and humour and enjoyable as usual.
Read more
Helpful
Comment Report abuse

Wendi F
1.0 out of 5 stars not the book inthe title
Reviewed in the United States on September 6, 2019
Verified Purchase
this is actually a book called God Complex which sadly i aready bought and read. so now i paid for it twice. God Complex was good though but don't buy this if you read that as its throwing away money.
Read more
2 people found this helpful
Helpful
Comment Report abuse

Amazon Customer
5.0 out of 5 stars A must read!
Reviewed in the United States on August 31, 2019
Verified Purchase
This is truly one of the best! Easy to follow and hard to put down! Keeps you on the edge of your seat the hole time. Can’t wait for the next book in the series!
Read more
2 people found this helpful
Helpful
Comment Report abuse

Verified Customer
5.0 out of 5 stars My New Favorite Author!!
Reviewed in the United States on November 30, 2020
Verified Purchase
I recently found this wonderful Author, John Carson, and have been reading
all of the Harry McNeil books. Really am enjoying them. Thank You John Carson!!!

L. Kelly
2.0 out of 5 stars Not great
Reviewed in the United Kingdom on September 25, 2019
Verified Purchase
I had to check a couple of times to make sure I was reading the first book in the series as I just couldn't connect with the characters. On several occasions they had a bit of banter but it came out of the blue - it was as if we were supposed to know the characters already and understand the dynamic between them, almost as if they were mid conversation and the reader only gets to read half of it. There were several flaws in the book that, having read many books in this genre, I noted - no clear indication of any forensic protection, i.e., wandering into potential crime scenes without stating that they'd donned any protective gear etc. Generally it was a tough read and the characters had no depth. Based on this book, I wouldn't add any further Harry McNeil books to my collection.
Read more
15 people found this helpful
Report abuse

Ben Wright
1.0 out of 5 stars Do not buy this author's works
Reviewed in the United Kingdom on September 18, 2019
Verified Purchase
I thought that the story line was poor and the writing was even worse. I made the mistake of also buying Crash Point and Old Habits before reading Sticks & Stones. I really do wish I had not - both were even more infantile than the first!
Read more
12 people found this helpful
Report abuse

Mrs. B. J. Bartley
5.0 out of 5 stars First Harry McNeil investigation and hopefully the first of many more to come
Reviewed in the United Kingdom on September 6, 2019
Verified Purchase
After reading all the Frank Miller books I didn't think a new DCI character would compete favourably but this story was fast paced with lots of twists and turns and a very surprising ending. Full of John Carson's humour too which is a bonus . DCI Harry McNeil is a winner!
Read more
4 people found this helpful
Report abuse

Sarah
5.0 out of 5 stars Excellent debut for Harry McNeil
Reviewed in the United Kingdom on September 27, 2020
Verified Purchase
What should be the best day in their lives turned out to be the worst for a newly wed couple. The scene was set in a beautiful hotel, the bride and groom went missing. What could have happened to them and who would want to kidnap them?
There were plenty of twists in the plot of this novel. Very easy to read by a new author in my reading collection. Highly recommended to fans of Ian Rankin and Lee Child.

Katkin 22
5.0 out of 5 stars When Kat met Harry
Reviewed in the United Kingdom on August 5, 2020
Verified Purchase
What a great introduction to Harry, Alex, Karen and Simon. Sticks and stones gave us a hint of what was to come from this small unit, Harry and Alex in particular. I must admit I wondered at first if Harry was one of the two traumatised children but it soon became clear that he couldn’t be. The story had a good plot with a few surprises. Will definitely be reading more from this author.
Read more
Report abuse
See all reviews