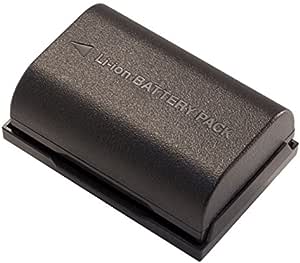 STK LP-E6 Battery Replacement 2600 mAH - for Canon LP-E6 Battery, Canon EOS 6D, 7D and 7D Mark II, 70D, 60D, 5D Mark II Mark III and Mark IV, 80D, 5DS, and 5DS R DSLR Cameras, and BG-E14, BG-E13, BG-E11, BG-E9, BG-E7, BG-E6 Grips. STK LP-E6 Battery is made to exceed the OEM charging capacity. We have worked hard to give you the finest quality Canon LP-E6 replacement battery available. 1 Year Full Warranty: We will replace this or any other item that you purchase from us for 1 year from the date your order is processed if it fails under normal wear or is defective. We always sell new high quality items and we are willing to back them up SterlingTeK ads images and text are protected by trademarks and copyrights. Copyright 2014 SterlingTeK.

4.6 out of 5 stars
4.6 out of 5
4,437 global ratings
How are ratings calculated?
To calculate the overall star rating and percentage breakdown by star, we don’t use a simple average. Instead, our system considers things like how recent a review is and if the reviewer bought the item on Amazon. It also analyzes reviews to verify trustworthiness.

John Magera
1.0 out of 5 stars My apologies for a premature review. Excellent batteries
Reviewed in the United States on December 1, 2017
Verified Purchase
UPDATED REVIEW!

(Junk. I took a gamble and bought two of these to replace my factory Canon batteries in my 7D. What a mistake. These won't hold a charge and die within 200-250 shots. They also won't communicate with my 7D. What a waste of money. Should have just paid the premium for the real thing.)

Above is my initial review because I thought these batteries were not working properly. Turned out, it was my camera that was the problem. I had the classic "little loose screw" inside my Canon 7D body that causes battery connection problems. I YouTube'd the solution (which I was able to do myself) and these batteries now work like a champ. I really, really appreciate the way STK handled my complaints and replaced my batteries with no questions. These are legit, as is the company that stands behind them. I'm not sorry I posed the negative review and want folks to know if they are having the battery error problem I had with their 7D, it's the loose internal screw that's the problem, not these batteries. Thanks STK!

N. Thompson
3.0 out of 5 stars They work! but....
Reviewed in the United States on February 27, 2014
Verified Purchase
Sp, I will begin by saying that I have been on the market for new batteries to help releive the burdon I have put my OEM LP-E6's under for the past few years. I was heavily leaning towards a new set of OEM batteries, I don't like to put knock off anything into my 5dii, BUT I decided to look at different brands anyways. I was intised to look further into the STK offering mainly for their high reviews and their larger capacity, oh and th price is amazing as well.

I looked at the reviews from a few years ago, to make sure no one made an update saying that they worked fine for the first year and then crapped out. Nope, nothing but shinning reviews. So I then checked the less than stellar reviews, and there are A LOT of them, I noticed that most of these one star reviews complained that the battery life was less than stellar, but I also noticed that STK was diligent in trying to resolve this matter. I also noticed that most of the negative reviews have happened n the last 3 months. I figured that there are some quality controll issues that have happened as of late and it would apear STK has reached out to resolve conflicts. For me I saw this as a chance to give them a shot, I'd only buy one pair of batteries and only be out $30 if I got duds, plus I had their customer service information posted everywhere on these reviews so I coul contact them if I needed.

Two days later I received y atteries, I put them in the canon oem charger, charged both batteries and began to shoot images, I usually shoot about 300 images a day, just part of my profession so I was a little shocked when I looked at the battery information an after only 30 images on battery one and 40 on battery two I had dropped to 60% on both batteries, I reacharged these batteries while I continued to use my OEMs, a short while later I gave them anoher go, and was sorely disapointed again.

I gave STK a quick phone call, instead of just coming straight to amazon and blasting the product like so many others have. I left a message with all my information, the next day I received an apologetic phone call, the sales rep quickly explained that it is due to the fact that stk batteries have that higher capacity that the OEM charger shuts off when thy reach the OEM capacity, with out hesitation STK overnighted me their charger AND a second set of batteries, no charge. I charged their batteries with their charger and yes it takes a noticbly longer time to charge now, as I would expect. I have tested these batteries thouroghly now with my 5Dii both sets and have compared them to the OEM performance, I work in a controlled environment and most of my shooting happens at 70* I know I won't be maxing out the shooting ability of these batteriess, and I perposfully leave my equipment on 24/7 to get a good idea of minimum performance, maximum performance is ok, for benchmarks, but minimum, as a working pro, is where I need to know when to change batteries. So minimum shots with two batteries, using the STK charger, 885 images, using the OEM charger, 445 images. OEM battery Performance under ame conditions, 780 images, OEM charger of course.

So, yes these batteries perform noticably btter than the OEM's and I would expect that with their higher capacity. Now I'm a little ticked, and thus the reason for the 3 star review. This problem has been going on for months, STK has addressed this problem with customers repeatedly, they obviously know how to fix it, why not give an ordering option when buying these batteries, like a buddle product, and a warning saying that battery performance is serverely limited when only using an OEM charger? The batteries work fine, but only if you buy the STK charger.... This would save a lot of hassel on the customer end and I would guess give STK an avenue to make more money, if everyone buys their chargers insted of STK giving them away.

I gues this is an opinion, but I do reccomend this product, these batteries work exactly as you woulld expect, they ARE built well, and they DO work flawlessly with Canon's systems. But the only reason STK is receiving a 3 star review for this product instead of a 1 star is because of their amazing customer service, This is a horrible way to represent a product and is misleading to the consumer, especially when the fix is known and simpe
Read more
219 people found this helpful
Helpful
Report abuse

C. Pruden
4.0 out of 5 stars Just doesn't hold up - retracted
Reviewed in the United States on January 27, 2019
Verified Purchase
Well, I bought this battery at the same time as when I got the Canon 5D M4 and after a year, this battery just doesn't hold up as well as the Canon battery. I bought the STK LP-E6 with the STK charger and that is the charger I always used to charge this battery. I charge the battery fully, put it in the camera, and after a few minutes, it shows the charge has dropped a bar on the battery indicator. Not long after that and taking just a couple of pictures, it shows half charged on the indicator. So, what is the difference between this battery and the Canon battery construction? I don't know. You would think they would be manufactured the same - are the materials inferior?

I guess you can figure the cost is about 1/3 of the Canon battery, so even if you buy 3 of these a year apart you come out the same.

Update: The battery is holding a charge better now. It must have been because of the cold conditions I was in at the time. I believe this is true with any lithium battery.
Read more
12 people found this helpful
Helpful
Report abuse

SD Lover
2.0 out of 5 stars Very short battery life
Reviewed in the United States on July 5, 2019
Verified Purchase
I shoot weekly on average about 200 raw photos. I have one Canon battery and one STK LP-E6 battery which I alternate. I bought the STK at the end of June 2018 from Amazon. I never had a problem until a couple of weeks ago the STK battery would not hold a charge. Then it died completely. My Canon battery which admittedly costs way more than this battery holds a full charge and regardless of how many raw photos I shoot, it keeps performing without a problem.
Since I alternate each time between batteries, the STK only lasted about a half a year.

If you prefer to buy a cheap battery and replace it every six months, then get the STK. If you don't want the inconvenience of doing that, spend a lot more but have the confidence your battery won't stop when you're in the middle of a shoot. And be sure to always carry an extra fully charged battery with you. As with most everything, you get what you pay for.
Read more
6 people found this helpful
Helpful
Report abuse

Head Cheeze
1.0 out of 5 stars Purchased Four, Three Either Dead or Not Recognized
Reviewed in the United States on September 23, 2018
Verified Purchase
Got sucked in by the positive reviews and bought four of these. Should have know the price was too good to be true. Worked decently the first wedding I shot. Replaced my Canon LPE6's during reception and, while I did notice they seemed to die down fast, I got through it. Second wedding, however, the inconsistency reared its ugly head and I got one not recognized while the other three, despite being "fully charged", showed up as half-charged and died within 40 mins. Thankfully I had a set of OEM batteries on a mobile charger and was able to replace without missing any crucial moments, but it was a nail biter. If you're a hobbyist, MAYBE worth having in a pinch, but pros steer clear.
Read more
9 people found this helpful
Helpful
Report abuse
See all reviews